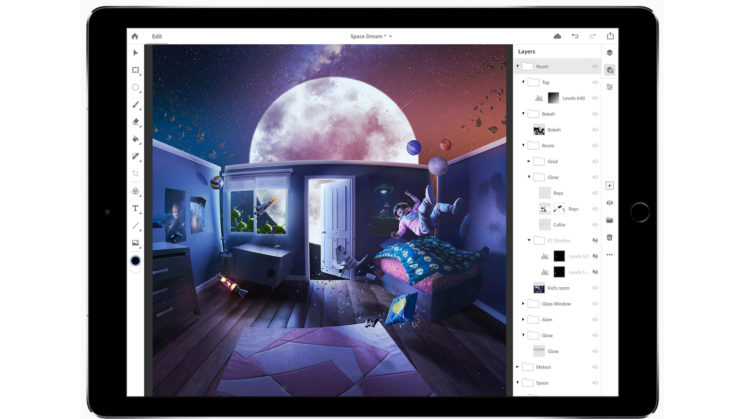 It’s over a year since it was first reported that Photoshop was coming to the iPad, promising pretty much the complete version of the software you get on the desktop, but for your Apple tablet. Now, Photoshop CC for iPad is almost ready to be launched but according to a report on Bloomberg, it has some key features missing.

Bloomberg says they’ve been in touch with some of the Photoshop for iPad beta testers, which has been going under the codename “Rocket”. They say that the testers have complained that some of the beta versions don’t include some fundamental tools available in Photoshop. Tools like the pen tool, custom paintbrush libraries, filters, vector drawing, colour spaces, raw editing, smart objects, layer styles and various mask options.

They that one tester told them that “feature-wise, it feels like a beefed-up cloud-based version of their existing iPad apps and not ‘real Photoshop’ as advertised”. And while the software is supposed to be based on the desktop version code, although optimised for touch, one tester says “it doesn’t feel like it right now”.

Chief product officer of Adobe’s Creative Cloud division, Scott Belsky, said in an interview that the beta feature set doesn’t represent the final version for consumers. But he also said that the need to collaborate with Apple means that many features are “coming in hot” ahead of the launch, although some familiar features will be missing at launch.

Launching every single feature that was accumulated over 25 years on the iPad on day one would not best serve our customers and the needs they have.

He says that Adobe “will definitely expand the capabilities” of Photoshop on the iPad over time. With Apple pushing Photoshop as a key selling point for the iPad Pro tablets since the app was announced, this is likely to disappoint some people. While the software does seem to be on track for release at the end of this year, there’s no telling right now exactly what features will be included at launch and which will come later – nor how long they’ll take to arrive.

It makes sense that they wouldn’t really be able to introduce the full power of Photoshop on the iPad right away, even with 18 months between the announcement and release time. But hopefully, soon we’ll be able to find out exactly what features will be missing at launch and how long it’ll be before we see the rest of them. Or at least some kind of confirmation of what will or won’t be coming to Photoshop for iPad.

It will be interesting to see exactly what they do bring in the initial release, though, especially as the competition is a little stronger now than it was when Photoshop for iPad was initially announced. Affinity Photo for iPad has come a very long way since then and has become extremely popular amongst iPad Pro users.