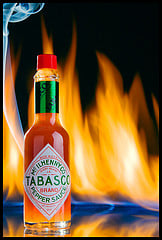 How did I manage not to burn the house down??

Well, first, my wife was not at home, LOL… and second, with the remote trigger in one hand, and an extinguisher in the other… just in case!! ;O))

This is what Filipe Batista had to say when I wondered how he took that shot. The extinguisher bit is enough to hint that no Photoshop was used to create the fire and as they say it the magic industry. Don’t worry, that fire is harmless. Unless you touch it.

Filipe was kind enough to share the secretes behind this fire spectacle with DIYP readers:

I needed a firm setup, regardless of the fire. I started to build the setup step by step, adding lighting elements as I go.

First, I put the Tabasco bottle on a 60x90cm, 8mm thick transparent glass, supported by two wood stands. This has to be real glass. Pleaxi won’t do any good here.

I started with the key light: I placed the first strobe (softbox, front/right) in order to get a pleasant reflection. I then made a test shot to adjust exposure.

The shot came flat, so I added a second strobe: a Canon 580exII on the ground, under the glass and pointed up to the base of the Tabasco in order to get the glow on the bottle and illuminate the spicy mixture.

After that I decided to add a third strobe (umbrella, behind/left) to get a rim light that helped to define the left side of the bottle.

Just to get a taste of the process, here is the shot with the underfill and rimlight, and a shot with the key light and rim light. 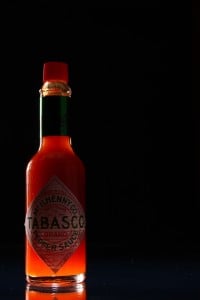 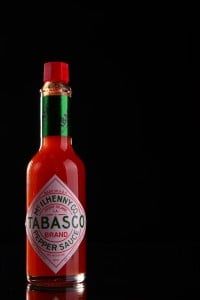 As a final touch I added the white cardboard (front/left), just for fill a little bit.

The lights were set, I ended with f16 and 1/200s of exposure. Here is the setup diagram (made with Kevin Kurtz’s excellent lighting diagram tool) 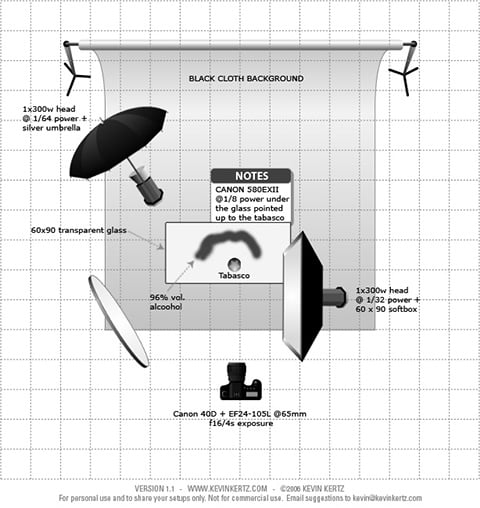 After setting the lights, came the fire part. YES!

I dropped some 96% vol. alcohol on the glass, about 20 cm behind the Tabasco bottle… ignite and…

I soon realized that with 1/200s no flames were visible on picture so I had to reduce the exposure time, and after more test shots (and almost half of an alcohol gallipot) I ended up with 4 seconds of exposure.

Four seconds is a long time. The modeling lights of the strobe had to be eliminated. With an exposure that long, they changed the lighting completely.

Four seconds also dictated locking focus before the shot. I also used the mirror lock up option to avoid any shake and remote cable to release the shutter.

The only trick I had to manage was to ignite the alcohol about one or two seconds after releasing the shutter to get a nice big yellow/orange flame behind the bottle, and to avoid overexposure of the flames…

At that point and with already half a dozen of usable shots, I thought that a little bit of smoke getting out of behind the bottle would be nice, so I grabbed two incense sticks and put them just behind the Tabasco… et voila!

Not much post done on this image. A bit of a push on Adobe Raw, a bit of healing brash dust removal magic and your usual levels/contrast/saturation to give a little bit of punchy colors…

Now go back to the opening of the post for safety rules.

This Youtuber made a real, working lens using sand and rocks