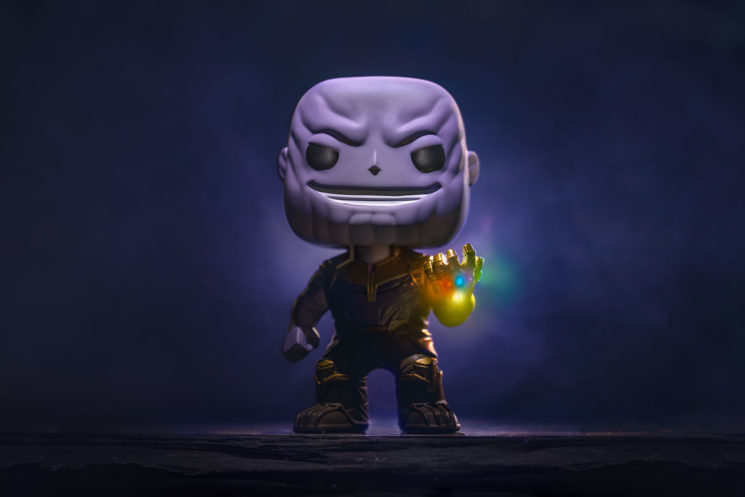 With all the hype and waiting for the “Endgame” movie, I decided to create a fun photo of possibly one of the coolest bad guys in a movie series to date… Thanos aka Funko Pop 289 from the infinity war series.

I wanted to create this image using a simple LED torch in the hopes to inspire others to be creative with whatever they have laying around and hopefully try new things.

The technique I used to create this image is called light painting which can be done a few different ways.

One way to light paint is to go to a dark location or room, set a long shutter over many seconds or even minutes and use light to paint what you want into the image, this way is fun and gives instant results but can be tricky if you are wanting specific results. 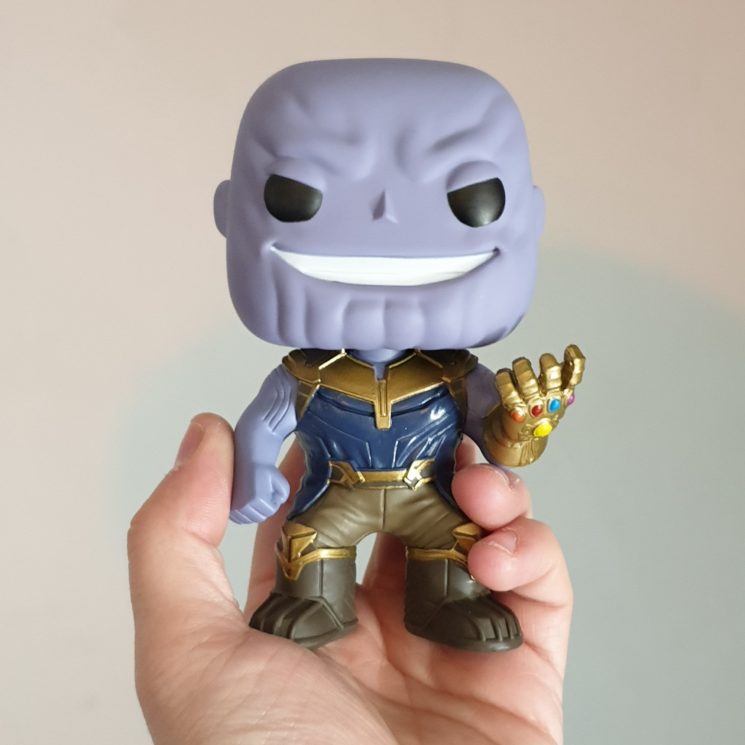 Another way would be to paint specific parts of an image in each frame and blend them in post. I like this approach as it gives more control later, allowing you to blend the frames that work, change the brightness and even colour of the light and this is the approach I used for this image. 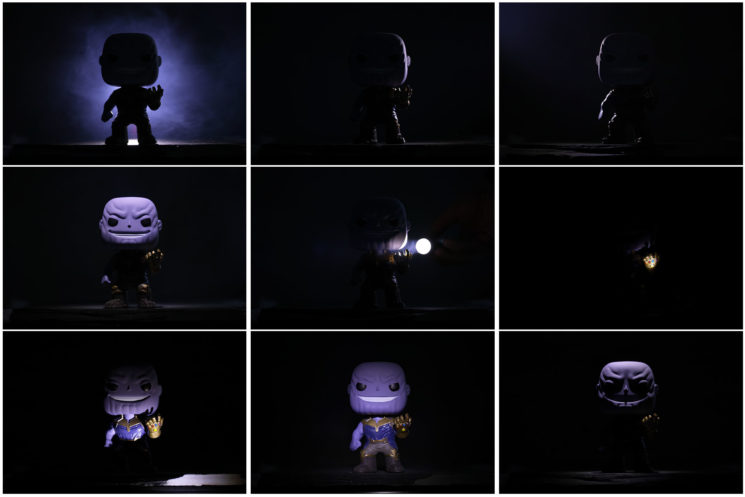 So what is needed?

A camera – I used my Sigma sd Quattro H here with Sigma 70mm f2.8 Macro Art lens. Really any camera will do. You could even use a phone if it has manual controls and a timer option. 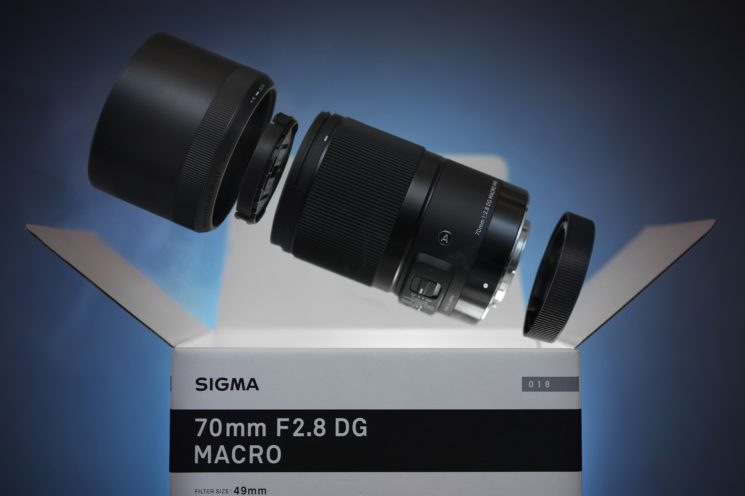 A tripod – essential really as any movement during the long exposures or between frames will ruin the shot, I used a Benro GoClassic with B2 ball head but any tripod and head should do. 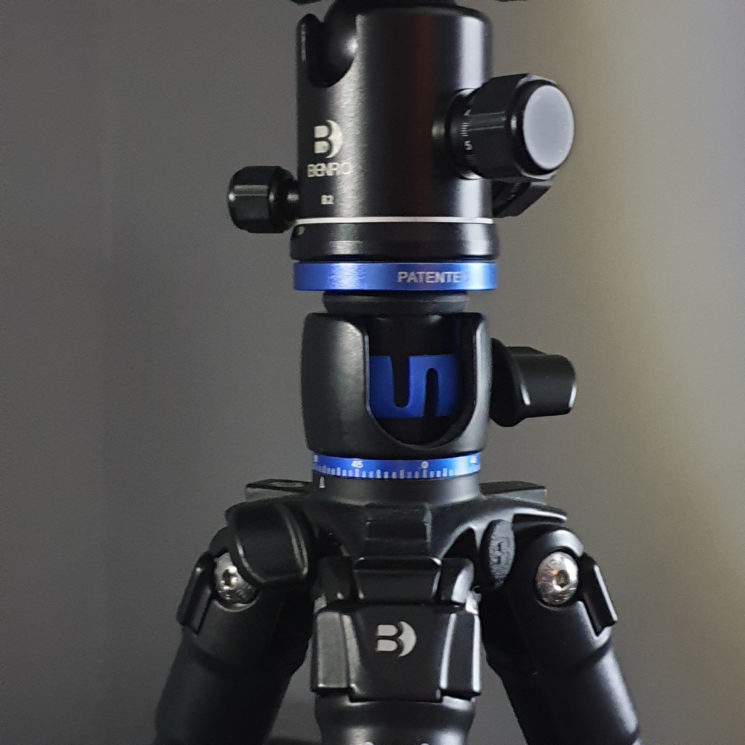 A remote trigger – not essential, but can help a lot as you don’t have to touch the camera between frames which can cause very small movements between images. 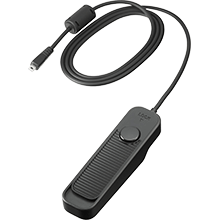 A light – I used a small LED torch my father gave me, it takes 1 AA battery and isn’t that bright (not an issue) and has a lens that can be moved to focus the light which is very handy for this type of Photography. 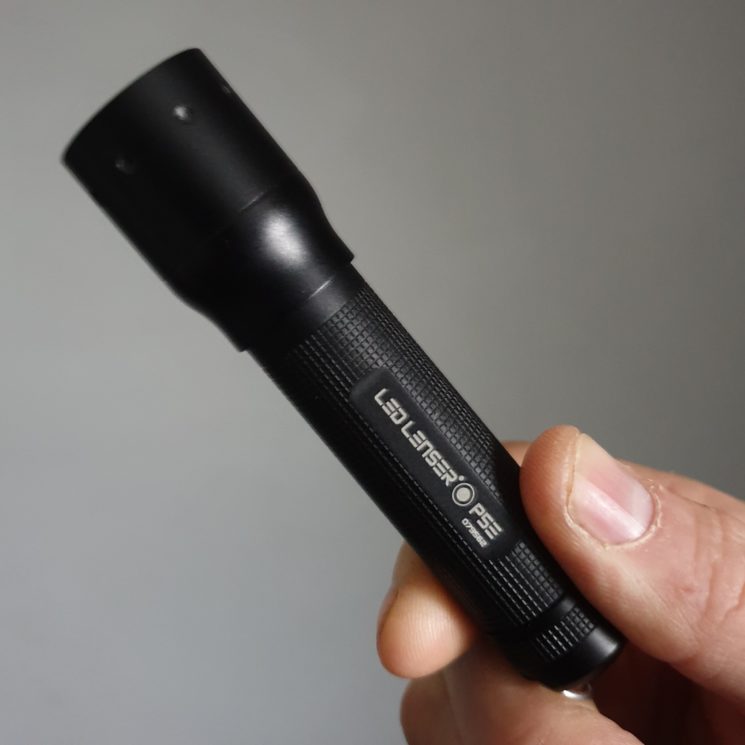 Vape/Smoke – something to add atmosphere into the image, even if I’m not using it for a direct effect like the background in this image it can be used to soften the light and change how a scene looks in general. 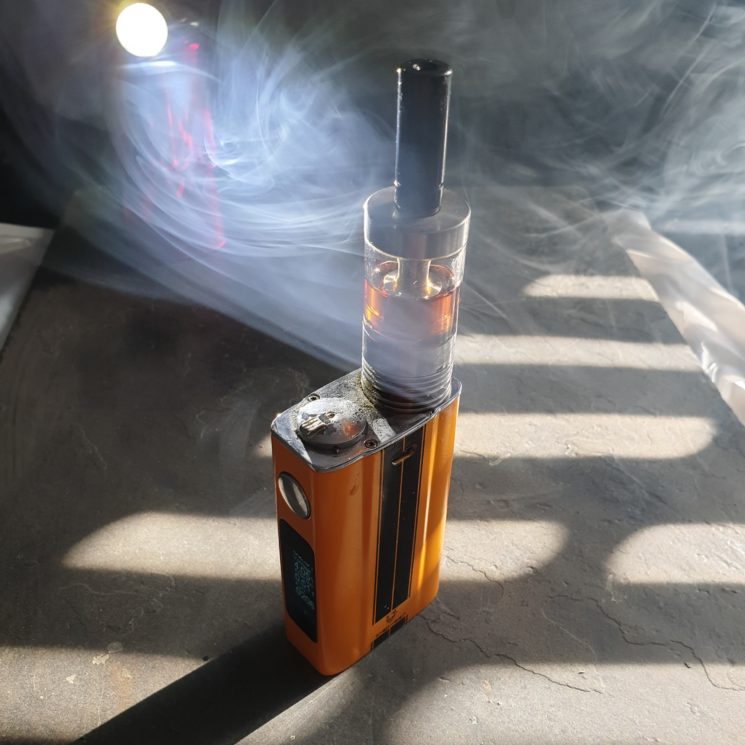 Now that we have the equipment we need to create the shot it’s time to set up the scene, for this I grabbed an old floor tile that I got from a hardware store. I often look out for old tiles and wood for sale or even bits of old pallets as they can make interesting backgrounds or props for images. 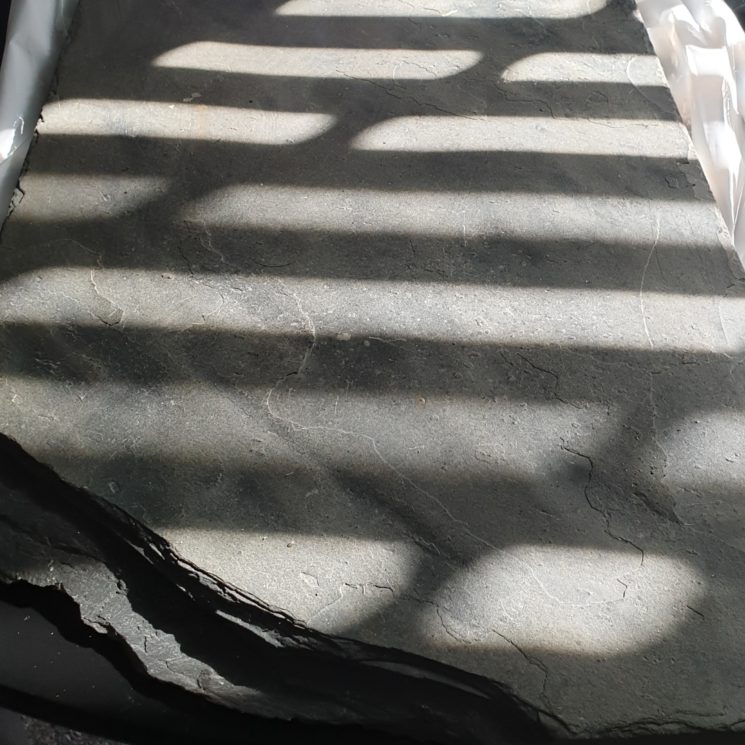 Part of the tile was damaged at the front. I wanted to use this damage so I placed Thanos close to the edge, with the right framing it makes it look more like the edge of a cliff or something instead of a continuation of the ground.

Once I got my position of Thanos and camera locked down it was time to go about creating the rest of the scene. The first thing I wanted to do was create the background, which was inspired by the use of the Space stone in Infinity war. 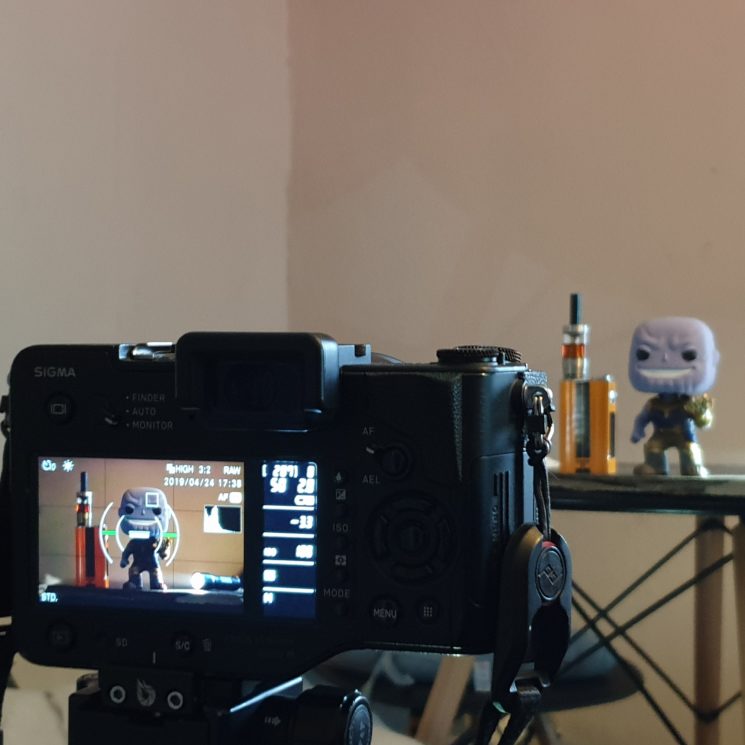 To do this I placed the torch directly behind Thanos whilst blowing some vapour behind him as you can see here. 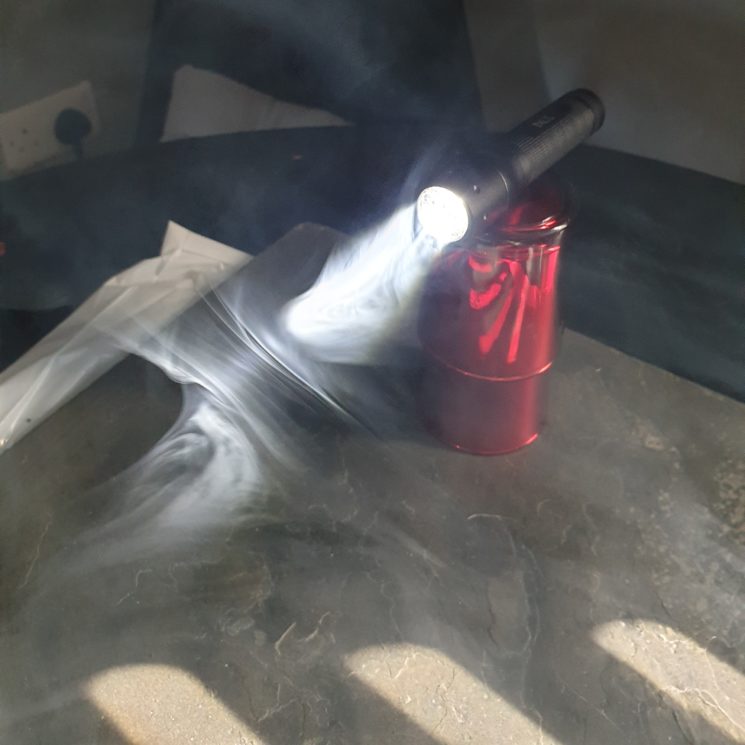 And this is the result after a few attempts. 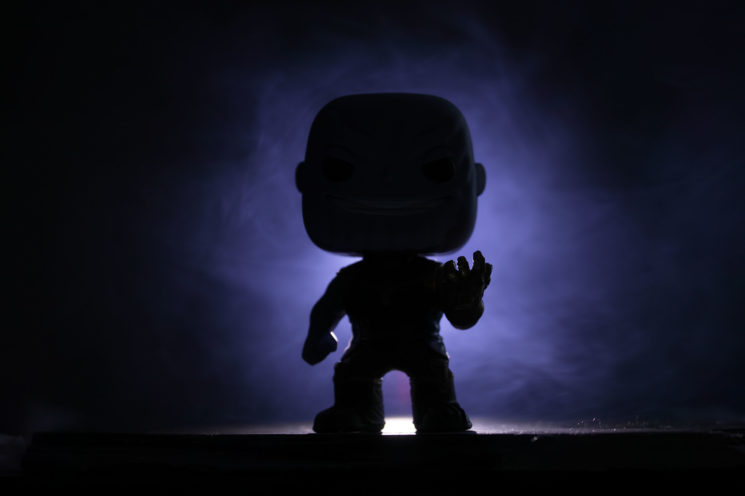 ext up was to light Thanos himself. For this, I held the light directly above him at the front. 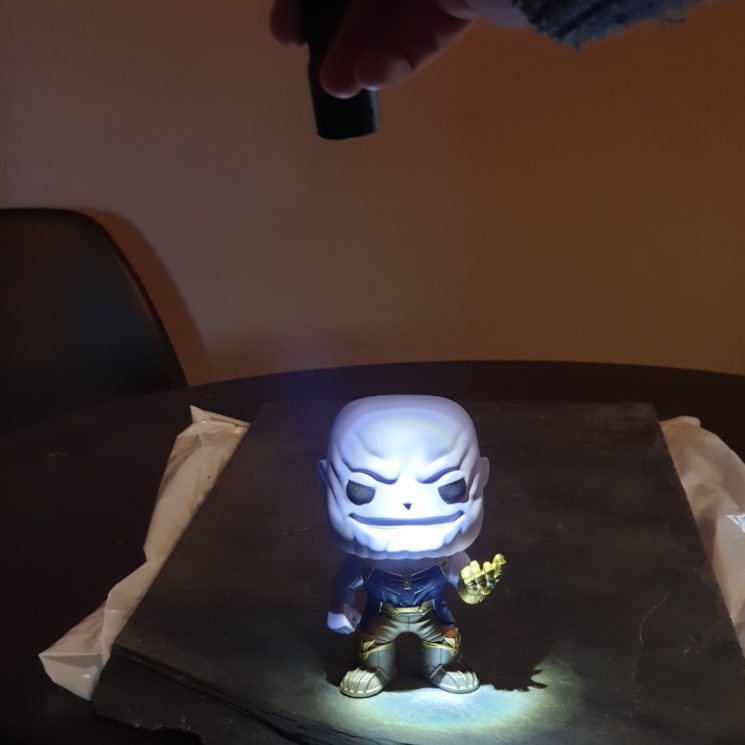 I adjusted the focus of the light to what I needed and got this. 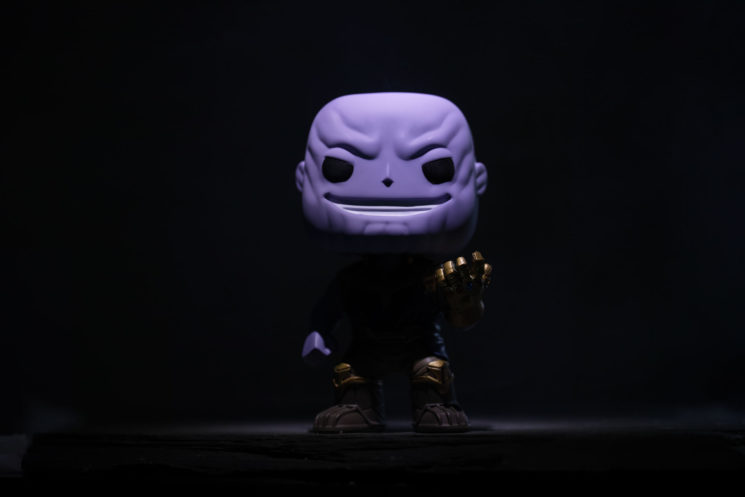 I then set about shining the light on other parts. I wanted a bright glove to use a layer mask just for the infinity stones, some side light and a little light on the eyes. After taking the images I wanted it was time to load them into Photoshop. (although there are other applications you could use)

You will want to load the images as layers and then one by one go through each layer. Using layer masks draw in the part of each layer you want to show as you can see in this quick animation.

Once I’m happy with how the layers are blended, I then go about cleaning up some parts of the image. I also tweaked a few other things like brightness, contrast and saturation.

This is now the completed image! 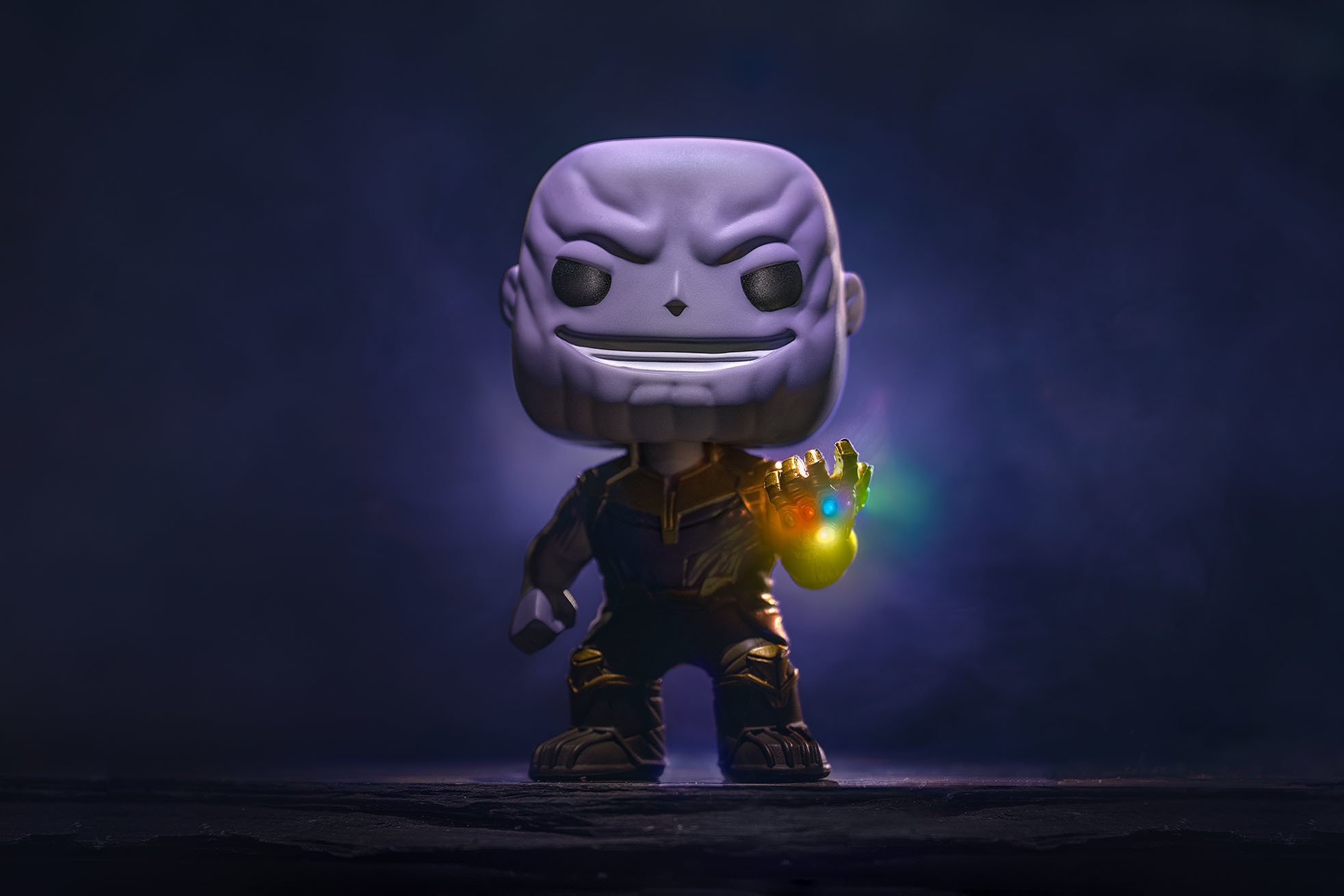 I hope you all enjoyed this little behind the scenes article.

Use food and household objects to make amazing miniature worlds
« Facebook sues a company that made almost $9.5 million from fake Instagram likes and followers
The “Tank Man” photo from Leica’s controversial ad was actually taken with a Nikon »