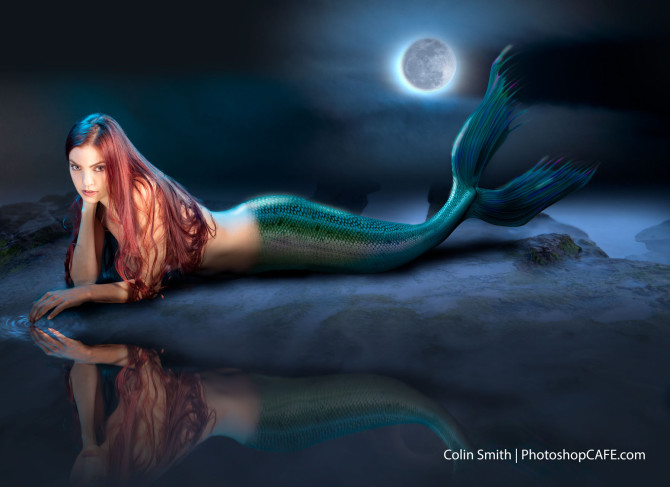 Using the image above, which was inspired by Disney’s Little Mermaid, I’ll walk you through how to employ an artform called Computer Generated (CG Photography) to create a powerful, surreal image. For the record, I have no purism in my personal style of art. I’ll use whatever I can to create the look that I’m after. I love to blend photography, illustration and 3D together to create something that doesn’t exist in the real world. It’s also worth mentioning that this image spent about a year as a showpiece on the homepage of Photoshop.com and Adobe used it in their keynote presentation when they announced Photoshop CS6.

This piece was a personal project. I enjoy personal projects because there is no rush or pressure. You can take your time. This is opposed to a commercial project where time and budget are critical, and you had better nail it the first time if you want to keep working with that client or agency.

I already had the final image in my head and was planning the shoot for some time. Often when I have an image like this in mind, I’ll carry the idea in my head for as long as it takes, until I crystallize the concept and find the right props and model. Currently I have a dozen ideas in my head, and I’m just patiently waiting for all the parts to align. When doing a personal project, I don’t force things, I just let them fall into place. When I met Whitney (the model) I knew that her long red hair and slender figure would make her perfect for the part of Ariel.

The first step was to photograph the model to use as Ariel. I posed her on a plastic trunk with a black cloth draped over it. My goal was to elevate the model so that I could get the right angle for the shot, but more importantly, so that I could get some light under her. I set up a black 9 foot seamless sweep for behind to cut down on unwanted bounce light. I also did the shoot at night so that I didn’t have to cover up the windows in the studio.

For lighting I used Kinoflo video lights. I love using these lights for photography because they are a very large and soft light source. I use Diva 400s which are 4 banks of dimmable double tubes. These lights are able to cover a large area with even, soft light. I also like video lights because they seem to produce a beautiful quality to the skin that seems to get a little lost with strobes. It’s also easy to sculpt with constant light because what you see is essentially what you get. In a situation like this where there isn’t any movement from the model, I don’t need the faster shutter speed that you get from strobes.

I gelled the 2 back lights with midnight blue colored gels. This simulated the moonlight and created a nice blue rim light around the model. For backlights, I used One Kinoflo and one generic fluorescent dish.

I then placed one Kinoflow in front to illuminate the model’s face, body and hair. I used a silver reflector to fill in the hair and body (I chose silver over white because I needed the extra punch because of the lower power of constant light. The original goal was to have the mermaid looking into the water and projecting caustics (reflected water ripples) onto her. When I started making the caustics, they looked weird without the movement, so I decided not use them. I also felt that the lower angle of the lighting just looked too monster light for the mood I was looking for. So I broke the rules of realism and went for a more beauty lighting to make the model look attractive rather than sinister.

In this first test image, you can see some of the light’s position. 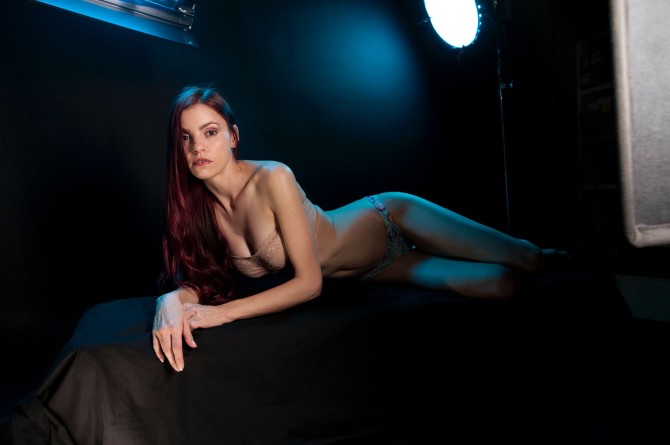 After sorting through the images, I decided to use this particular image even though the front arm is over lit and blown out. It’s easy enough fix this later on, although I normally would try to get it right in camera or selected another image, but I liked the pose and expression best on this. (3)

The next step is to create the tail. The first thing I did was to extend the canvas in Photoshop to make room for the tail.

I used a 3D program called Maya (Popularly Used for visual effects on films). I started with a tube and roughly modeled the tail shape by pushing and pulling polygons. I then imported the tail in Photoshop, using the 3D features in Photoshop. I was able to experiment with sizing and positioning. 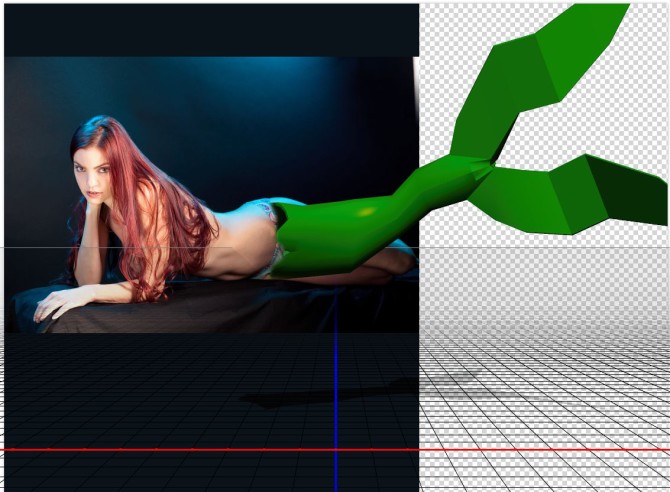 When I was happy with the positioning, I returned to Maya to make adjustments to the shape. When I got a pretty good fit in Photoshop, I refined the model in Maya, including subdividing and using a deformer lattice to bend the shape.

The same thing can be done on simpler 3D apps such as Cinema 4D, Rhino etc. You can also find plenty of pre-made 3D objects online if you can’t make them yourself. In this case, I needed something very custom, so making it myself was the best option. 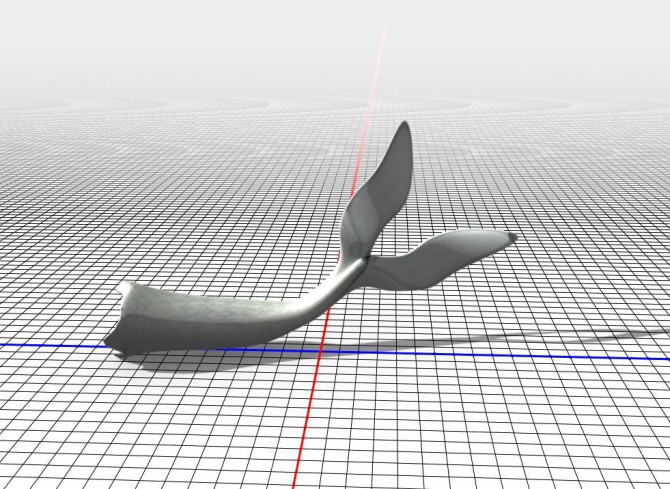 Now it’s time to create the background plate. I imported the two images that I shot at Laguna beach to create a surface to place the mermaid. I merged the 2 photos together using layer masks and other techniques that I’ll be showing in my class on compositing for Photoshop week. I also dropped in the basic moon image. 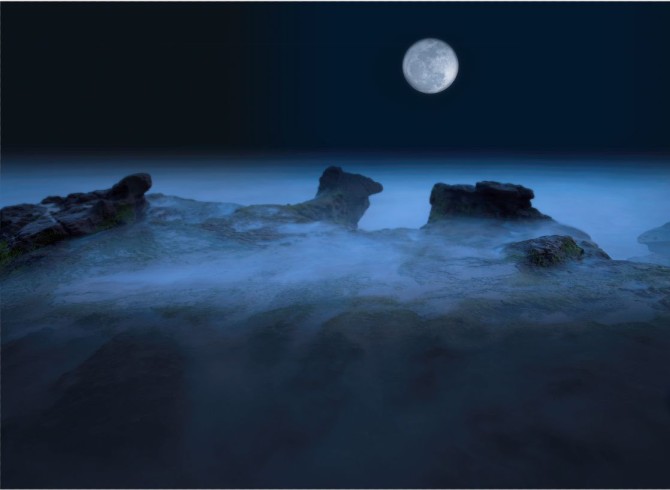 Now I bring in the model and extract the edges to begin to blend her into the scene. Standard retouching is also performed here on the face and body. Because Whitney has really good skin and it’s her natural hair rather than a wig, not much retouching was required. 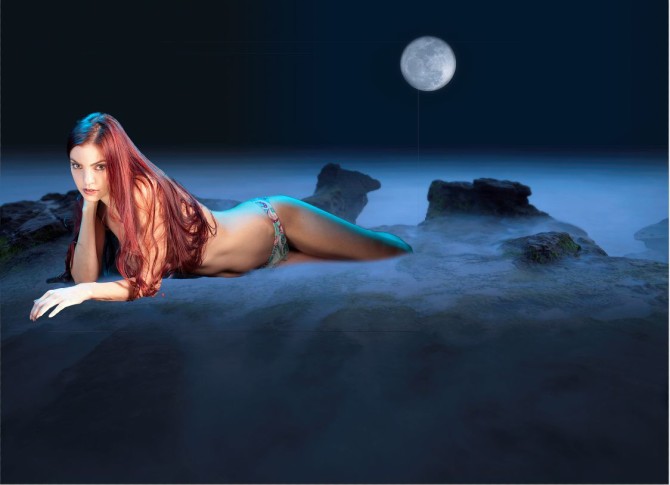 At this point, I dropped in the tail. It was exported from Maya as an .obj. I then imported it to Photoshop and wrapped the scaly texture around it and positioned it using Photoshop’s 3D texture tools. I also used Photoshop’s 3D lighting tools to match the position and intensity of the lighting. 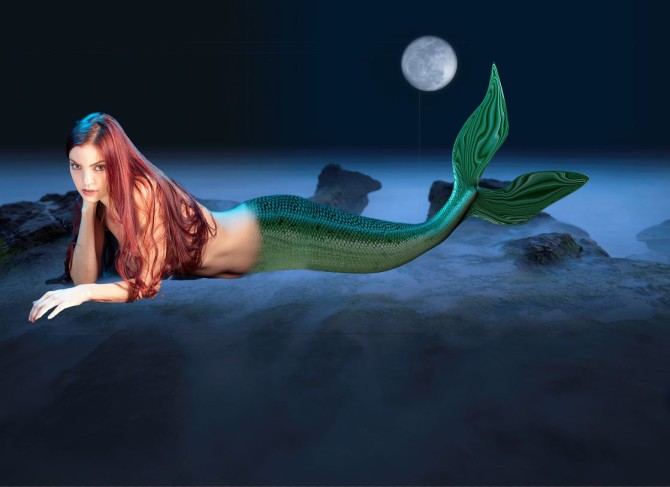 I decided to use the liquify tool for the fins rather than modeling them and texturing, which would have been a lot more time intensive. (Note: next time, I would use z-brush for the tail fins). I’ll be touching on some 3D texturing in my Photoshop CC new features class for Photoshop Week. 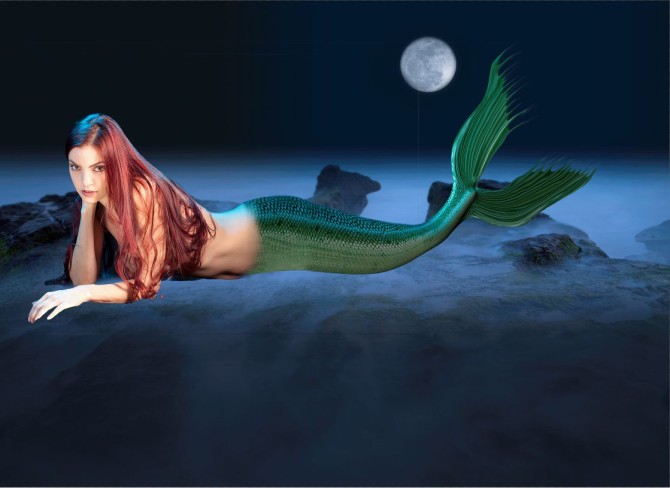 At this point it still looks very fake and composited. This is where painting in carefully placed shadows brings a base to the model and adds the realism need to make the composite believable. I also darkened the blown out hand in the front with an adjustment layer and a mask. (10) 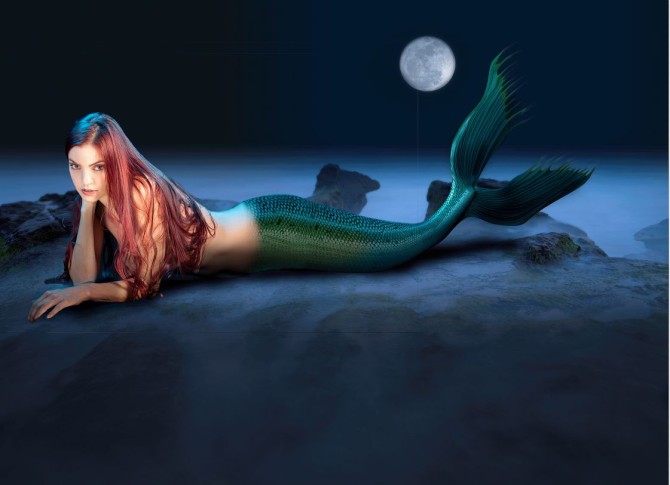 I added the reflection and blended it using a layer mask. 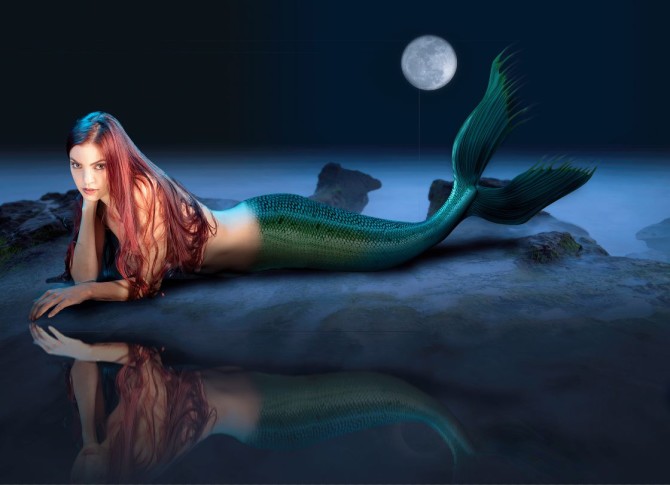 At this time, I added the second image that I shot of the cloudy night sky around the moon. Both moon shots were captured at the same time. I braked the exposure to capture the moon and another for the cloudy sky. There were about 10 stops difference between the two shots. I choose to composite rather than use HDR for my purposes here. 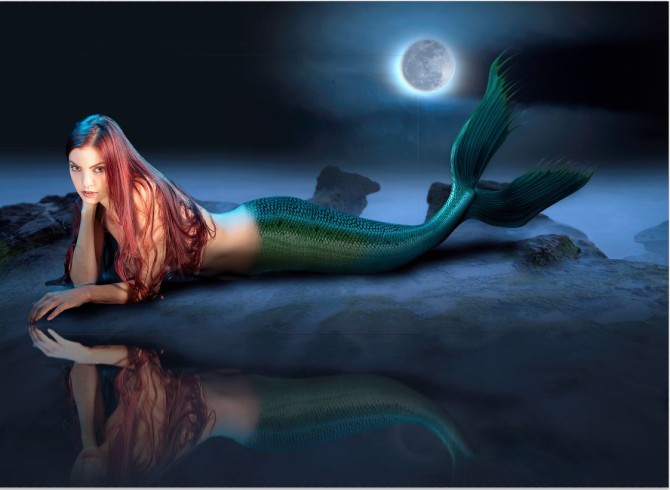 This is where I added the water ripple, to add a nice fine detail. I did this using filters and masks in Photoshop. 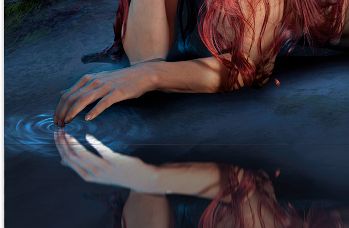 In this step, I added some color to the tail fins. It might detract from realism, but I wanted a bit more of a fantasy feel. 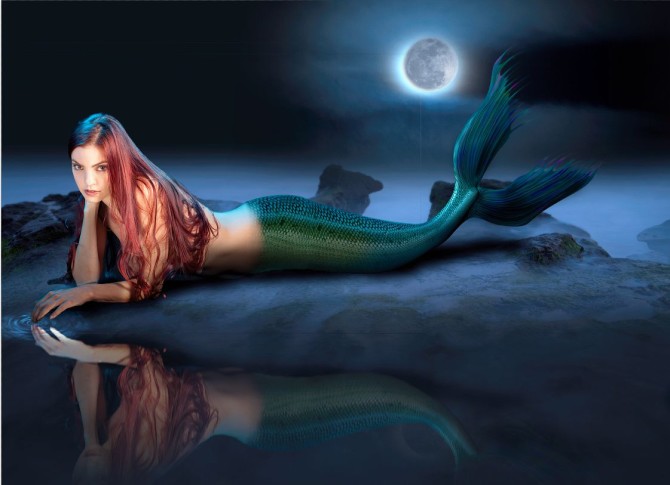 I created some reflective highlights on the tail. These were toned down a bit later on. 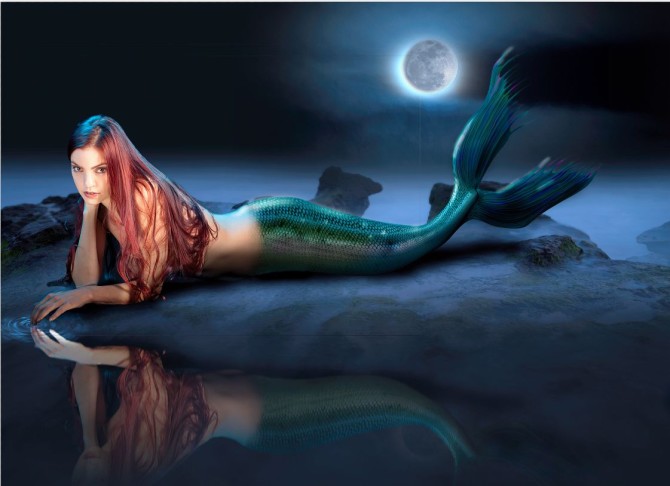 Here you can see the Layers panel and see how the image was constructed.

Finally, I darkened the reflected hand in the water to match the one on the mermaid. I also tamed the tail a little and did finishing touches here.

If this inspires you, check out more of my tutorials on www.PhotoshopCAFE.com, where I break down individual techniques and don’t miss Photoshop Week 2014!

This is a special guest post by creativeLIVE Photoshop Week 2014 instructor and founder of PhotoshopCAFE.com Colin Smith.

Colin Smith is a best-selling author, trainer, and award-winning digital artist who has caused a stir in the community with his stunning Photoshop work. Colin is also known as a pioneer of HDR photography and is the founder of one the world’s most popular Photoshop resource sites – PhotoshopCAFE.com.

Broadcast over five days on two channels, creativeLIVE Photoshop Week 2014 features 40 classes on everything from simple shortcuts to advanced skills — like photo restoration and making your own presets. Twelve of the world’s leading Photoshop masters will show you how and when to use every tool and arm you with specific post-production strategies for every kind of photography. So get excited and mark those calendars for February 24-28, 2014!

The composite genius of Colin Anderson

Photographer turns 10,000 plastic bottles into an ocean for this mermaid shoot