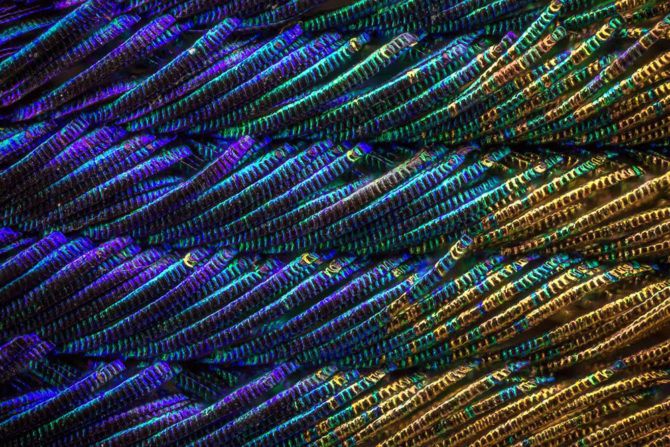 Iridescence is defined as the phenomenon of certain surfaces that appear to change colour as the angle of view or the angle of illumination changes, and that is highlighted especially well in these extreme close up images of these peacock feathers created by Canadian photographer Waldo Nell.

Image stacking shots focused at different distances from a subject is a process I haven’t had much need to use myself, but it’s a technique I’ve always been fascinated by, so DIYP had a chat with Waldo to find out more about him and his process. 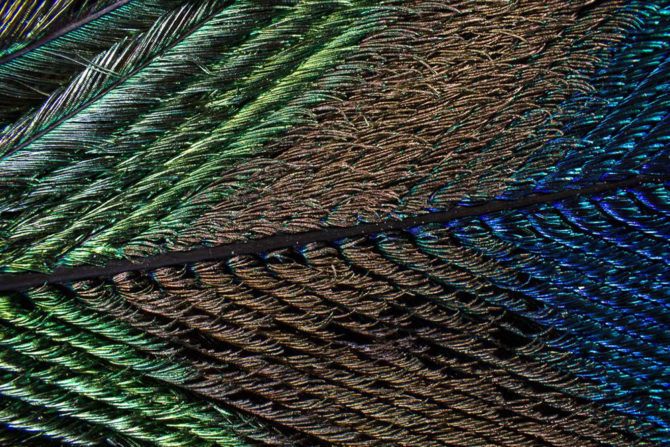 Feeling stifled by the costs of developing film, Waldo didn’t really start to push his passion for photography until he made the switch to digital.

I used to own an old Vivitar 35mm film camera when I was very young, and loved playing with it – but the cost of developing the film restricted my creativity.  In 2000 I got my first 2.1MP Fujifilm digital camera, which opened the doors for me, however it was not until I acquired my first DSLR (Canon 1D Mark II) back in 2004 that my photography took off.

With that camera system I was free to explore everything around me due to the great opportunities made possible by having interchangeable lenses at your disposal.  This allowed me to take photos from the tiniest bacterium to Venus in transit across the sun, and everything in between. 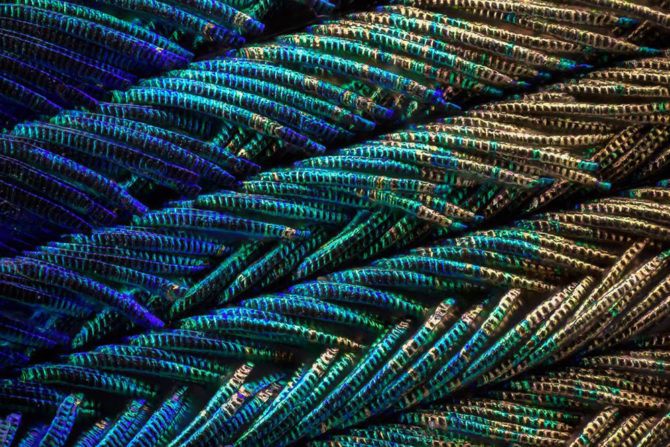 The developments in digital cameras over the last couple of decades have certainly made life a lot easier for photographers, affording much more freedom to experiment, and giving us a lot of options we didn’t previously have.

Waldo’s latest project involves peacock feathers, but what inspired him to tackle such a unique subject?

I would say there were two motivations.  One is the technical challenge – the barbules are highly reflective due to the iridescence, so getting lighting just right is very hard.  I wanted to see if I can showcase the iridescence without being overwhelmed by specular highlights in the photo.

The second motivation was to get closer to a subject I have photographed before but at much lower magnification, to try and resolve the source of the iridescence.

Clearly, without an electron microscope that is not going to happen (the diffraction limit of visible light limits the resolution to about 300nm, too coarse to resolve the structures causing the iridescence).  However I did manage to showcase that DNA can be so intricate it can instruct RNA to create individual segments on the barbules with different thickness layers resulting in unique colours per segment. 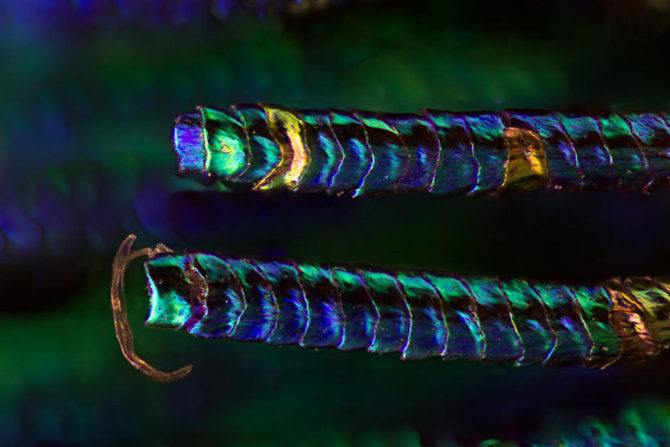 We were curious what initially drew Waldo to peacock feathers over the many other colour birds that are out there.

The iridescence in their feathers and their unique segmented structure is just very different from most other feathers I have photographed before.  It helped that I saw the potential beauty peacock feathers hold as taken by an acquaintance.

Obviously, working on such high magnifications with such an unusual subject required some slightly different hardware to that which many of us use, and while the microscope used certainly isn’t inexpensive, the camera was quite an understated model by today’s standards.

I use an Olympus BX53 microscope with a Canon EOS 600D/T3i mounted on the microscope’s trinocular tube.  This was tethered to a PC running remote capturing software. 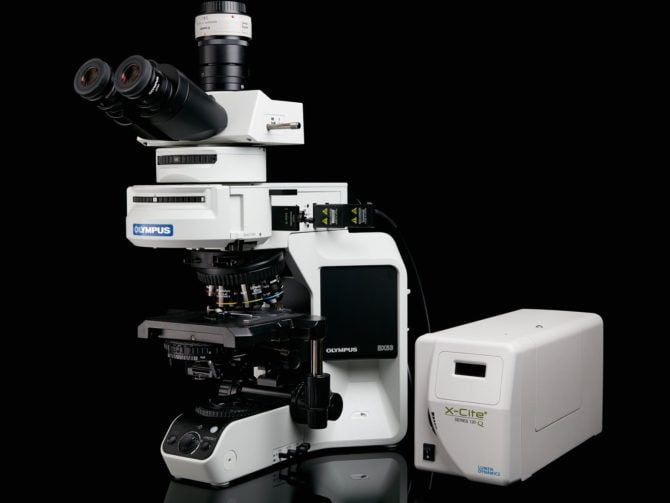 The Olympus BX53 is the microscope Waldo uses to make most of his photomicrographs.

I started by preparing the sample – I cut off a piece of feather to make the sample more manageable.  Once placed on a slide on the stage, I used two different techniques for illumination.

The first technique used for some of the photos, especially some of the high magnification photos, was to utilize the X-Cite 120 light source that streams light down the objective, using it as a condenser.  At this high magnification the working distance is very small so it is hard to illuminate the feathers from the side using conventional lighting. 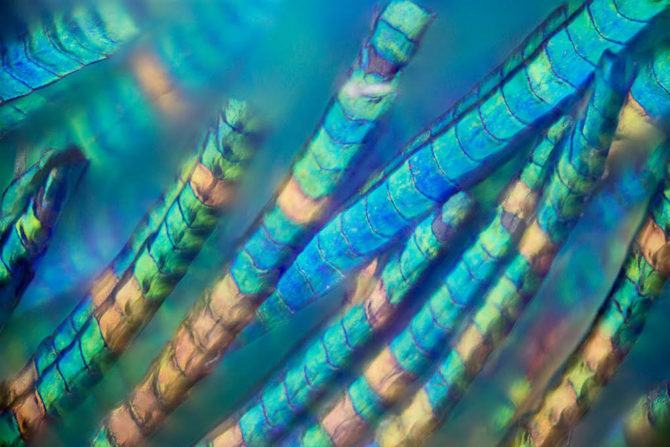 The second illumination technique I used for the rest of the photos is a Schott KL2500 LED light unit with three light guides.  These guides can be bent, thus be positioned anywhere I like.  By playing around with the angles I found some pleasing positions.

The light from this source is too harsh though, so I used some diffusing material between the light source and the feather to soften the light. 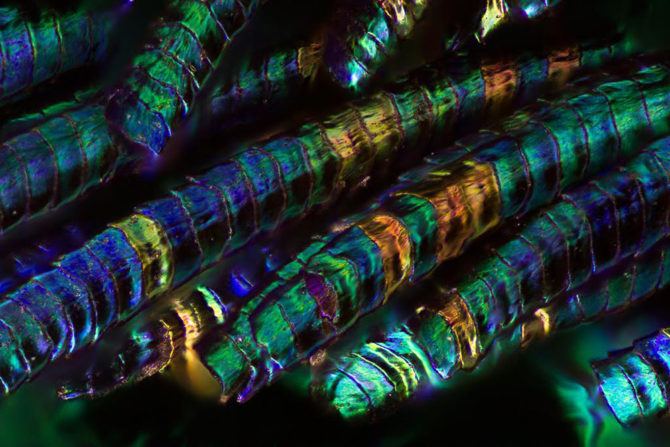 Even for regular macro, working in such a tiny space can make lighting extremely difficult, and once you start adding reflective and refractive surfaces into the mix it can become virtually impossible to predict.

When put into the tiny confines of a microscope it gets even more difficult, and extremely tiny lighting adjustments can have a big effect on the images.  Waldo told DIYP about how he dealt with some of those challenges.

Experience helps a lot.  If the lighting is not right the stacking will never work as it tends to exaggerate the harshness of the light.  But if the light is too diffused then the feather loses some of its brilliance.

Mostly I move the lights around until I find something pleasing. 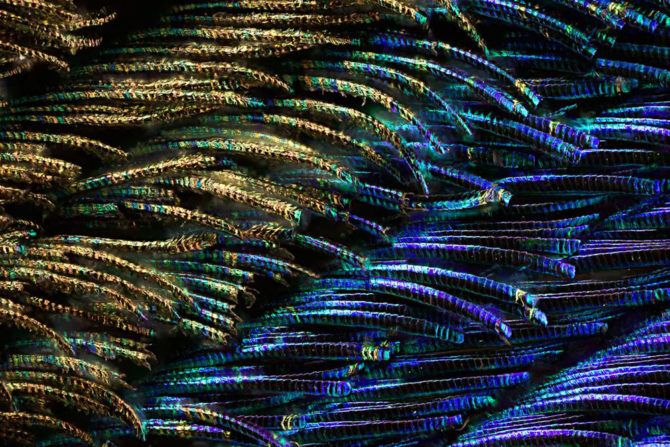 So, as is often the case with photographing unique subjects, there’s no magic formula, no big secrets, it’s just a case of figuring things out as you go.  The discovery process becomes more about learning what to not do, rather than trying to figure out what always works.  That way you can keep pushing yourself and experimenting.

Waldo’s other major challenge was the super shallow depth of field with which he had to work.  If you thought your macro lenses were shallow, you’ve seen nothing yet. 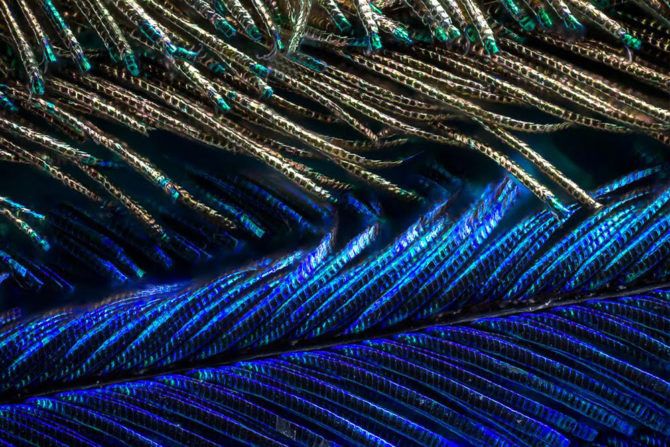 To give you an idea of just how shallow this is, the width of human hair varies beween 17-180µm.

To attach a camera to a microscope depends heavily on the specific camera and microscope model.  A microscope is not really a single unit, it is more like an assembly of components.  It is very modular.  Mine has a trinocular tube meaning apart from the two eye pieces, I also have a third, upright tube that allows me to attach the camera via several adapters.  It is not unlike mounting a camera to a telescope.

To work around the depth of field issue I use a technique called image stacking. Once the lighting was set up, I started taking tens to hundreds of photos per image, each time manually adjusting the focal plane (stage height) of the microscope. For instance, some of the images consist of 249 individual photos, others 38 photos stacked together using specialized software to extend depth of field using multiple photos at different focal planes. 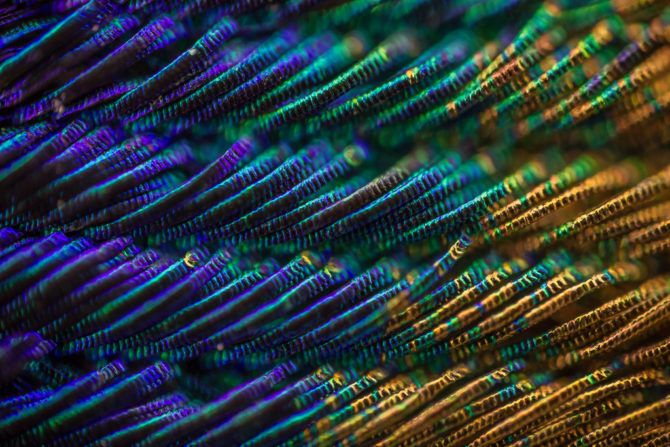 Stacking is not trivial though. It is not like sending 249 photos in and out pops a perfect image.  Due to optical magnification and other effects, the stacking creates artifacts that have to be painstakingly eliminated by hand.  Each image can easily consume several hours of this manual touch up.

Moving the entire height of the subject through the plane of focus required anywhere from 38 to as many as 249 individual photographs to produce each final image.  Waldo told us about more about his stacking process, and how he dealt with them once they were on the computer.

For each image I would take n amount of photos, each at a slightly different focal point.  Once all the photos were taken, I imported them into LightRoom.  From there I exported the files as 16-bit TIFF images to a stacking program called Helicon Focus.  All the photos were imported, then ran through a stacking algorithm. 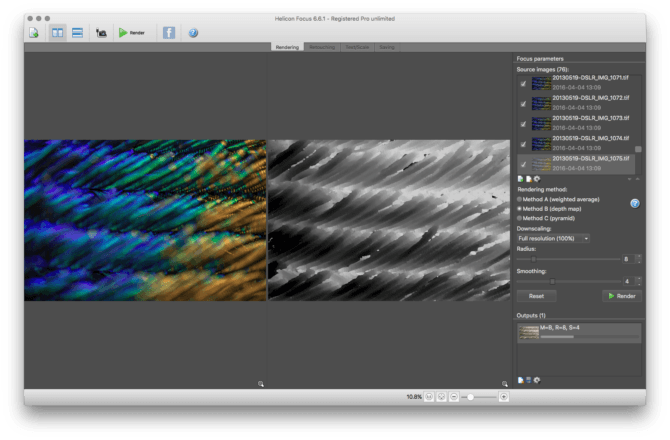 There are three major algorithms and I had to use experience and experimentation to find the best one for each image.  Not all photos were stacked the same.  Once I found the right combination of stacking algorithm and settings for each algorithm, I would perform final touchups (such as manually merging some layers where the computer got it wrong). 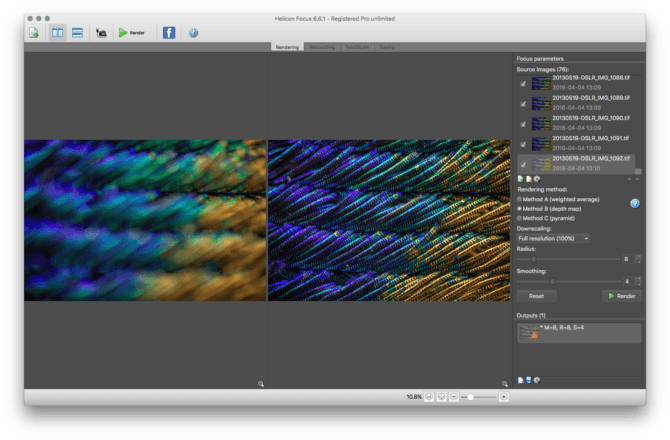 Once done I would export the image to Photoshop and perform final colour and contrast adjustments. Lastly the images were imported back in to Lightroom.

Some images were much harder to stack and required a blending between different stacking algorithms. In those cases I would create multiple stack outputs with different algorithms, then blend them together to create a more correct image.

The final images seem well worth the effort that goes into creating them, and it’s certainly not something one sees every day.  Waldo is certainly happy with his results, although he told DIYP that the project is far from over.

I do believe I achieved one of my goals – to photograph the iridescence of the feather.  I could not resolve enough detail to reveal the diffraction causing layers though due to resolution limits.

I have already taken new peacock feather photos which I am happy with.  I have already begun photographing other birds too – however getting pristine feathers is sometimes a bit challenging. 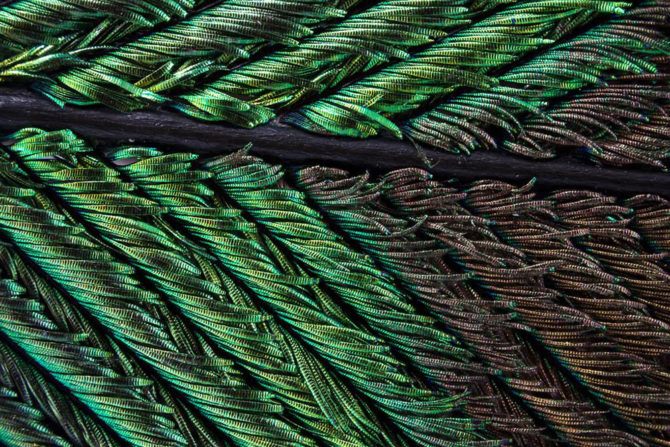 We asked Waldo if he had any tips or suggestions for somebody looking to get into photographing subjects through a microscope.

This is a hard question.  It is unlike asking what kind of camera you need to get, as I can recommend many cameras that will be great all rounders without breaking the bank.

Buying a microscope is buying into a system, so you need to make sure you pick a good brand.  One cannot easily go wrong with one of the “Big Four” – Olympus, Zeiss, Leica and Nikon.  Nikon has an E200 microscope that I used to use, affordable and very good for its price.  It cannot do advanced illumination techniques like DIC.

Chinese branded microscopes tend to be of lesser quality, though Motic makes some nice scopes.  Anything under $1000 is most probably crap.

So, this is an area into which one must not tread lightly, nor cheaply, but while we’re on the subject of macro lenses, Waldo also send along an image he created with the Canon 5D Mark III and Canon MP-E 65mm f/2.8 Macro lens attached, for the sake of comparison. 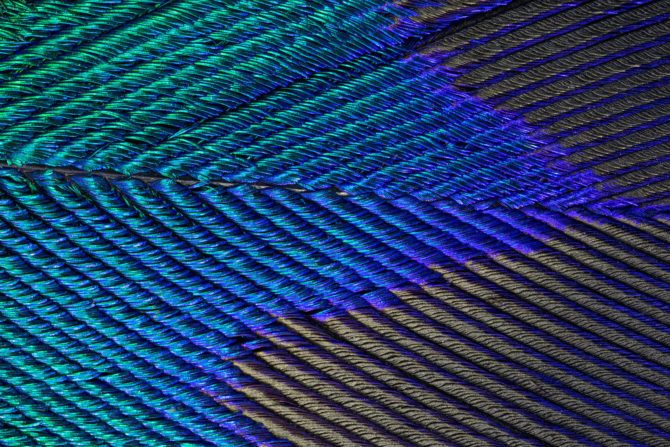 With a similar scene photographed through the microscope, the difference in scale and resolving power becomes immediately obvious. 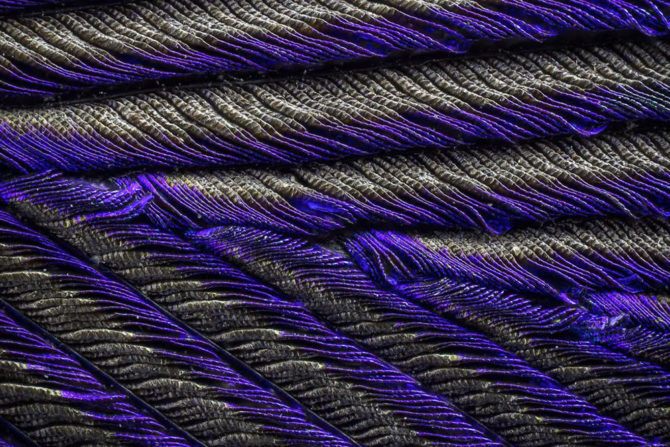 Photographing subjects down a microscope is something I’ve always wanted to try, but having now gained a little more insight into the process, I think I’ll leave it in the hands of capable experts like Waldo.

We would like to thank Waldo for sharing his time and his story with us.  Nature often presents us with amazing things, and we look forward to see what minuscule beauty Waldo can bring out of feathers from other bird species in the future.