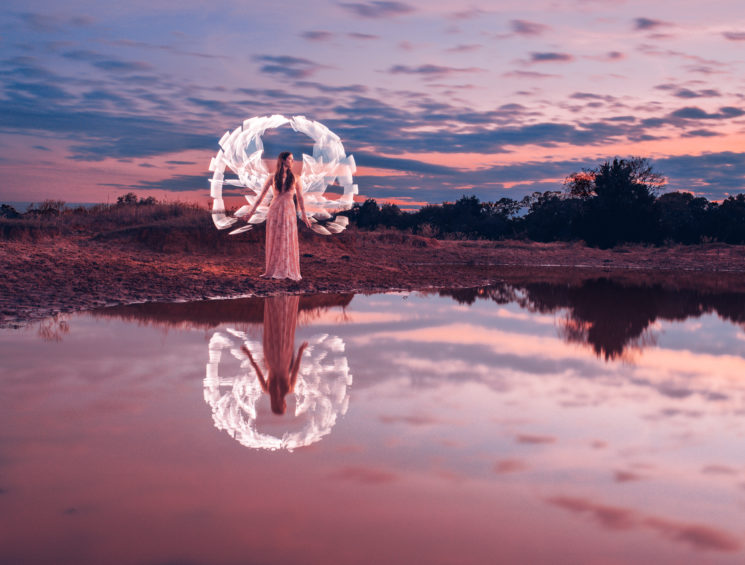 If you’re into light painting, chances are you’re following ‎Zach Smidt’s work. We’ve featured his photos before, and recently, one of his stunning shots especially caught my eye.

Surrounded by the serene pink sunset, with gorgeous clouds as a backdrop, Zach’s model Juli stands reflected in the mirror-like water. The white wings are light-painted behind her, giving the additional sense of serenity to the image. I loved everything about this photo and wanted to know more. And Zach was kind enough to share a detailed tutorial of his shot with DIYP.

Zach tells me this photo was created after a long day of cleaning out their old farmhouse. So first of all, I’m amazed by their enthusiasm to go out there and create photos after an exhausting day! The duo tries to create at least once a week, and it’s a challenge to cram in light painting sessions in between one of their three day jobs. He tells me shoots like this are a good bonding experience for him and Juli since light painting requires timing and coordination. And I find it beautiful that they create art together.

These days, they keep a long flowing pink dress that Juli picked up at the local thrift store in the trunk of Zach’s car. It’s just in case they drive past a spot that’d be a perfect backdrop. And in this case, the ideal place was just in front of the farmhouse.

It was a nearly windless day, and the small pond in front of the farmhouse made for a perfect mirror. Nature was super-kind that day, so it also gave them the beautifully textured clouds. The couple waited for the dusk, and then they dusted off Juli’s dress and got to work.

The weather was perfect; Zach, Juli, the dress and the gear were there – so it was time to make some art. Around the dusk, they set everything up and started shooting, and Zach shared the detailed description of the process:

“I placed my camera low down on the opposite bank from where Juli was standing, just a few inches off the ground to capture the rough texture of the banks of the pond along with the reflection. The tools we use are a simple and fun creation that we purchased from Light Painting Brushes.com, a simple acrylic feather shape along with a conical rubber connector that allows you to connect your flashlight to the acrylic shape. We use a very powerful 1200 lumen flashlight which enables us to shoot early in the blue hour, which makes for a well-illuminated landscape along with a good amount of ambient light on the model.” 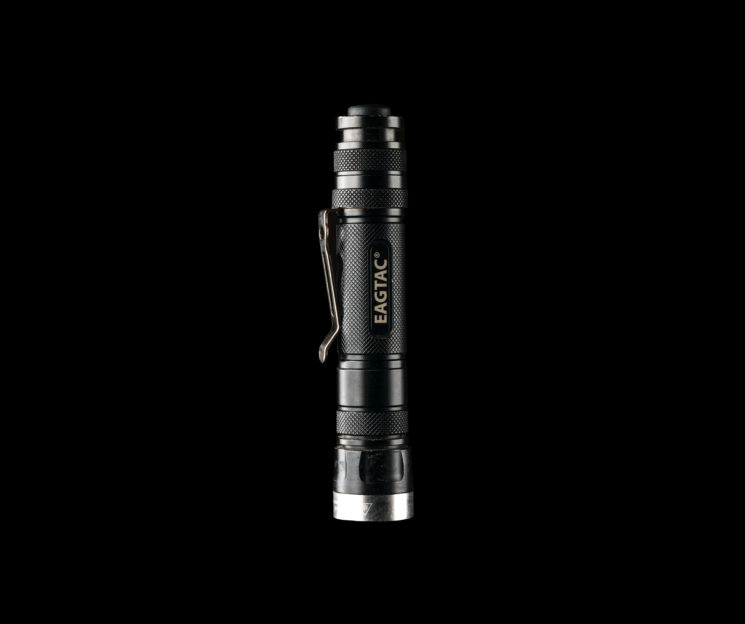 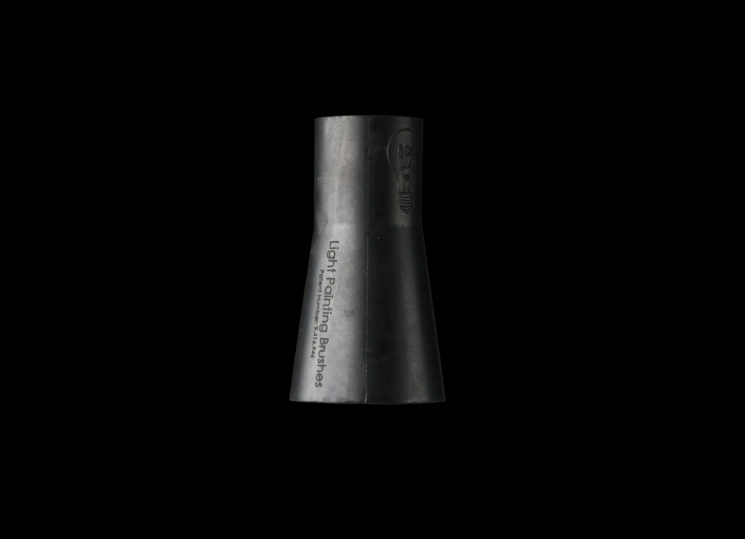 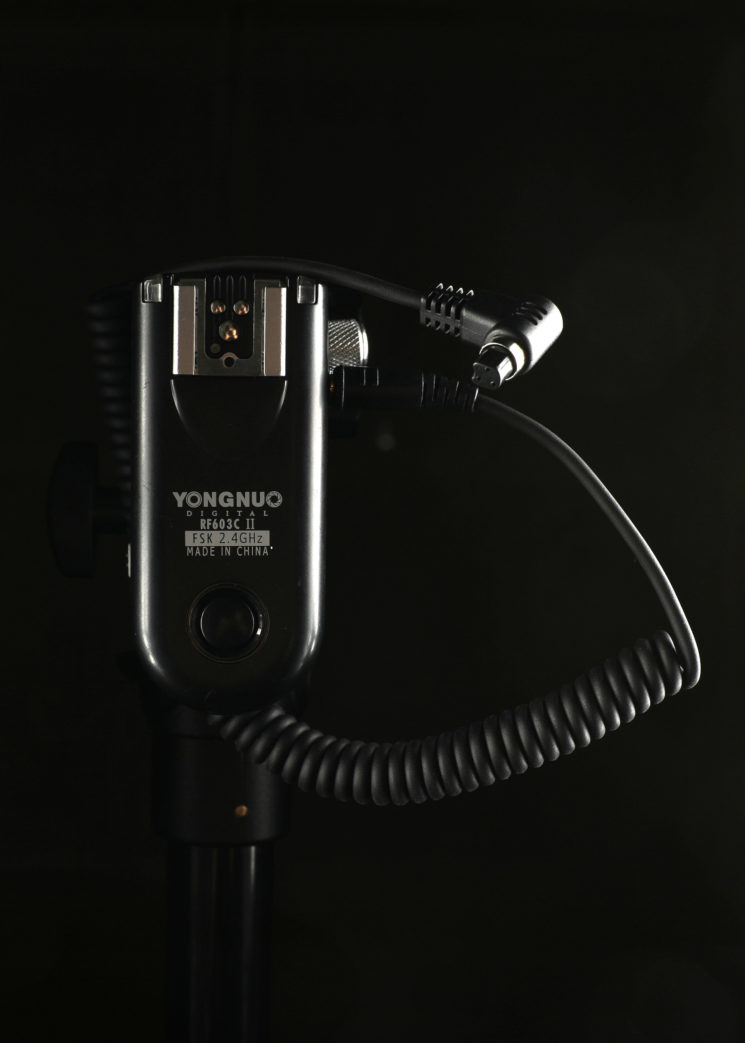 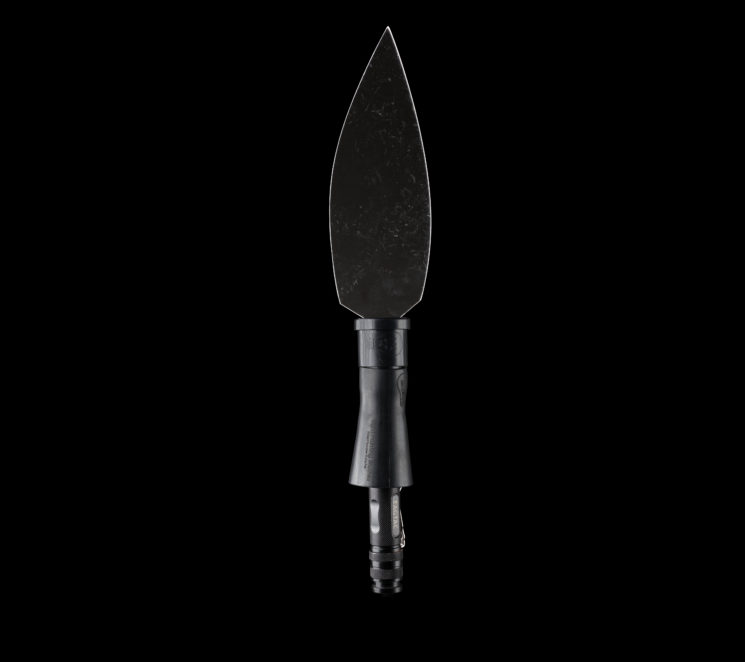 For this shot, the camera was set to Bulb mode, connected to a wireless remote which Juli was holding in her hand. Zach is usually the one who triggers the camera when light painting. But for this shot, he had to use two light painting brushes at once to draw the wings. So he dialed everything in, crouched behind Juli and gave her the signal to open the shutter.

“Once the shutter opens my first movement is a quick sweep with the brushes over Juli’s shoulder, pointing them at her body and face to ensure that the front of her is well lit. I then mentally choose a spot on her back to be the anchor point for the wings, generally between her shoulder blades. I then rapidly make sweeping movements outwards with both arms at once, making sure to sweep widely and then bring my arms up to a point, where I visualize the wingtip to be. Once I’m sure I’ve made enough movements to fill out the wing, I give Juli the signal to close the shutter.  All of this happens in just seven seconds!”

The process may sound difficult. But Zach says that all it takes is a little practice to get images like this. He says it’s even relatively simple, and it’s definitely fun even if you don’t nail it on the first attempt. Here is the final result of Zach and Juli’s photoshoot:

If you’d like to try something like this, Zach also shares a video of the process. It was filmed while he was creating another gorgeous photo with light-painted wings, but it contains an example of how he creates them. You can find the process in the last few moments of the video and get a good visualization of the movements he described above:

And here is another photo of Juli with wings of light: 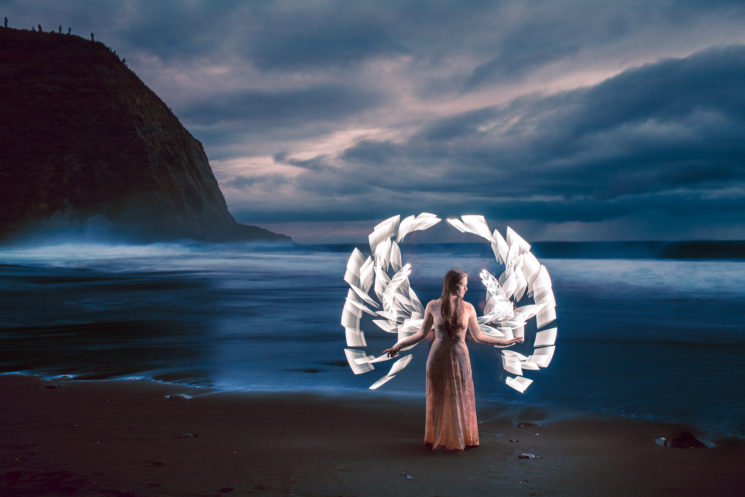 I find a lot of inspiration in Zach’s work. He is constantly pushing the boundaries and inspiring me and other artists to (re)discover our creativity. Therefore, I hope this image breakdown got you inspired, too.