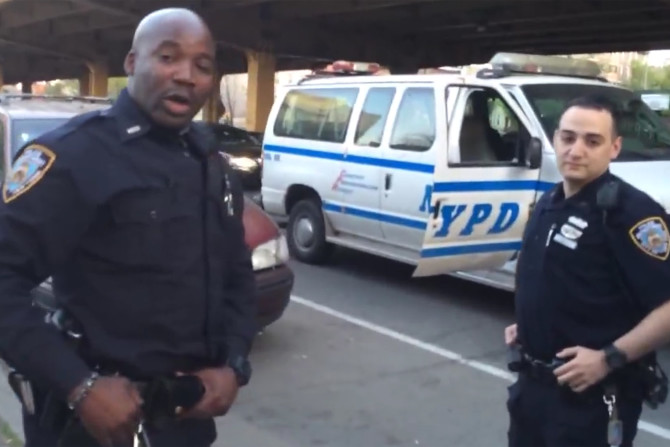 Recently it seems like every other day there’s a story in the headlines about police officers abusing their power and violating civil rights.

Shawn Randal Thomas, an event photographer from New York City, is the kind of person who fights for his rights and firmly believes in civilian oversight.

As such his YouTube channel hosts a variety of videos recording law enforcement officers during one activity or another, pointing fingers at those he thinks are bad apples.

This probably won’t come to you as a surprise, but spending so much time around cops and always against them won’t get you on their good list. In fact, Thomas has been arrested six times (as of May 2014); though no matter the charge he was never found guilty.

The video below, which has been viewed 380,000 times in just 4 days, shows Thomas putting his knowledge of the law, experience and what many think is a too-large serving of disrespect, to brush off a couple of NYPD officers who ask what he’s carrying in his bag.

While he succeeded to avoid answering the cops’ question and was left alone, one must wonder if his provocative behavior doesn’t attract police and give photographers a bad name.

The video contains profanity, so be NSFW-warned:

“Shawn, what you got in your bag,” an officer asks Thomas, who did not seem surprised by the question and had his strongly worded response prepared:

“None of your f***ing business, that’s what I have in the bag. Honor your oath, scumbag!”

As mentioned above, some people believe Thomas’ behavior is disrespectful, but he disagrees:

“I have never been rude, or ‘disrespectful’ to any police officer unless that police officer was actively engaged in acts of treason. In such cases, it is my patriotic duty to respond in such a manner”.

Do you think that’s an appropriate response or is Thomas pushing it?