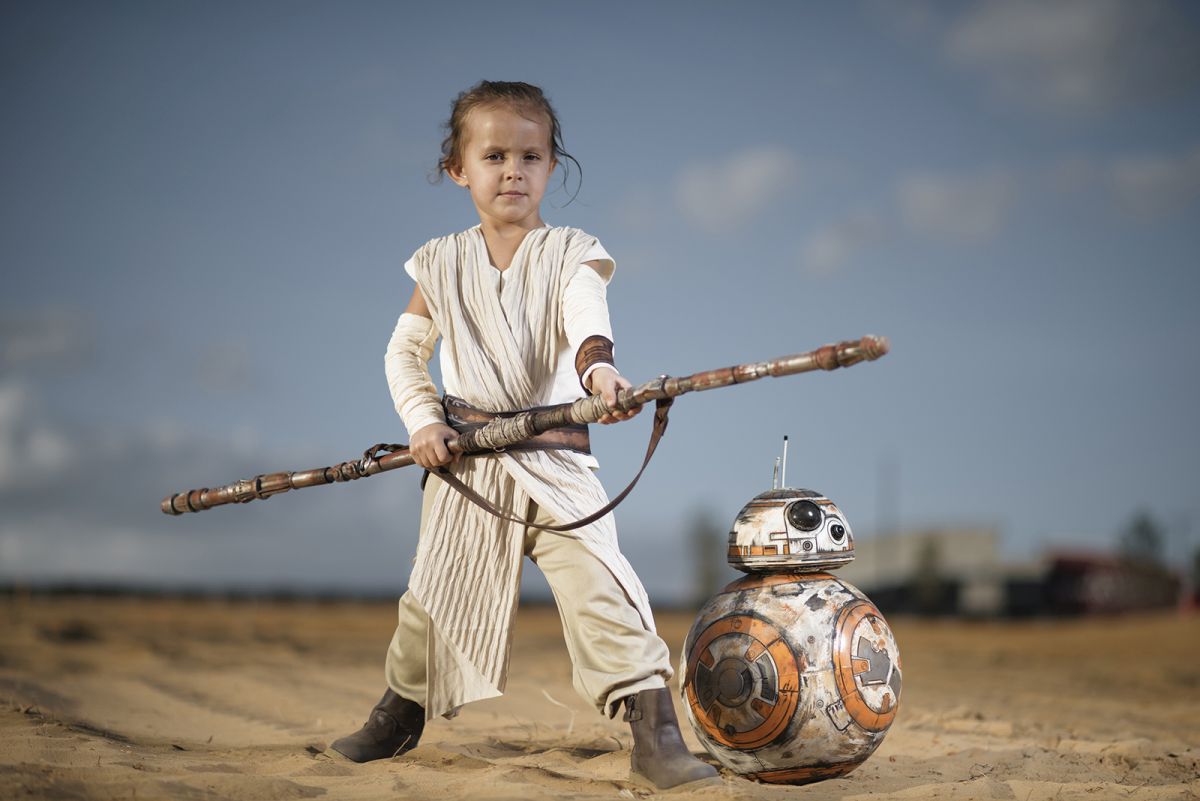 Photographer Rich Johnson is no stranger to Star Wars and space, a lot of his work revolves around space (and some not), but I think it’s safe to say that none of his previous works is as total and as encapsulation as his celebration or Rey portrayed by his daughter.

Rich tells DIYP a little bit about how this wondrous project came to be and how it was created:

Being a huge Star Wars fan, you could imagine my excitement when I took my family to see ‘Star Wars: The Force Awakens‘. As my family and I neared the end of the movie, I realized the character Rey (played by Daisy Ridley) was going to be one of those characters that was going to be awesome all on her own, without the assistance of needless, gender-based dialogue. From start to finish, the focus was on her character, not her own self awareness of reality-based gender limitations.

Since I’m the father of an amazing three year old girl, these characters have become very important to me. I know it’s essential that my daughter focuses on being the best she can be, regardless of the many boxes the world will inevitably try to put her in, and she needs strong female heroes she can look up to. As soon as she watched ‘Star Wars: The Force Awakens’, she was hooked. When the movie hit Bluray she watched it over and over, and Rey has since become her favorite character, all without any parental coercion from me. 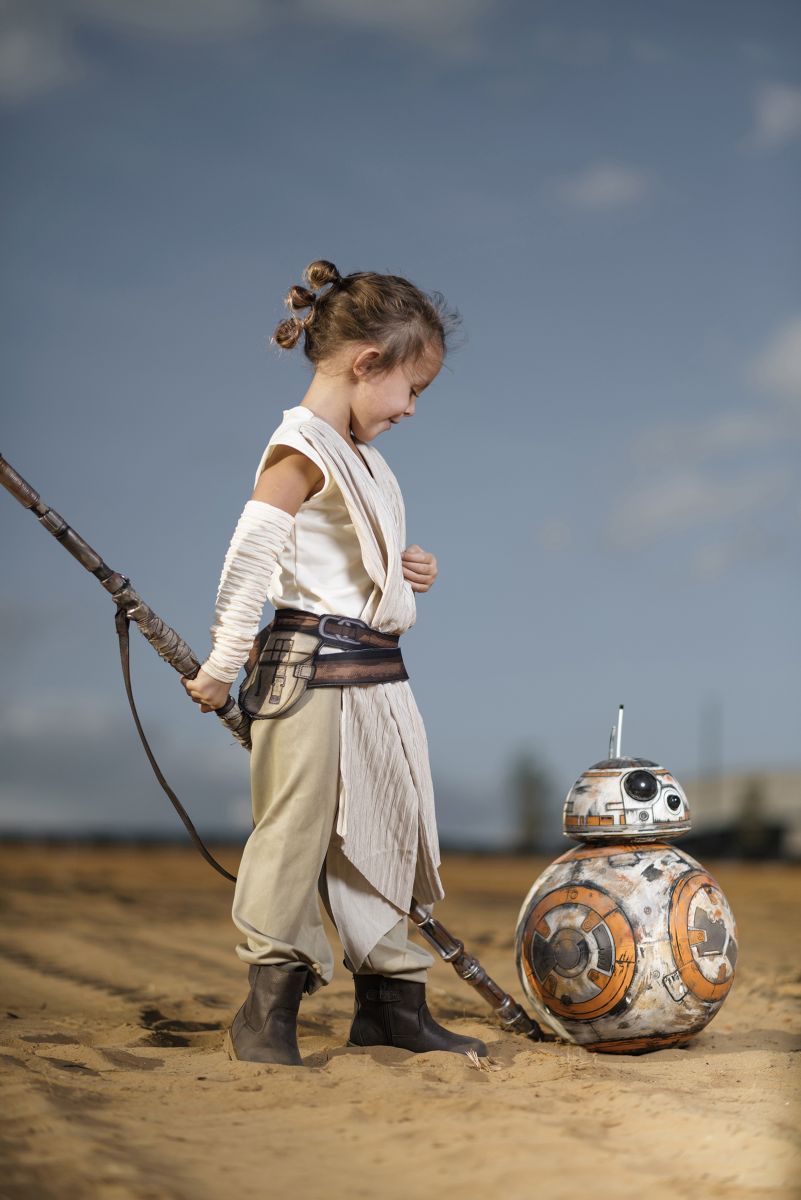 So, of course, I decided to do a photoshoot! Full on, out-of-control, dad support. It was a real challenge finding a Rey costume that fit a child, so I had to make a lot of it myself, or mod different parts of different costumes to fit her. It was well over a month before it finally looked right. Then I took my BB-8 droid (which I might’ve already owned…) and weathered it up with acrylic paint to look like less of a toy. Then a new challenge came along: location. Since we live in Florida, which is just a giant swamp, there’s not many places that look like the desert planet Jakku. Degobah, maybe, but not Jakku. I was determined though, and finally found a construction site with some tilled dirt that would work. 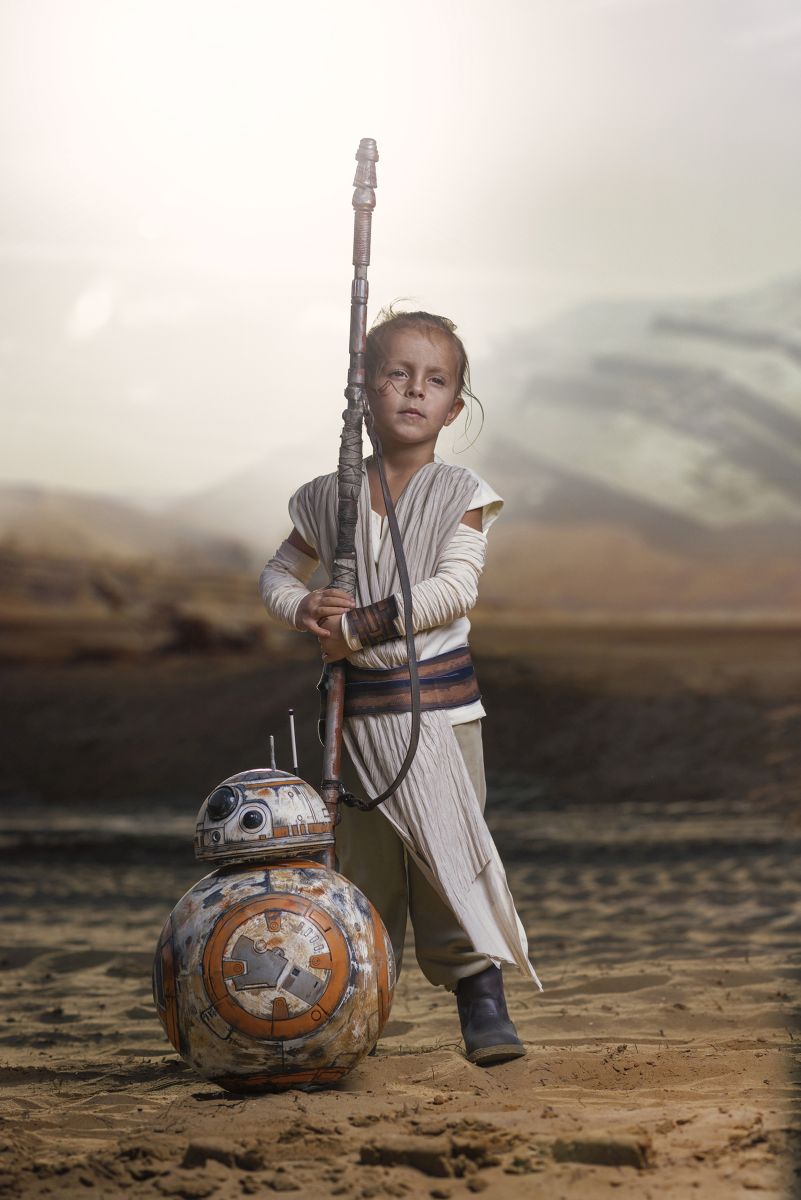 For this series I knew I was going to be shooting outside with the typical Florida sun high in the sky. I wanted this to have a very cinematic feel, and stay as true to the movie as possible. It would have been easy to photograph her being cute and just use natural light, but I wanted this to really pop. My goal was to create an image just as strong as the character my daughter has grown to look up to.

To accomplish this look I brought out the big guns and used a studio strobe on full power with a Westcott Halo modifier. I triggered the strobes with the PocketWizard FlexTT5 and the PocketWizard MiniTT1 for my Nikon D810. 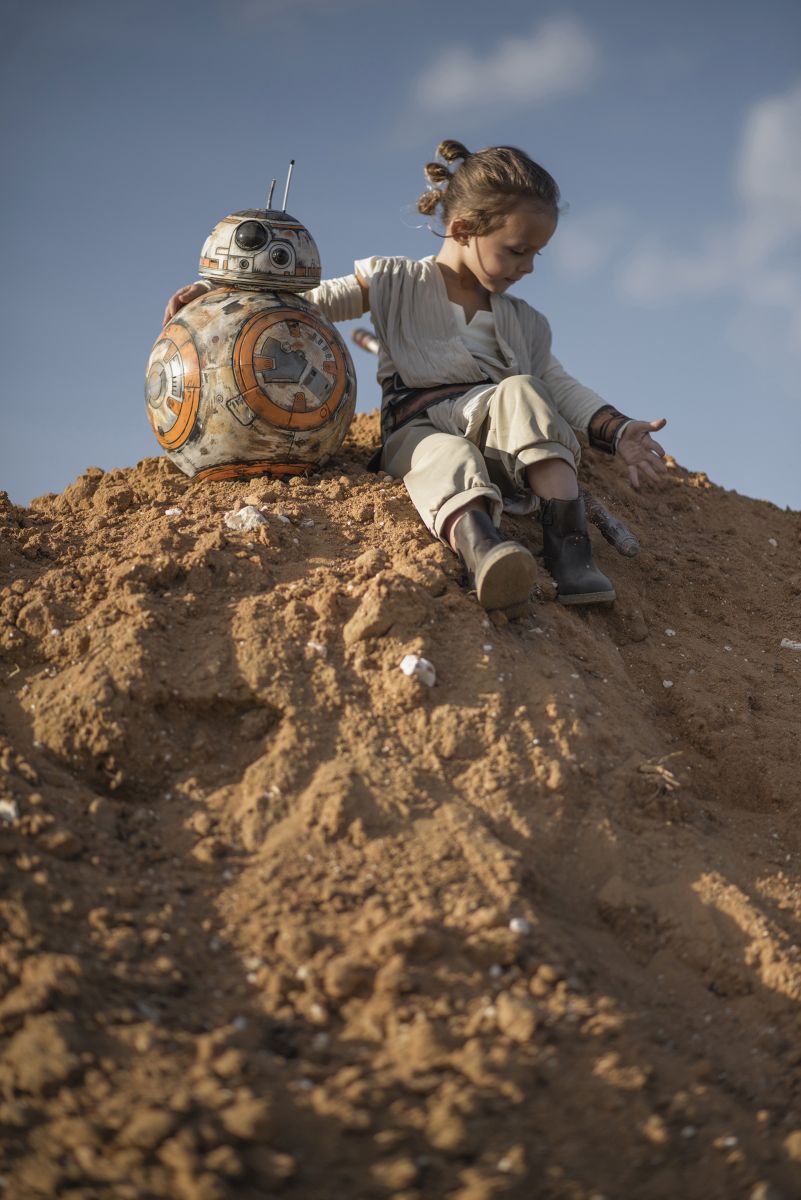 The location was not optimal due to it being peppered with large construction equipment and trees in the distance, so I shot this wide open at a F1.8. This made it so the buildings in the background looked like the market in the movie. Using just a wide open aperture, I had to bump up the shutter to as high as 1/8000s of a second on some of the images and shoot with the awesome High Speed Sync feature the PoketWizards offer. 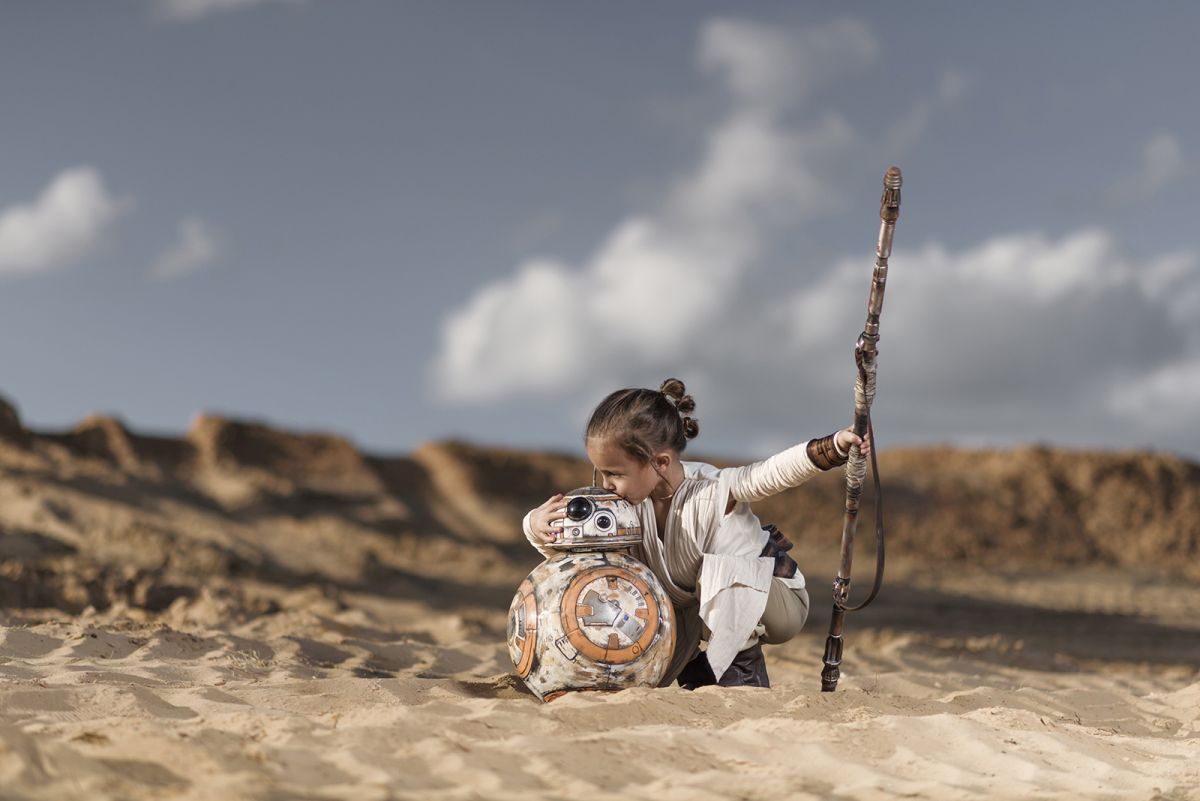 My daughter and I had a blast. She was fully into it, and shockingly into character for a three year old. I’d tell her to pose a certain way, and she’d refuse because “Rey wouldn’t do that, it’s silly.” Throughout the entire process, she took the shoot very seriously, and was more professional and determined than many of the professional models I’ve shot with. 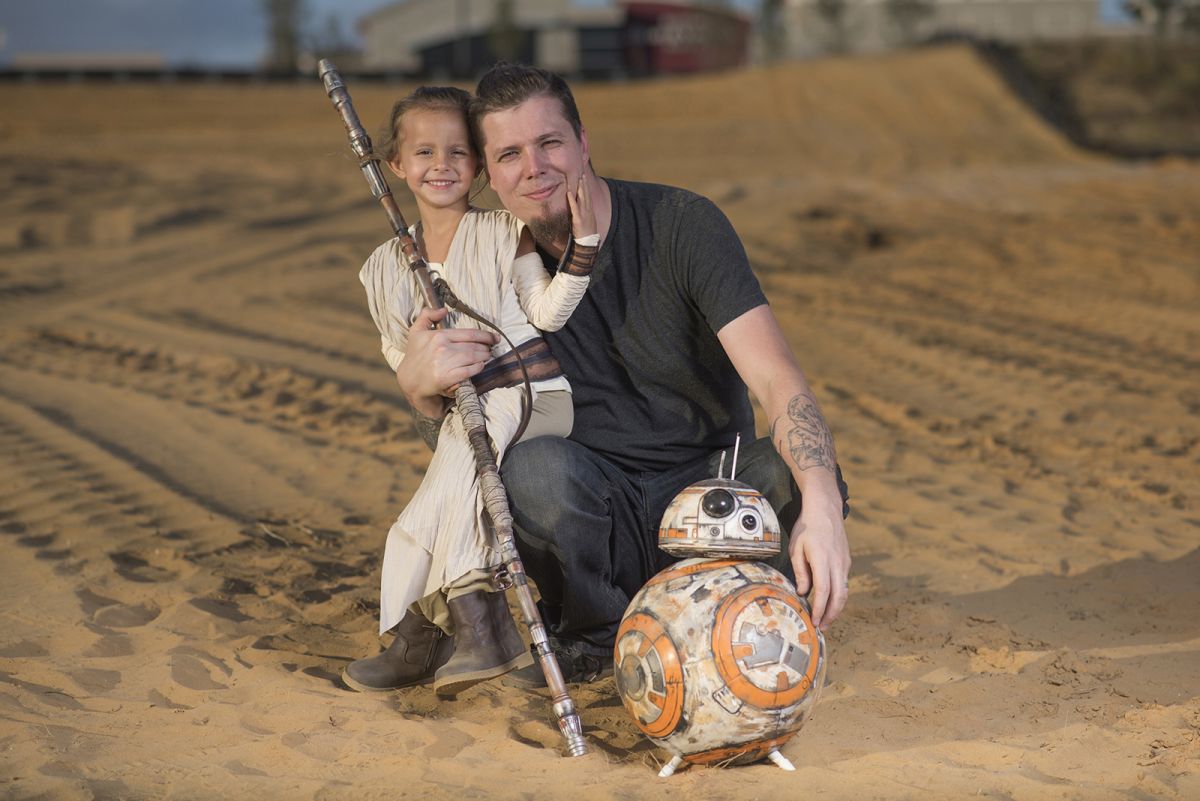 s I watched my three year old daughter wholeheartedly repeating Rey’s movie lines that I didn’t even know she knew to a plastic droid, in the middle of a construction site, in 90 degree heat, my thoughts that characters like Rey are sorely needed were affirmed. My daughter’s dedication to the character kept this series from turning into “just another little girl playing dress up” and made it easy to stay true to my original intent, to create a series my daughter would be proud of when she is older.  The process of creating the resulting images also reminded me of the importance of personal photography projects. Whenever I work on creating photos that actually mean something to me on a personal level, I’m reminded of why I became a professional photographer in the first place, and those projects always end up being my best work. These photos mean a lot to me, and I know that I’ll cherish the memory of creating them alongside my little one for forever.

If you want to see more of Rich Johnson’s work you can head over to Spectacle Photo – a studio that he runs.