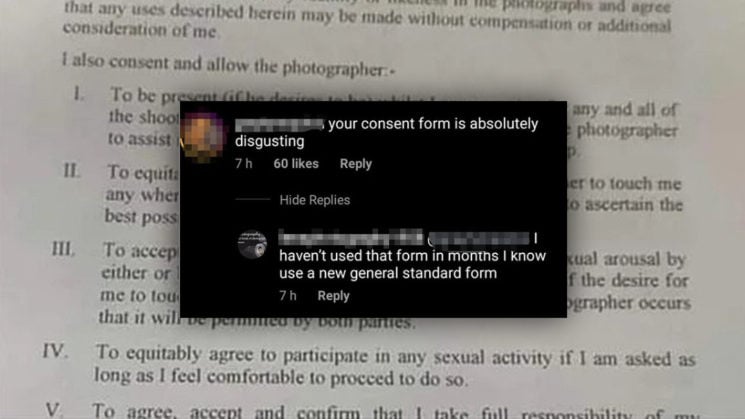 Well, this is one of the more disgusting photography-related bits of news I’ve heard lately. A Melbourne, Australia based photographer has been called out online after a photo was shared online of his “Consent and Release Form” which includes a “sexual arousal” clause and an agreement for “comfortable” models to “participate in sexual activity”.

It is claimed that this is the contact he presents to models, which they must sign in order for a shoot to happen. Yes, I’m going to get opinionated in this one. Sorry, not sorry.

The first couple of paragraphs of the contract seem quite standard. The first is somewhat obscured and difficult to read in the photograph, but essentially seems to say that the photographer owns the rights to the images, while the second is the model release…

I hereby release to the photographer all rights to exhibit this work in print and electronic form publicly or p4rivately. I waive any right, claims or interest I may have to control the use of my identity or likeness in the photographs and agree that any use described herein may be made without compensation or additional consderation of me.

After that, though, is where things get extremely shady.

I also consent and allow the photographer:

And then it the contract is cropped by the bottom of the image.

According to the Daily Mail, at least one model that spoke to them was approached on social media by this photographer attempting to procure their services as a model. After declining and ultimately blocking him, she says that he attempted to pursue her on other social media platforms instead.

The photograph of the contract was shared to social media to, not surprisingly, some outrage in the comments. Some screenshots of the comments have been posted to Instagram, where he claims that he “[hasn’t] used that form in months”. The fact that he ever used it at all is still pretty sick, in my opinion. 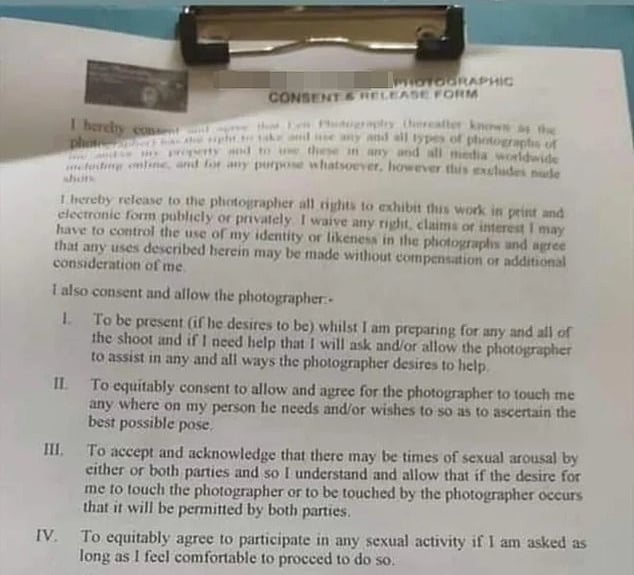 The Daily Mail also reports that the “photographer” in question (I put that word in quotes because I’ve looked at his “work”) has declined to respond to their request for comment and is seeking legal advice. They also say that his social media sites have been shut down since his contract was posted online, however at least one is still currently active. I checked.

Models and potential clients: If you are presented with contracts containing clauses like these, RUN! This is absolutely not normal and not standard practice amongst any industry in any part of the world. Don’t let anybody try to convince you that it is.

« Canon rises at Sony’s expense in the Japan mirrorless camera market
Do you want to become a better landscape photographer? »