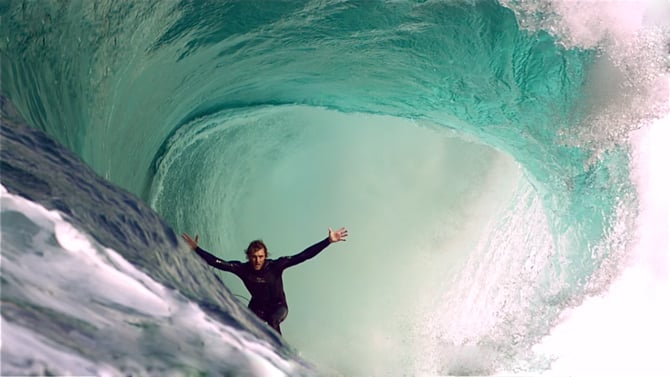 I have to admit, I get nervous enough just bringing my DSLR into the ocean even when I’m using a waterproof housing which cost more than my camera itself. Needless to say, it would be really difficult for me to slip into my wetsuit and take a $140,000 Phantom 4K Flex out for a little swim. In a housing I made myself, to boot.

Then again, I’m not Chris Bryan. Bryan, an Australian based sports cinematographer, has recently spent time in New York training to become a Phantom technician while also working closely with the camera makers to develop “his own unique custom light weight self contained underwater housing for the new state of the art Phantom Flex 4K, complete with Directors underwater video split.”

Bryan’s ambition payed off. In his short surf film “SHOCK MANSION (SURFING @ 1000 FRAMES PER SECOND),” Bryan shows off what’s possible using the product of hard work. The entire clip was shot on a combination of a Phantom Flex, a Phantom Miro M-320S, or a new Phantom 4K Flex, each outfitted with an Arri Ultra prime lens and each with it’s own custom made underwater housing.

The footage, which features Kelly Slater, Taj Burrow, Jay Davies, John John Florence, and many other of surfing’s biggest stars, is just as jaw dropping as you’d expect it to be, maybe even better. Take a look for yourself: