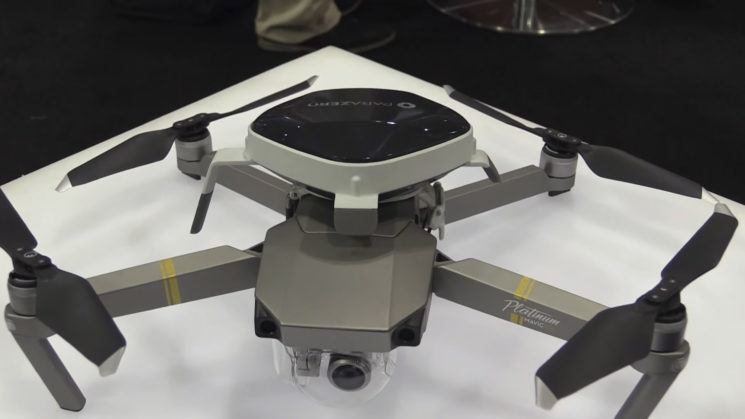 Founded in 2012, ParaZero specialises in the development of parachute systems for both manned and unmanned vehicles. And we’ve shown you some of their drone parachute technology a couple of years ago being tested on a 3DR Solo. Since then, ParaZero has gone on to produce a range of “SafeAir” parachutes for larger drone models, like the DJI Matrice 600 series.

Now, though, they’re looking at a more mainstream audience, offering new SafeAir parachutes for DJI’s very popular Mavic Pro and Phantom series drones. The biggest benefit of this new model is that in the event the chute needs to be used, it can be repacked by the end user, and reused in the future.

The SafeAir parachute straps on top of the drone over the GPS receiver, although they say it does not interfere with its abilities. It is able to detect freefall and excessive lean angles which will automatically terminate the flight, stop the propellers and deploy the parachute for a safe landing. At least, it’ll be safe as long as it doesn’t decide to kick in over water, I guess.

The SafeAir weights around 100g for the Mavic Pro version and 110g for the Phantom. This doesn’t really sound like a massive amount. It’s a little less than the GoPro Hero 6 Black, for example, but it is still fairly significant. The DJI Mavic Pro weights 734g in flight, so adding on another 100g on top about a 15% overall increase in weight. That’s bound to impact the flight time somewhat.

What may also negatively impact flight time is the design of the parachute. It’s not exactly the most aerodynamic of devices. So, the added wind resistance is likely to trim off some time, too.

Orin Aviram, ParaZero’s Chief Marketing Officer says that these devices were created in response to demand. He says that many professional users have been asking for a solution for smaller Phantom and Mavic Pro drones. So, they are delivering. So, if you’re not worried about flight time, and need those extra precautions on a paying gig, it may be worth it to have that peace of mind.

There’s no release date more precise than “Summer” and there’s no price less vague than “several hundred dollars” at the moment.

You can find out more about ParaZero and their parachutes on their website.