The Internet is flooded with reactions about the Oscar Best Picture gaffe, and the explanation is finally here. People have been speculating what went wrong that evening, and I’ve heard a bunch of theories since this historic mistake happened. But it turns out the whole mess was because of one tweeted photo of Best Actress winner Emma Stone.

Brian Cullinan from PricewaterhouseCooper and his colleague Martha Ruiz were in charge of handing out the category envelopes to the presenters. Right before the Best Picture was mistakenly presented to La La Land, he snapped a photo of Emma Stone and posted it on Twitter. Apparently, this distracted him, and he handed up the wrong envelope to the Best Picture presenters Warren Beatty and Faye Dunaway. 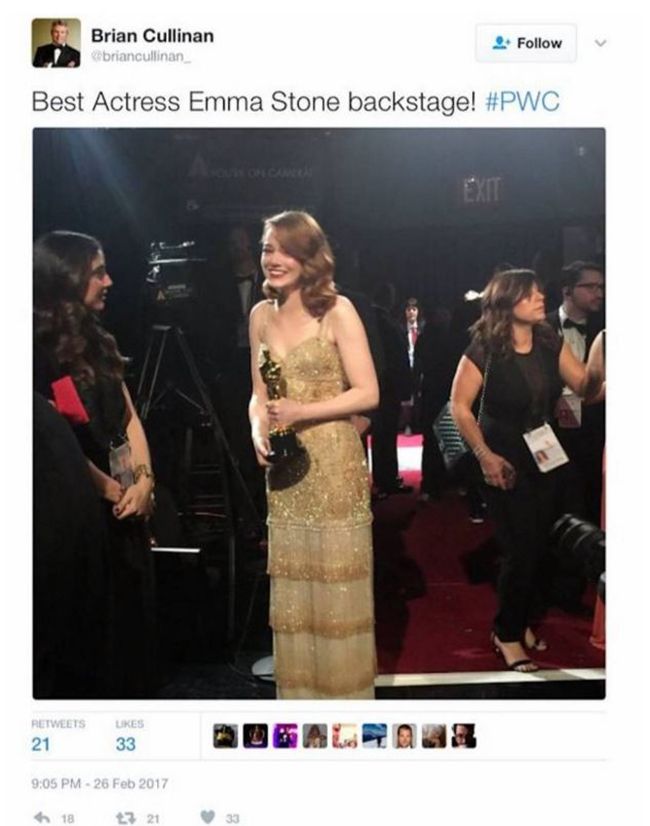 Warren Beatty explained that the envelope he held wrote “Emma Stone”. However, many people wondered: how was this possible, as Emma got her envelope after she received the Oscar statue? Well, it is possible – each Oscars winners’ envelope has a duplicate. Cullinan and Ruiz were holding one set each, and they were the only ones handing the envelopes.

Cullinan and Ruiz each have a briefcase containing all 24 envelopes for the winner announcements. They stand at either side of the stage in the wings and hand the envelopes to the guest announcers just before they head to the stage. And this is the first time envelope leaves their possession. As Cullinan got distracted for a moment, he messed up and gave the wrong envelope to Warren Beatty. So, basically, the mistake of epic proportions was caused by a tweeted photo.

Cullinan has deleted the tweet since, and he says he “feels very, very terrible and horrible” for what happened. I can’t even imagine what it’s like for him. Although I can’t blame him, I would probably get distracted myself if I met one of the best young actresses I’ve seen in the past decade.

Social networks are known for its power to distract you from your work. But this time, this distraction caused a mistake that will be written in Oscar’s history. It’s just show business, of course, but I believe an Oscar means the world to its winners. I can’t imagine the bitterness La La Land crew felt when they were told they’re not the winners after all.

I watched the Oscars live and I thought it was some kind of a joke. I love both movies, and I was equally thrilled for Moonlight as I initially was for La La Land. My theory was that something like this, that Warren Beatty got a duplicate of the envelope for Best Actress. But I’d never guess the whole mess was caused by a single photo posted on Twitter.

What do you think? Did you watch the Oscars? What was your theory about this blunder?

« Elinchrom literally launches the new ELB 1200 with amazing mid-air photo shoot
Your photos will get stolen. And what will you do then? »