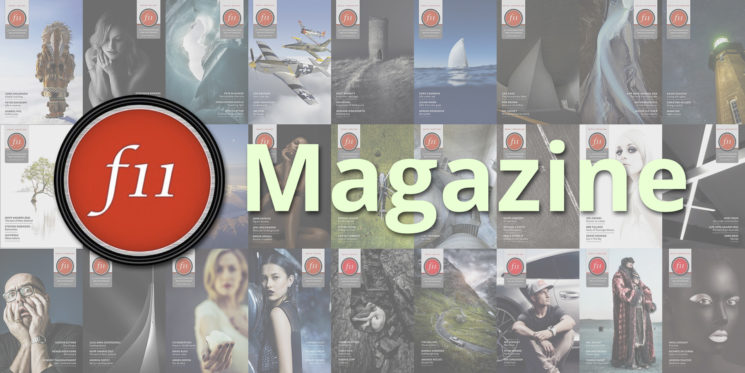 I was saddened to see this particular email show up in my inbox this morning. Online publication f11 Magazine is suspending its run, after only six years. F11 was created to have a focus on photography and the photographers who create it, rather than the gear. It was all about appreciating the work, and discovering the journey of those who make it.

I’ve been reading f11 Magazine for about 5 years now, and it’s pretty much the only monthly publication I do read. Printed magazines are boring to me, and I’d rather just read them on my iPad anyway. F11 magazine’s goal was simple. To create a free magazine for those interested in photography, paid for by advertisers and sponsors. But ultimately it was not to be.

Creating a business model based around giving your product away for free is not an easy task. Certainly not for the something like a monthly magazine, even if it is only available digitally. There’s still web development, hosting, designers, editors and other ongoing expenses.

This was the email I received this morning from f11 publisher and creative director, Tim Steele…

After six years and 66 issues of publishing f11 Magazine, I have made the incredibly difficult decision to place the magazine in suspension. There are no new issues planned at this stage.

The idea of a magazine about photography and photographers – rather than cameras and accessories – found a loyal and appreciative audience around the world. I like to think that our approach was more cerebral than many other titles, and that we were able to rise above the perils of pixel peeping, equipment worship, and the banal. Our mission was to expose the work of photographers, display their collections, and describe their personal journeys. We were never short of content as we made the world our home.

Unfortunately, the concept of a magazine free to readers and funded entirely by advertising support proved much more difficult to sustain as a business proposition. I’m investigating other options to keep the title alive in some form, but this will take time and dialogue with others – hence the decision to suspend publication at this point. It’s my hope that a successful outcome from one of these conversations will expose the magazine to a much larger potential audience, while at the same time ensuring its financial viability with a new business model.

If you have been a reader, a commercial supporter, or simply a believer in our approach to content and community I thank you sincerely for your encouragement and participation. I know not what the future holds for f11 Magazine, for photographers and aficionados, but I’m personally proud of the content and quality that a small team has been able to produce consistently. We’ve been on time, on topic, and appreciated for 66 consecutive issues – and that’s no small achievement.

Once we have a meaningful update to share, I’ll be sure to let you know. Equally, if you have any thoughts that you’d like to share with me, please feel free to get in touch: feedback@f11magazine.com.

Production hasn’t officially ended. It’s simply been suspended until they can figure out a way to keep it alive. Hopefully, Tim and the team can find a way to make this happen. It’s a fantastic showcase of work and talent, and I for one would miss it dearly.

In an age where printed magazines seem to be disappearing on an almost weekly basis, it’s sad that we’re now seeing one of the great digital photography magazines going the same way. You can’t even give stuff away these days, it seems.

If you’ve never seen f11 magazine before, it’s well worth checking out. Please do visit their website. Download and read through some of their back issues. Let them know how much you appreciate what they do. And if you have any suggestions for Tim, get in touch with him at the address above.