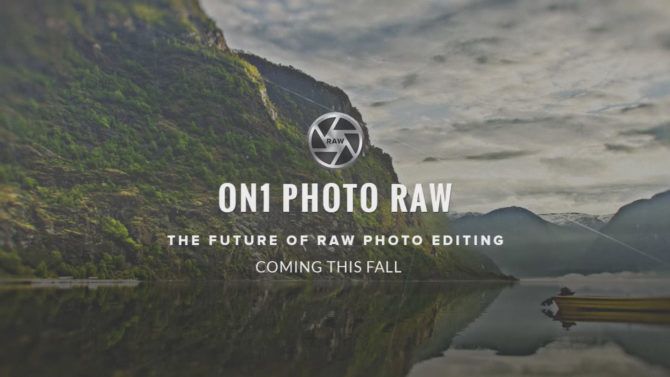 ON1 is a name that seems to be practically a household name these days, and ON1 Photo has become an essential tool in the post processing workflow to many photographers, but one thing it’s lacked is a quality RAW processor.

Now that’s set to change with ON1 Photo RAW, which they’re describing as “the first all-new RAW processor and non-destructive photo editor to be released in more than a decade”.  So, if you’re sick of the current options and want something new and fresh, here you go!

Expected to come in the Autumn, ON1 have released a few videos to highlight some of its features.  One of the key points they’ve focused on during the development of their new software is a simple one; Speed.  Aiming to be the fastest performing RAW processor out there, it certainly shows some promise.

Matt Kloskowski certainly seems very impressed by the fact that we no longer have to import all of our images into a catalogue in order to see them.

You simply go to the folder where your photos live and you can start looking at your photos instantly.

It’s gonna be the future of RAW processing.

While the demonstrations are rather impressive, the future of RAW processing sounds an awful lot like Adobe Bridge & ACR.

Supporting over 800 RAW formats, ON1 Photo RAW offers a whole host of retouching and other effects to work on your images built right in that you don’t normally expect from a RAW processor.

Offering a whole range of styles and features over existing RAW processing options, ON1 is hoping to make a big impression with the first release of ON1 Photo RAW to pull you away from the competition.

ON1 Photo RAW can act as a Photoshop, Lightroom, Apple Photos, or Corel PaintShop Pro plugin, but also as a host application to send to other applications like Google’s Nik collection.

Between this and Affinity Photo, it looks like Adobe might be starting to see some serious new competition.

The only thing I’m curious about is if it supports camera profiling with the X-Rite ColorChecker Passport.

ON1 plans to release the new software as part of their $150/yr ON1 Plus Pro membership.  This membership is not like Adobe’s subscription model, however.  The membership fee gives you access to all the latest updates as they happen, but you are granted a perpetual license to use the software.

So, even if you give up your membership, you can still continue to legally use the software forever.

Upgrade prices for those who have purchased ON1 Photo 10 will be announced at a later date.

You can learn more about ON1 Photo RAW at the ON1 website.

« This small hovering drone that follows you around, can be controlled from your phone, shoots 4K video and doesn’t require FAA registration.
Lean Photography »