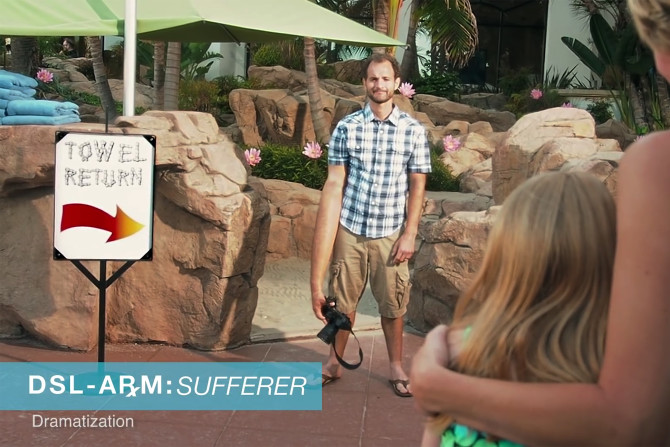 DSLR cameras have their fair share of advantages and disadvantages over their smaller rivals, but at the end of a long shooting day there’s one difference than lingers on – the weight.

The size and weight of a DSLR might feel right for those who shoot with long lenses or have big hands, but usually it’s just the price one has to pay to enjoy the benefits DSLRs have to offer.

With mirrorless cameras gaining popularity, the weight issue has become more important and an increasing number of photographers are deciding to compromise somewhat in certain parameters in exchange for a lightweight system.

Obviously Olympus won’t advertise the OM-D EM-5 Mark II’s shortcomings, but it created an entire (hilarious) mocumentary campaign around DSLR shooters suffering from the DSL-ARM syndrome, where the arm carrying the heavy camera becomes longer than the other arm.

“Many people living with DSL-ARM are suffering silently – unaware that there’s a cure,” says the Olympus website. Unsurprisingly the cure for DSL-ARM happens to be the new Olympus OM-D EM-5 Mark II, which is said to offer “all the power at almost half the size of a DSLR”.

“For the longest time, I thought I was alone. But look around, man. This affliction is everywhere. People need to know, there’s no reason to live with this shame”, says Paul, who suffers from an extreme case of DSL-ARM.

I can’t see myself moving to an Olympus MFT camera anytime soon, but my hat’s off to them for this brilliant campaign.

The behind-the-scenes video below reveals that several of the actors are actually Olympus employees and shares some serious information about the concept behind these videos.

[via Olympus via The Phoblographer]

Sony sells its whole 5% stake in Olympus back to Olympus