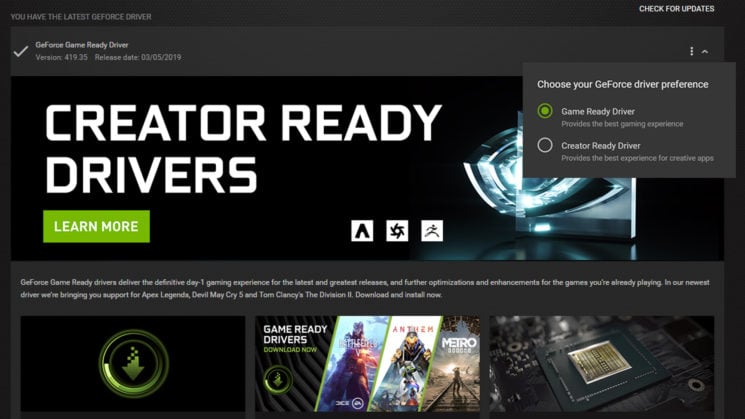 Nvidia claims they offer increased performance while offering greater stability with the apps that many photographers, video editors and other creatives use on a daily basis. Applications like Adobe Photoshop CC and Premiere Pro CC, both of which, Nvidia says see up to a 9% performance increase. 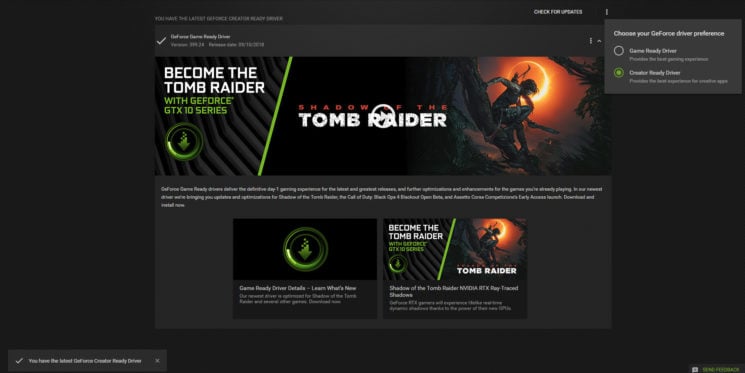 Nvidia says that the Creator Ready Driver releases are “timed to key creative application updates, ensuring the best compatibility and performance for those who depend on PCs for their creative work”. The download page boasts up to 13% improved performance in Blender Cycles rendering engine, as well as up to 9% in Photoshop and Premiere Pro and 8% in Cinema 4D.

While they don’t give specific numbers for the others, they say it also provides an “optimal experience” for Autodesk Arnold, Unreal Engine 4.22, Redcine-X Pro, Adobe Lightroom (presumably they mean Classic CC) and Substance Designer (at least, since Adobe bought it).

From looking at this performance report from Puget Systems, though, it’s difficult to really corroborate the performance claims, as Nvidia hasn’t stated exactly what the software was doing in order to present these performance gains. Puget Systems tested the new 4.19.67 CRDs against four previous versions of the regular drivers, and the performance seemed mostly similar between all of them.

So we don’t know if these tests are based on the everyday operation of the software, or very specific tasks that just happened to perform particularly well with the new drivers. A lot of software, like Premiere Pro, is still primarily based on CPU performance, not the GPU, so it’s difficult to really know what methods they used.

According to PCGamesN, there isn’t that much performance difference between the new CRD vs the Game Ready Drivers (GRD), but that the CRD should offer more overall stability – a valuable feature to creatives who don’t want their graphics card & software to crash and reset in the middle of working.

That is not to say that there won’t ever be a big performance increase in creative applications, but right now there doesn’t seem to be a definitive way to test it against the GRD to back up Nvidia’s performance claims. As new software is released from Adobe and other companies, though, we might see them starting to run much more efficiently using the CRD vs the GRD.

But the release cycle for CRD is expected to be much slower than that of GRD where gaming performance is prized over stability. Although, many run GRD just fine for creative uses without any stability issues. If you’re one of those who doesn’t have any problem with the Game Ready Drivers, you might be better off sticking with them for now until we can see exactly where the CRD’s performance benefits lie. But if you do have stability issues, then you may likely be better off sacrificing a little short term performance vs the GRD to solve that particular problem.

I have two laptops here with Nvidia GTX 1050 GPUs, both running the Game Ready Drivers, and I’ve not experienced any issues with them yet. I have just switched one over to the Creative Ready Drivers, though, so let’s see how well it performs in the long term.

Have you installed the Creative Ready Drivers yet? Have you noticed any performance or stability increases?