Warning: Strong Language in the video above.

We’ve been covering stories over photography and it’s run-ins with the law for a while now. Most of the time, it’s the same frustrating types of events happening in different situations; a cop might tell someone to turn their camera off in a public area, someone might get a verbal harassment – whatever it is, it tends to make its way across social media everywhere each time it happens. People get frustrated to see things like that happen to them by the very force that should be upholding the law.

Shot at Hammonasset Beach in Madison, CT, this video started recording after the cameraman had finished his last round of quadcopter photography around the park. At that point, a woman named Andrea Mears, 23, approached him and proceeded to call the police, apparently not liking the fact that he was using the device in a public area. This is where the video starts, after the guy realizes just how aggressive the woman is being.

What ended up happening is something I can only wish this article’s title was exaggerating: after getting off the phone with the police, Andrea Mears full-on plummeted the photographer, throwing punches, ripping off his shirt, and verbally threatening him like it’s a story of personal revenge.

Normally, this is where I’d cover my words on what happened in the video, and how it’s another example of photography clearly not being a crime. But this video unearthed something more troubling; when the police finally arrived, the cameraman claims he had to show them the video he secretly recorded in order to show them that the woman assaulted him.

If all of that is true, then had he not taken that video, he’d be getting arrested because the first thing Andrea told the police was that he assaulted her. The sickening thing this video brings up about the social state many of us live in today is that this could easily have gone wrong because of Andrea’s actions as a woman. It’s sickening that the entire time I was watching her beat him, I was wondering why he wasn’t hitting back until I realized it’d make everything worse. Even if it was in self defense, it’d do nothing positive for him in the face of authority. It’s sickening to realize that in order for this guy to have the woman get arrested, he had to have been videotaping it, instead of getting her the hell off of him. 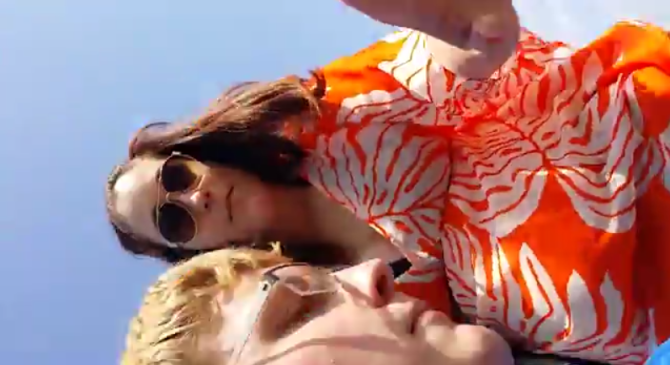 Things aren’t right when we’re a society of people who feel like we need to record something to secure ourselves, instead of defending ourselves. What Andrea Mears did may be a result of a state of mind only few people share along with her, but they could have ruined someone’s entire life – all because of what her gender was compared to his. Because he was a guy, the fact that he was using a quadcopter at the beach justified calling the police and attacking him for being a “f*cking pervert”. And because she was a woman, she could have been trusted without much persuasion as all.

Well, hope you didn’t mind being photographed too much there, Andrea. You’re all over the web now.

UPDATE: We have replaced the video with another version(thanks Rick), see why: Youtube took the video down with the reason: “This video has been removed as a violation of YouTube’s policy prohibiting content designed to harass, bully or threaten“. Here is the link in case it ever comes back. Sadly, youtube does not share any further details on why the video was removed.

Woman Who Assaulted Boy With a Quadcopter Gets Probation