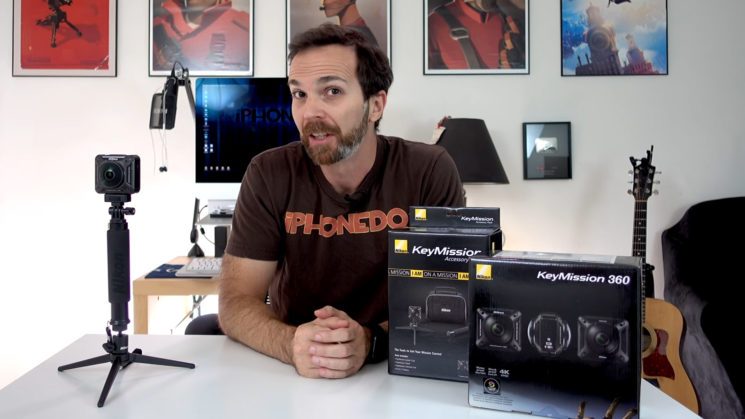 Nikon’s KeyMission 360 camera landed with a fair bit of hype when it was first announced in January. A real camera manufacturer was getting into the 360° market. A company with a hundred years of photographic history. Then after delays in release due to earthquakes, the KeyMission 360 was re-announced, along with two more 80° and 170° cameras.

I got to see the KeyMission 360 in person twice this year, at The Photography Show in March, and at Photokina a couple of months ago, but they wouldn’t let us get our hands on them to try them out for ourselves. With all three cameras now out in the wild, the reviews are starting to come in. After watching this video review from iPhonedo, it’s not looking great for Nikon.

After watching the complete video, I have to say I’m more than a little disappointed. As was iPhonedo, obviously, given that he returned it to the retailer after giving it a thorough workout.

I’ve been in the market for a 360 camera for a while, and this one was definitely on my Christmas list. Now, not so much. Despite shooting 4K, the quality just simply isn’t there. It’s certainly it’s not up to the quality we’ve come to expect from a company like Nikon. The mobile app to control it, however, is pretty much exactly what we’ve come to expect from Nikon.

Most shocking was that it was beaten out by a $199 iPhone addon that only shoots 1440p. Even upscaled to 4K, the difference between the two when it came to sharpness was noticeable, and the colours far more realistic (although the Insta does seem to tend to overexpose quite a bit). And if you want electronic image stabilisation with the KeyMission 360, you’re not going to get it if you’re shooting 4K, degrading the footage even further.

Ultimately, it looks like a pretty average effort on Nikon’s part. But, this is the first camera of its type for Nikon. So, hopefully they’ll learn from it, quickly, and fix the issues when they release a Mark II. Either that, or they’ll give up on this style of camera completely, and finally give us a decent mirrorless.

Have you bought a KeyMission 360? Are your results the same as those found by iPhonedo? Has seeing this now scrubbed the KeyMission 360 off your list? Did you get another 360 camera instead? Which did you get? and why? Let us know in the comments.