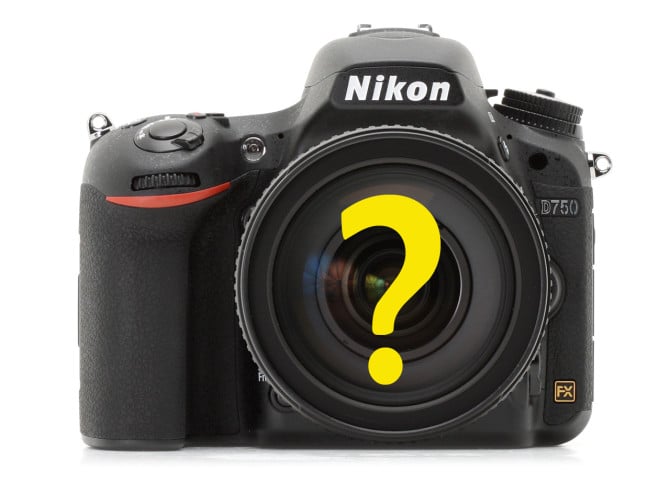 Just five days ago Nikon announced that it will repair D750 cameras that are affected by the flaring issue at no cost, giving their customers peace of mind.

As of 12 hours ago, give or take, Amazon have stopped selling Nikon’s newest full frame DSLR, and suspended existing orders.

Is Nikon hiding the severity of the problem or are Amazon afraid of getting caught up in a lawsuit?

It is no secret that the D750 has been facing flaring problems. While the problem may not affect all D750 cameras, and is not a big deal for most users, it is a problem nonetheless.

For those of you who haven’t been following, here’s a quick recap:

“We have received indications from some users that when photographing scenes in which a bright light source, such as the sun or high-intensity lighting, is at a certain position along the top border of the frame, flare with an unnatural shape may sometimes occur in images captured with the D750 digital SLR camera.

We are currently looking into measures to address this issue. Further details will be announced as soon as they are determined.”

“On December 29, 2014, we announced that we were looking into measures to address the issue reported by some users, namely that when photographing scenes in which an extremely bright light source, such as the sun or high-intensity lighting, is positioned near the top edge of the frame, flare with an unnatural shape sometimes occurs in images captured with the D750 digital SLR camera.

To correct this issue, Nikon will inspect and service, at no cost, the camera’s light-shielding components and adjust the AF sensor position.  We plan to initiate this service at the end of January and will announce further details, including instructions for requesting servicing, shortly.

Please direct inquiries regarding this matter to Nikon Customer Relations by phone at 1-800-Nikon US (1-800-645-6687), 9AM–8PM EST, Monday to Friday (closed certain holidays) or online here.

We sincerely apologize for any inconvenience this issue may have caused, and ask for your continued patience and understanding.”

It is obvious by Nikon’s response that there is in fact a problem with some of the cameras, but everything we know by now indicates that it’s a relatively minor issue that will be fixed by visiting Nikon’s service centers.

But if that is true, why did Amazon all of a sudden stop selling the D750?

Reddit user dihmad shared an email he received from Amazon Product Safety stating that due to a “potential issue” with the D750 he must contact Nikon USA for further instructions on how to proceed with his order. 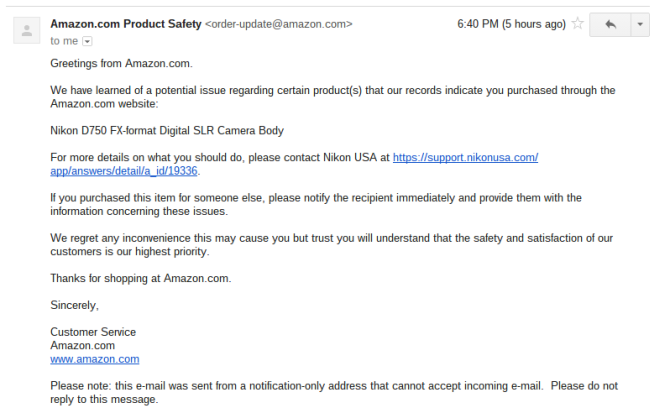 Additionally, while the camera has been completely removed from Amazon US, it is still sold as a kit (only) on Amazon UK and is also available for purchase on Amazon Germany’s website.

The error message displayed on amazon.com when following a link to the D750

The fact that B&H, as well as several other US-based online stores I have checked, still sell the camera indicate that this was Amazon’s call and not a general recall by Nikon.

It is entirely possible that Amazon knows something unknown to the rest of us about the flaring issue which lead to its decision to stop selling the camera. It is also feasible that Amazon simply prefers to temporarily freeze sales until it receives a problem-free batch from Nikon, in order to prevent its customers from going through the trouble of fixing their cameras.

That being said, I can’t help but wonder if talk about a potential class action lawsuit against Nikon is the reason behind this. Following Nikon’s settlement in the D600 class action lawsuit, it is possible that Amazon prefers to avoid being part of the mess or selling a product it knows is potentially faulty.

At this point we can only speculate, as neither Amazon nor Nikon have made any statement regarding the removal of the camera, but I’m sure an official response will be issued before too long.

UPDATE: according to nikonrumors Nikon is doing a Silent Recall for the camera, and a  new batch of D750 DSLRs is expected to reach retailers in early February. It seems that UK stores have followed suit, and I expect we will soon see the same happening in other countries. We’ve updated the title accordingly.