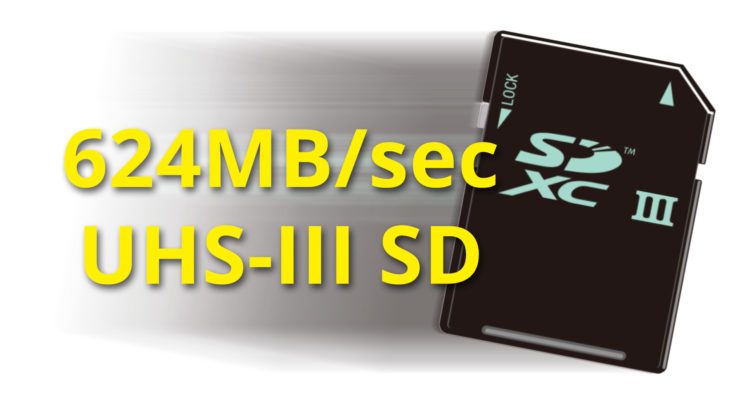 Just as Sony hits the “world’s fastest” mark with their new SF-G Series UHS-II cards, the SD Association comes along and moves the goalposts. Well, this card is almost at the theoretical 312MB/sec limit of the UHS-II specification. The SD Card Association have now announced the new UHS-III specification, which doubles this limit to 624MB/sec.

With cards ever expanding in size due to the demands of today’s gear, the speed has to also increase. Even if that increase really only benefits the speed at which you can back everything up to your computer. Of course, there will be real world benefits. Now that the megapixel wars seem to have shifted from stills to video, the SDA specifically cite 8K footage as one of their considerations.

So, very heavy data producing products, and speed of workflow are the primary targets for the new spec.

The original UHS-I spec was released in 2010 and has a top speed of 104MB/sec. This is the card spec that many of us use today. It easily handles 1080p, and most consumer level 4K video. This was tripled to 312MB/sec with the introduction of the UHS-II spec in 2013 which allows for larger codecs and less compression. 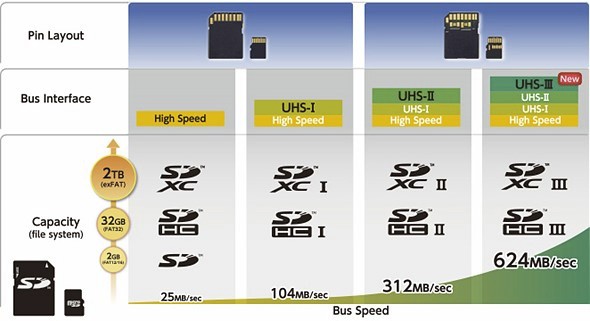 Even shooting stills, it means cameras can clear buffers faster on cameras that support the spec. UHS-III is to be fully backwards compatible. So you can use the new faster cards in older devices, at a slower speed. And you can also use slower spec cards in UHS-III devices as they are released. Although, I would expect the latter to choke a little if you’re trying to shoot video at high bitrates.

There’s been no announcements from any manufacturers yet. So, when we might start seeing UHS-III cards and devices pop up is anybody’s guess. But, maybe now we’ll start to see those 1TB SanDisk SD cards become more than just a prototype.

You can find out more about the new UHS-III spec here and here on the SD Association website.