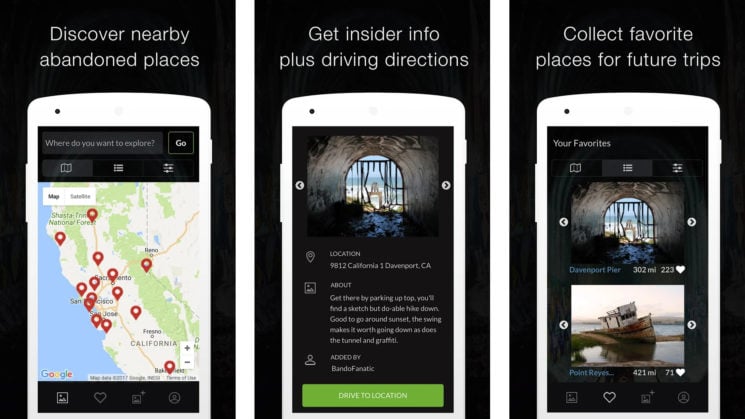 This is one of those things that’s definitely going to split people up into two camps. In one, there’s those who’ll think it’s awesome, and in the other, there’s those who believe that the types of locations to which this app allows access should remain secret.

You guys can discuss the camps to which you belong in the comments, but let me introduce you to Forgotten, a new mobile app for iOS and Android. It’s an app to help you discover new place to shoot or “sell” your locations. It’s the latter part of that which Forgotten says makes them different from similar apps and services that have popped up in the past.

According to the app’s description on the Google Play Store…

Discover new places to shoot or sell locations of past spots to other abandoned photography fanatics.

While it’s possible to discover the secrets of an abandoned place on the web, or pry them from a friend’s lips, on Forgotten the community is empowered to share their experiences by earning real money for their hard work and time spent in the field.

I do think that the idea of “selling” locations is a bit weird, especially random abandoned places that aren’t your own property. Although a fee might curtail those who would simply go to a location in order to trash it. But then, people might also think they’re buying the “right” to shoot there, and they may potentially be more inclined to trash it once they’ve shot there to ensure nobody else can.

What if a location listing goes up and it gets “sold” to a bunch of people right away and they all show up at once? And, there’s really nothing to stop somebody from paying you for your location and then just telling everybody where it is anyway, or selling it themselves.

For those who struggle to find locations who are genuinely interested in getting into photographing abandoned places, it could work out rather well.  But for me, while I like a good abandoned place every now and again, I think I’ll pass on this one.

I think it’s a potentially good idea, but I think I want to follow how the implementation plays out a bit more first.

If you want to check it out yourself, head on over to the Forgotten website. The app is available for both iOS and Android.

The end of a long-forgotten era: Google is officially killing off Picasa