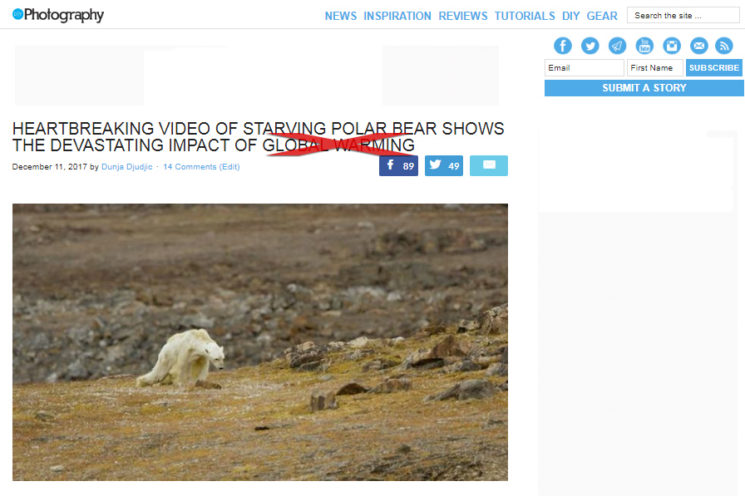 Perhaps you remember the heart-wrenching video of a starving polar bear taken by National geographic Paul Nicklen in December 2017. He and Cristina Mittermeier photographed and filmed the poor animal on the Baffin Islands in Canada, and at the time related the bear’s condition with global warming. However, in a recent article, Mittermeier admits that National Geographic “went too far” connecting climate change with the particular starving polar bear.

Mittermeier is one of the founders of SeaLegacy, the organization that uses photography to spread the message of ocean conservation. When she was photographing the particular emaciated polar bear, Paul Nicklen filmed the video. He later shared it on Instagram, and in the description, he wrote “This is what starvation looks like. The muscles atrophy. No energy. It’s a slow, painful death.” He used the video as an example, to point out to the possible consequences of climate change. He also proposed the steps we can do to be a part of the solution rather than a part of the problem.

However, Mittermeier explains that National Geographic picked up the video and added subtitles. In their version, the subtitle reads “this is what climate change looks like.” And Mittermeier says that NatGeo went too far with this caption.

With this image, we thought we had found a way to help people imagine what the future of climate change might look like. We were, perhaps, naive. The picture went viral—and people took it literally.

After National Geographic’s (mis)interpretation of the images and video, the things sort of went out of control. As Mittermeier puts it, she, Nicklen and the team “had lost control of the narrative.” The photographer explains that this approach made them become “yet another example of environmentalist exaggeration.”

Mittermeier now says that, perhaps, it was a mistake not telling the full story. They used the starving polar bear as a means of foreseeing the future, but they didn’t explain that they didn’t know what had happened to that particular animal.

National Geographic had its own interpretation of the images and video. It wasn’t too far from Nicklen’s description, to be fair, yet it caused many misunderstandings. Still, I believe that the photos and videos in question can serve as an example. They can tell us what the future might look like, no matter what had happened to that particular polar bear.

[via The Western Journal]