If you’ve ever seen a rocket engine in action, you probably noticed the bright flame that emerges from the back of it. In fact, that bright fire was probably just an overexposed blob. Nasa’s new High Dynamic Camera system – the HiDyRS-X uses HDR techniques to show that wonderful flame in all its glory. It does so using a special sensor with built in HDR abilities.

First here is the high speed movie of the rocket engine:

How it is possible to correctly expose for all the elements of the fire? The answer is in the video description:

HiDyRS-X records high speed, high dynamic range footage in multiple exposures simultaneously for use in analyzing rocket engine tests. Traditional high speed video cameras are limited to shooting in one exposure at a time, but HiDyRS-X can record multiple high speed video exposures at once, combining them into a high dynamic range video that adequately exposes all areas of the video image for comprehensive analysis

How is is possible to “record multiple high speed video exposures at once“. If you look at the HiDyRS-X  page it has an explanation. Usually HDR is made from several photos with different exposures. An algorithm then picks the right exposure for each pixel: one that is not overexposed or underexposed. This process necessitates several exposures. A killer for high speed photography.  But for the HiDyRS-X each pixel on the sensor “knows” to make its own “right” exposure:

Camera exposure will instead be controlled at the chip/pixel level and then integrated into a high-speed video camera. The resulting HDR capability will be easier to install and operate within the SSC test stands because the entire system will be contained within a single camera; this is a completely revolutionary and innovative means to generate HDR capability with high-speed video when compared with the labor-intensive steps associated with the careful alignment required when multiple cameras are used to generate similar imaging results.

But it gets even better, using several such cameras and some advanced computational imaging, NASA will be able to generate full 3D HDR movies of rocket engines. Expect bursts of fire coming to a cinema next to you soon. 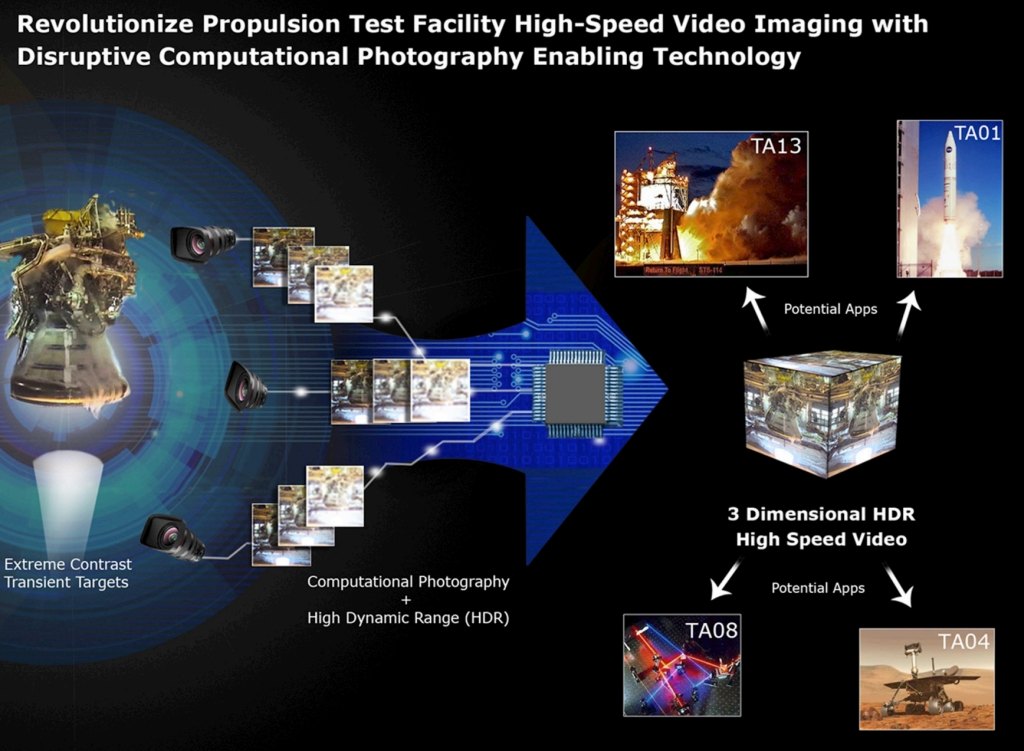 As an added bonus, youtuber Dmitry Grigorev made a stabilized high speed version of the video where you can see the thrusts vectoring:

« How a frying pan can help you take photos and videos from super low angles
Nikon sales are down, but profits are up. Study suggests this pattern will continue »