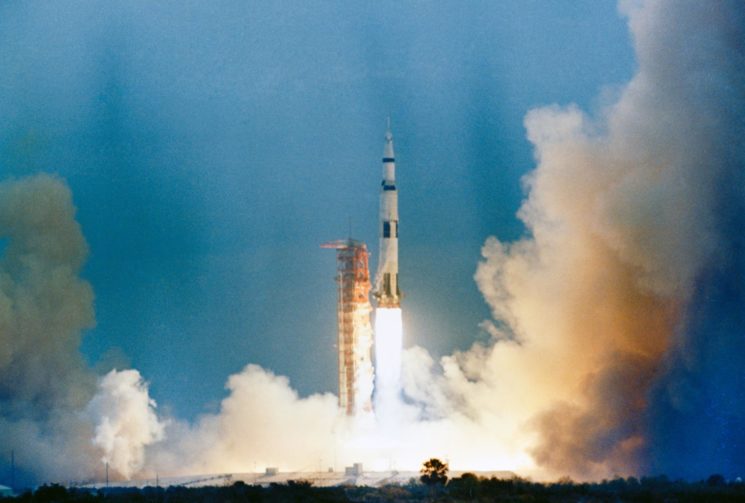 We’ve seen before that Apollo astronauts were darn good photographers. But what about those amazing close-up videos of launches, have you ever wondered how they were filmed? Curious Droid did some research on the matter, and they bring you some interesting information and BTS videos. It was all long before DLSR and digital mirrorless digital cameras were sent to space, and it’s really interesting to watch.

These launch videos are certainly amazing to watch, but their primary purpose was not to impress us. It was to show the engineers and scientists what exactly was going on at critical stages of the launch. In cases of disasters, these videos were the key to find out exactly what had happened.

The video starts with the beginnings of rocket launch videos, which were anything but safe to make. Walter Bruch invented the first CCTV system to observe the launch from a safe distance. When V-2 was launched, the cameraman had to stand near the test areas to film, and it was extremely dangerous.

Ever since 1940, the engineers have been modifying movie cameras so they can withstand the impact of launch and of the landing back to Earth. In October 1946, a camera with Kodak Super XX film running at 4fps was placed in an aluminum case with 10mm thick walls and into the body of the V-2 rocket. This was the first time anyone had seen the Earth from the edge of the space.

As the rockets became more complex, so did the camera systems that were necessary to film the launches. For example, the Apollo 6 launch was filmed with 16mm film at 500fps. By the time of Apollo 11, the launch was covered by 201 cameras: 119 for engineering and 82 for documentary purposes. They had to be protected from the heat and the impact of the launch in order not to get completely destroyed.

From the 1960s, the companies made purpose-built tracking mounts for filming rocket launches. Along with the powerful telescopes capturing the launch and stage separations from the ground, there were also cameras inside. They were mounted in the base of the stages, filming stage separations. It’s interesting that Apollo 4 had these cameras, and their footage is often related to Apollo 11.

In the 1960s, the cameras were also added to other parts of the rockets, such as kerosene tanks and hydrogen tanks. They would show the engineers what was going on and help them track the launches. But videos like this are also really satisfying for us who are just curious to see what these parts of the rocket look like.

On 28 January 1986, a disaster happened. Challenger broke apart 73 seconds into the flight. Although it was far too late to do anything, the footage of the launch was crucial to discover what had gone wrong. As a matter of fact, the tragic event led to using the cameras even more to cover the rocket launches. Nowadays, rocketcams are used on all NASA’s launches.

You can see plenty more information, trivia, footage and photos in the video above. In 17 minutes, it guides you all the way through the history of cameras related to NASA’s projects.

[How did NASA Film Apollo, the Shuttle and Other Launches | Curious Droid; image credits: NASA]