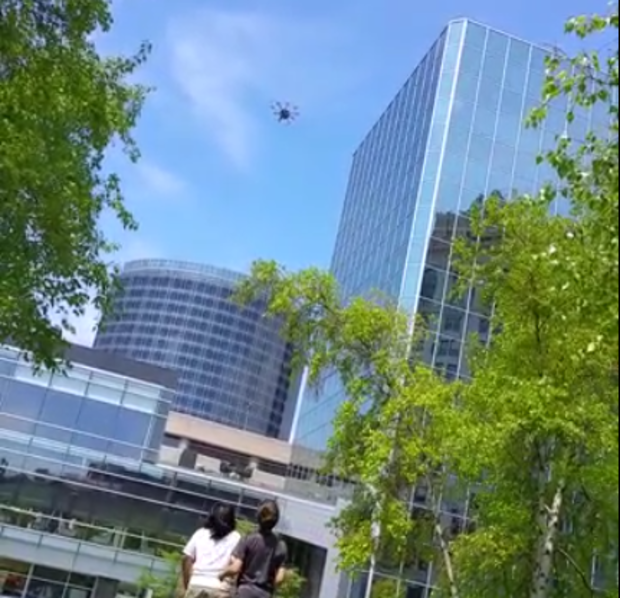 Try telling that to the kids who were shaking bills out of trees yesterday after a mysterious drone operator dropped one Dollar bills on a crowd attending an event at Great Rapid’s Rosa Parks Circle.

According to reports the drone dropped between $50-100 in total, all in one Dollar bills, but people were running to collect the cash as if it was, well… raining money.

It is unknown who was operating the drone, but Melvin Blohm of Mlive happened to be there and he believes it was being operated from the roof of the JW Marriot hotel.

“I saw two people on top of the JW walking toward the direction of where the drone was turning. It appeared that they were controlling it”, he said.

Hotel officials, however, told Mlive they didn’t know about any promotions or drone flights scheduled to take place on their roof.

Local police, perhaps somewhat surprisingly, did not speak out against the drone operator, but did say they’d like to be informed in advance should this happen again.

“In a situation like this, it’s obviously fun for everyone involved, especially the kids that are out there,” Terry Dixon of Great Rapids Police Department told Fox 17. “There is money dropping from the sky, and how often does that happen?”

“The problem is that it could become a safety hazard for the kids or the youth that are running to get the money”, added Dixon; “They could be crossing a roadway and inadvertently be struck by a car or something like that”.

Fox 17’s Christian Frank was also on location, due to the Picnic in the Park event that was taking place at the time, and claims he saw Rob Bliss walk past just a couple of minutes prior to the dronation (drone donation, get it?).

Bliss is the man behind several viral videos so he may very well be related to this somehow, but considering the fact that he lives in Great Rapids; it could just be a coincidence.

Bliss did not respond to Fox 17’s call or Facebook inquiry about the event and his possible connection to it.

Vision AI is just as stupid as real people. This isn’t a crowd of people at a concert

Guide numbers explained – the maths behind the mystery