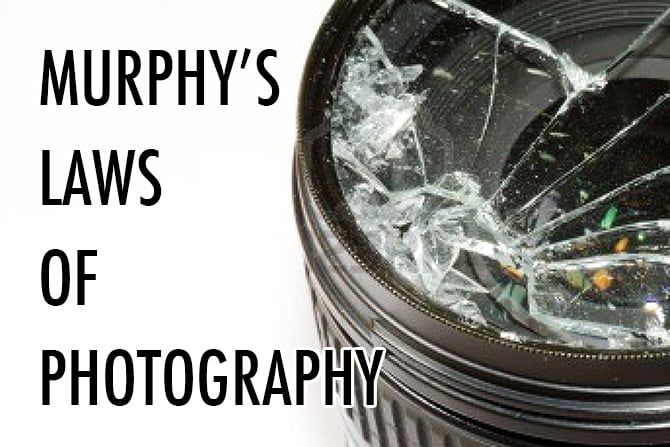 Murphy’s Law: The inexplicable phenomenon of a fickle, spiteful universe which ensures that whatever can go wrong will go wrong. Let’s also not forget its well-known corollary: The higher the stakes, the greater the fall. Nobody seems to have a truly definitive handle on the history of the term, although its sentiment was expressed in print long before Murphy’s name was attached to it some time around 1952. What I think we can all agree on, though, is that when Murphy comes for you you’re screwed. Plain and simple.

Yeah…I’m in that kind of mood.

The universe seems to be taking more than its fair share of bites out of my backside these days, to the extent that I can’t help but wonder if Mr. Murphy is giving the rest of the world a short break for the summer. Either way, you’ll often find him lurking around the outer fringe of your photo shoots, quietly laying the groundwork for his mayhem. You can’t stop him from showing up, but knowing he’s there may be enough to help make sure you’re prepared for when he decides it’s time to firmly plant himself right smack in the middle of your best laid plans.

1. If the test shots go perfectly, the real shoot will be a disaster.

2. The greater your excitement about a shoot, the greater the chance that something will go exceptionally wrong.

3. Success happens quietly when nobody is looking. Failure blasts the door off its hinges when the client is watching.

4. You really only need a tripod when you don’t have one with you.

5. The smoother the shoot goes, the greater likelihood that the card will be lost, corrupted, or stolen by werewolves.

6. The best photo ops of animals and children only happen when two very specific cosmic conditions are met– they’re ready and you’re not.

7. Perfect weather lasts only as long as it takes for you to set up the shot.

8. Perfect weather will return as soon as you finish packing up your gear and drive away.

9. The one thing you absolutely, positively MUST have on your shoot will be the one thing you either forgot to bring or is in short supply (e.g., batteries, memory cards, the aforementioned tripod, etc.).

10. The lens you drop will always be the one you could only afford because you stopped eating for six or eight months.

11. You will never drop this lens on a soft, pillowy surface.

12. Long-life batteries actually laugh at you when they run out. Seriously.

13. The one time you leave the camera at home will definitely be the time you miss the shot of a lifetime. Bringing the camera with you will ensure that nothing happens.

14. The lens currently attached to your camera will never be the lens you need for the first shot.

15. If you are the passenger in a plane, train, bus, truck, automobile, or any other mode of transport, the most stunning scene you’ve ever witnessed in your life will be on the other side.

16. You spent weeks, months, years– maybe even decades– searching the world and your soul for the perfect expression of your photographic vision. You practiced. You studied. You tried, failed, and tried again. You found a mentor. You honed your craft. You allowed your camera to become a true extension of both your body and your mind. The guy who just beat you in a photo contest did it in three seconds with his iPhone.

Am I exaggerating? Perhaps, but just a little. Regardless of whether it’s just you and your camera exploring the great outdoors, or a massive commercial shoot with a huge crew, Mr. Murphy is out there somewhere, biding his time, waiting for just the right moment to throw his gasoline on your open flame. Knowing he’s stalking you is more than half the battle. When he sees you’re ready for him he might just do you a favor and swing by my house instead. Again.

How cubes react to the laws of light

How Photoshop is used to accommodate Middle East’s modesty laws