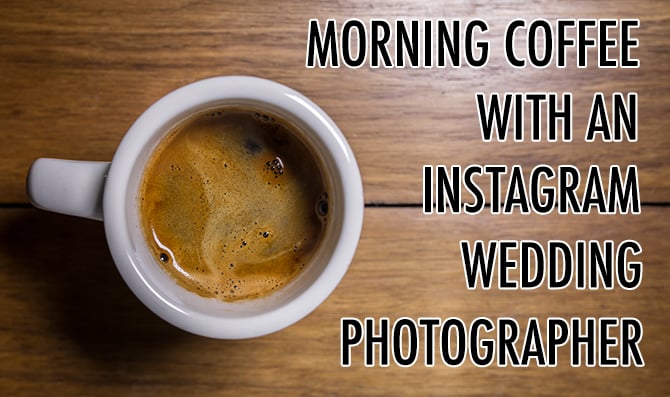 I’m not entirely sure, but it is quite possible that I witnessed a sign of the rapidly approaching Apocalypse this morning. There was no plague of locusts descending from the heavens. No fire. No brimstone. The earth continued rotating on its axis just fine. I’m sure nobody else even noticed. Regardless of its subtlety, it still came at me out of nowhere like a brick to the side of the head.

Personally, I’ve never seen the appeal of conducting business at Starbucks. Between the noise, tripping over a dozen or so laptop cords, the person next to you practically sitting in your lap, and the fact that I don’t even like coffee, it’s never struck me as a locale all that conducive to getting work done or transacting business. But there I was, at my client’s insistence, to deliver her wedding album. We’d been talking for a bit, when suddenly…

“Excuse me– I don’t meant to interrupt, but…

are you a wedding photographer?” I confirmed that I was– as well as other types of photography– and politely tried getting back to my conversation.

“Me too!” came the excited reply. “Of course, I’m a more modern kind of wedding photographer.”

Here we go. Despite the voice in my head screaming at decibel levels I’ve never experienced before, pleading with me to leave it alone, begging me to walk away, I just couldn’t help myself.

“What do you mean by ‘more modern?'” I ask, regretting it even as the words were leaving my mouth.

My client and I were done. I could have left. Still ignoring the shrieking sirens in my head, however, I turned to the hipster with the silly hat beside me and plunged deeper down the rabbit hole. I had to know more.

As it turns out, “Kevin’s” two iPhones are the only cameras he owns. He’s never touched a DSLR. He’s never shot a roll of film. Doesn’t know what a light meter is or what it does. He does have a point-and-shoot (“A Canon or Nikon something or other,”) but feels that it’s just too complicated and slows him down. I’m sitting there, trying like hell not to judge, but I just can’t help myself. My only hope is to keep my disdain for what I’ve just heard to myself, and not channel my inner Samuel L. Jackson.

Not the same old debates

Let me clear about something– this is not about the age-old debate over who is and who is not a “professional” photographer. I know that everyone has their own definition of the term, and I’m okay with that. This is also not about the Canon-Nikon wars, the DSLR-mirrorless skirmishes, or even the battles over “the best” camera for the job. To me, this entire overly caffeinated encounter boiled down to the question of whether Kevin really is or isn’t a photographer– professional, wedding, or otherwise. The bigger problem, however, was when I realized that my knee-jerk reaction to Kevin’s niche and lack of “real photography” experience was in direct conflict with some of my long-held beliefs about photography.

I’m a firm believer in the adage that “It’s not about the gear. It’s about the results.” I have a 36″ x 12″ print hanging in my living room that came off my phone. I’ve embraced Instagram right alongside the millions of other retro-filtering, dinner-making, cloud-watching, sunset-searching users in the world. But there’s a part of me that holds onto the fact that I have years of “real photography” experience under my belt. Surely that counts for something, right? I mean, what’s Kevin ever done other than point and tap? I’m not being a snob. At least I’m trying to not be a snob. While Kevin’s target client and my target client are totally different people, I can’t help but feel that a small part of what makes photography so special to me has been lost to Kevin and his phone-tapping minions.

Time to take off the filters?

To be clear, I don’t begrudge Kevin his “specialty.” Okay…maybe just a little. But I get it. Digital photography changed everything– maybe a little too much. Obviously, professional-grade cameras and lenses are a big expense, but the advent of digital sent the overhead for professional photography plummeting. For the most part, I believe that to be a good thing. I don’t know if I would have had the guts or drive to leave my career as an attorney behind for photography ten years ago if it had required more of an investment than what I had to spare at the time. The fact remains, however, that I took the time to learn the elements of exposure and how they relate to each other. I spent years learning how light behaves and how to bend it to my needs. I experimented with composition. Studied the work that came before me. Got inspired. Failed. Succeeded. Failed again. Found my voice.

I think the reason I’m okay with filtering my photos from time to time is that I know I can create good images without the filters. I don’t need the crutch. One of the points I try making with my students is that the best Photoshop is the Photoshop you don’t even notice. I want them to use it as a tool, not a crutch. I think the same thing applies to the millions of app-ified photos filling their ever-increasing corner of the internet every day. I honestly don’t think it’s too much to ask that people throw down their crutches once in a while and show that they can take a meaningful image without slapping Amaro, Hefe, Hudson, Sierra, or Valencia on top of it first. Where are we when my first reaction to a photo is, “That looks like X-Pro II,” and not, “Wow- great shot!”?

And maybe that’s analysis I’ve been looking for. It’s not a question of pro vs. non-pro. Anybody can make money taking photographs. It’s not a question of the gear, because a good photographer can create solid images with a throw-away film camera and a flashlight. So, maybe it boils down to WHY someone captures their images in a certain way. Kevin doesn’t use an iPhone for his photography because it’s the camera he has with him all the time. He doesn’t use it because he’s stretching himself creatively, or because he’s looking to introduce a new facet to his style. He’s using it because he’s made a conscious choice to limit himself.

Kevin takes pictures. His “primary camera” is an iPhone 5 and his “backup” is a 4s. I suppose that makes him a photographer of sorts, so why am I so appalled that someone is theoretically making at least part of a living by shooting weddings exclusively with an iPhone and processing them exclusively with Instagram?

Hell if I know. What I do know is that I need to stay away from Starbucks.

Photo Credit: Simon Pollock— the most caffeinated photographer I know.

Inspiration & Risk: Do You Know Why You Wake Up In The Morning?