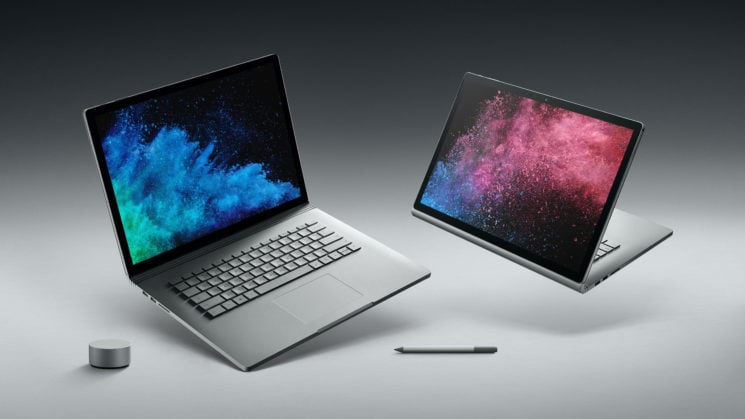 Ever since I first got my hands on an iPad, I haven’t touched my laptop. It’s sat in a box under the bed for about the past 6 or 7 years. I do all my serious work on desktops. I have considered picking up a tablet/laptop hybrid type deal a couple of times, though. But when hearing reports of how badly most suck for video editing work, I abandoned the idea.

Now, though, Microsoft’s newly announced Surface Book 2 looks like it might finally give me a reason to look at laptops again. Especially now it comes with an Nvidia GPU, up to 16GB RAM, 1TB SSD, an 8th generation i7 quad core processor and up to 17 hours of battery life

The Surface Book 2 comes in two sizes. One with a 13″ screen and one with a 15″. The larger of the two boasting a higher pixel density and resolution than the 15″ MacBook Pro. Both of them offer 10 point touchscreen, and are compatible with the Surface Pen and Surface Dial.

And it looks just as sexy on the outside as it does inside.

Although it’s definitely a very creative-friendly piece of kit, that doesn’t seem to be the primary target market. Instead, Microsoft are appealing to a much wider audience. Business users, gamers and creatives. Personally I think it’s a bit overkill for most general business uses. Even for gaming I think I’d rather have a desktop with multiple displays and a full size keyboard. But for on-the-go photo and video editing, it looks ideal.

The Surface Book 2 boasts an amazing battery life of up to 17 hours of video playback, too. How much this will go down to with some intense editing is anybody’s guess. But it’s way beyond the “up to 10 hours” of the new MacBook Pro. They’re also extremely light, with the 15″ version weighing 4.2lbs and the 13″ version at a mere 3.38lbs.

It seems Microsoft have been working rather closely with Adobe, too, to enhance the creative experience. On the Windows blog, Microsoft say…

From the early days of Surface Pro to the launch of the original Surface Book, we’ve had incredible feedback from photographers and artists who loved the ability to shoot tethered or draw on a super portable device that could also run Adobe Creative Cloud desktop applications. The power of Surface Book 2 will help artists and professionals across the creative spectrum take their work to the next level.

More power means faster renders and effects so you can make quick edits and decisions to get you to your finished work. And a deeper partnership with Adobe means even better integration between Surface Book 2 and the Adobe Creative Cloud, including new Surface Dial functionality coming to Photoshop to keep you in your flow and let you easily access and modify your most frequently used brush settings.

You can find out more about the Surface Book 2 on the Microsoft Website and the Windows Blog.

I’d pretty much given up on a portable editing system for now. I did consider finally just taking the plunge with a MacBook. But that AMD chipset always put me off. I was going to just build a new desktop editing system and not worry about editing on the move. Now, though, I think I’m going to have to rethink that plan.