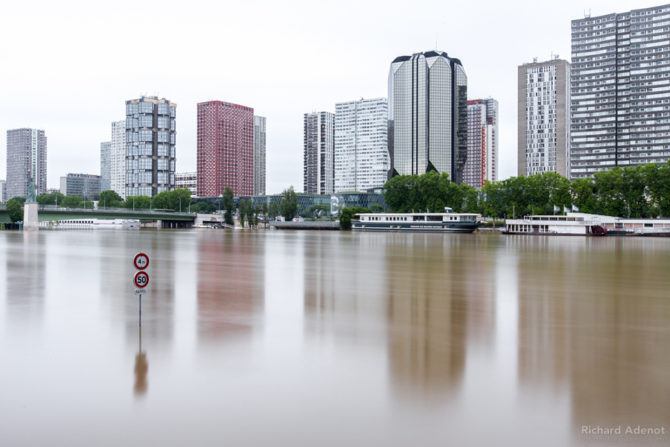 There used to be a road here!

A few days ago, we had a crazy flood in Paris. The Seine rose by a whopping 6.10m (20 feet for you, imperial friends), overflowing the banks, depriving people of electricity, and flooding buildings, public transports, and businesses.

It was a rather destructive flood, especially for cities outside of Paris where entire towns, as I am writing this, are still chest-deep underwater. 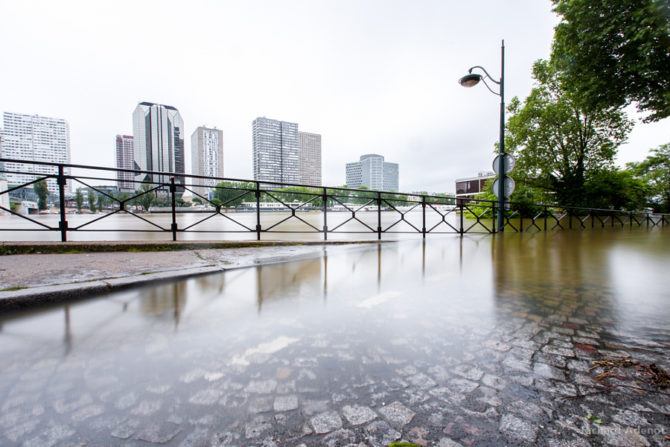 While taking the above long exposure shot, the local news came by, and I ended up as part of the scene on the daily live news on a major French channel (Canal+)

An event like this is pretty rare, the last time the Seine got this high was more than 30 years ago, and so yes, it is exciting to experience it but was for me also quite troublesome. You see, I live right next to the Seine; a few extra centimeters of water, and I too would have been stuck at home with my wife and toddler. 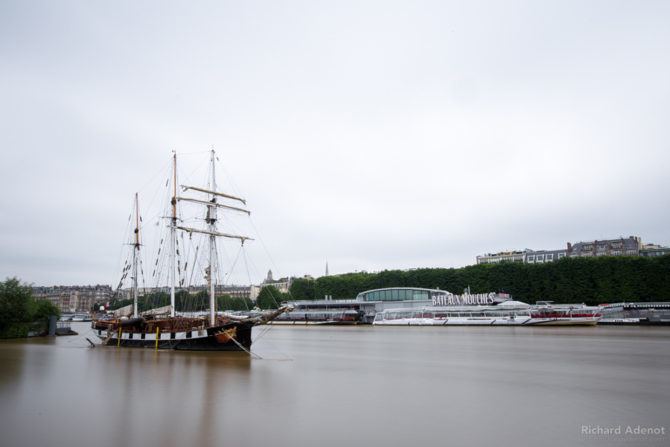 A friend had told me about this boat, I had to see it for myself. I wonder how it even gets under bridges when the city is not flooded.

Tuning in to the news of reliable sources sure was helpful, but media doesn’t always know everything. And so when you see the city installing flood gates at many strategic points and bricking windows of public buildings, your brain starts going into safety and survival mode. At some point you start thinking as to what to do- gather supplies or trust the news and see how the situation evolves? 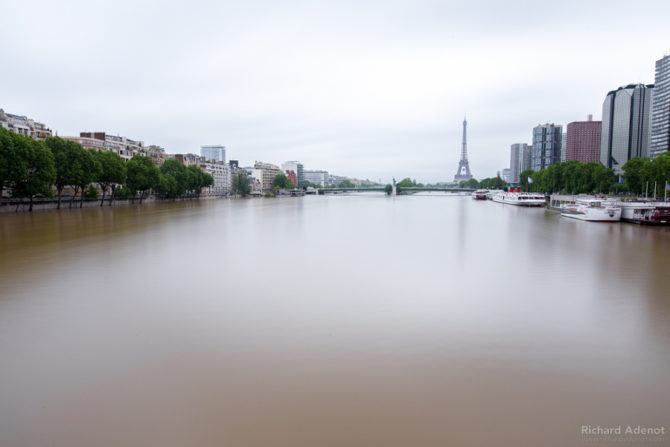 The Seine felt twice as wide as usual, it was quite the sight.

Once the situation had stabilised, I wanted to document it and not wait another 30 years or so for a similar situation. So I went out with one goal in mind, documenting the flood, while trying not to get distracted by the gorgeous architecture of the city. 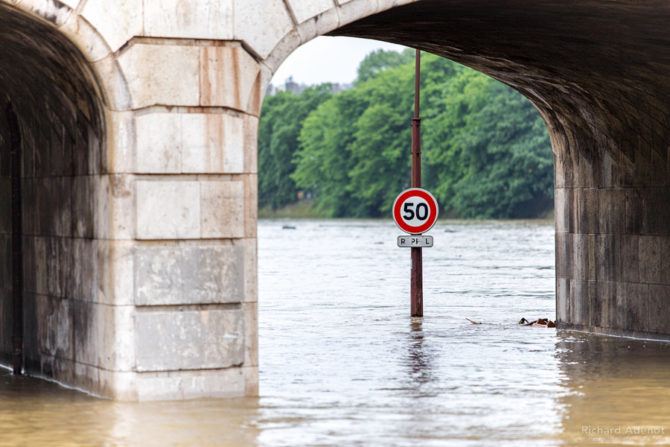 It was quite amusing to see the speed limit sign with no road to belong to.

One of the key elements for me and this photojournalism was doing my homework.
By that I mean finding out what was happening and where, looking at feeds on twitter, seeing what other photographers are doing and where, seeing where some failed and where other succeed and trying to understand why.

Another important aspect was location scouting. The flood was a slow-going process and not yet at it’s peak, so I had time to plan and made use of it. Prior to taking my gear out, I spent an hour by bike and on foot, went around the the Western part of Paris (Eiffel Tower, Statue of Liberty, etc…) took pics with my phone of locations I liked, and went home to continue online as mentioned in the above paragraph. 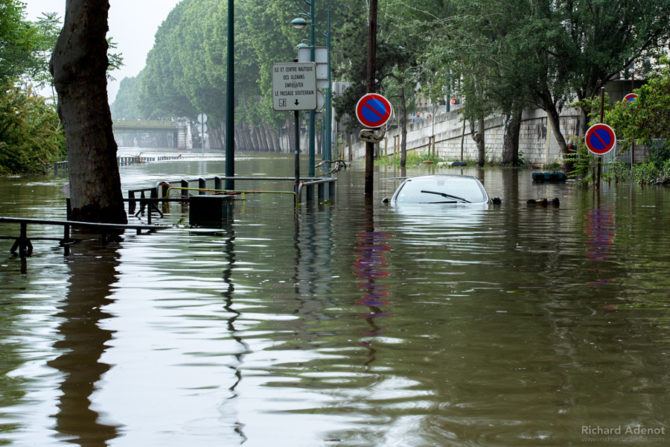 I met the owners of the car who told me they had to go and smash the windows to let water in for the car not to float away and to make sure it would stay put. As you can see on the bark of the screen left tree, the water had started going down. The day prior, the car could barely be seen.

Not only did that allow me to find exquisite spots and angles to take pictures at, it also allowed me to get in the flow- pun intended- and get that creative juice going.

That said, once you’re out and have done your homework, feel free to explore and loosen up, wander around… there might be a shot nearby you might miss otherwise.

Know though, that the longer you wait, the more likely local law enforcements will seal off potential dangerous areas to the population. So if you want prime shots, act quickly, but venture at your own risk. 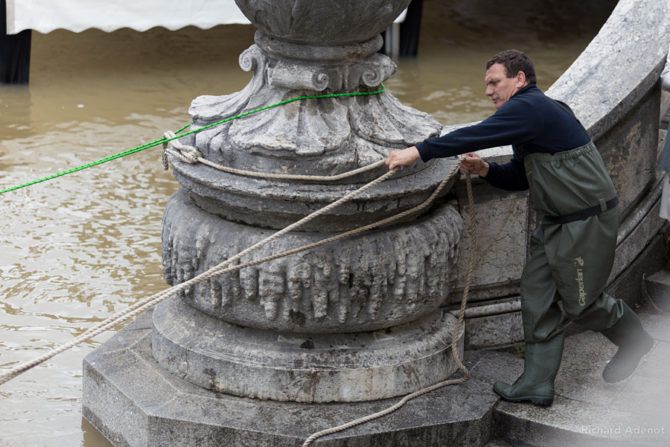 Boat owners were trying to tie their boats to whatever they could. In this case, the stone stair ramp.

You should also check the weather forecast. It was going to be an overcast weekend with consistent lighting due to clouds and with rain here and there, so I planned my excursions when no rain was scheduled. Had it rained, I would have been careful about my gear. The body and lenses I use are weatherproof, so it would have most likely been fine. An umbrella could have done the trick if need be. Some bags come with a waterproof cover to prevent your gear from getting wet. The only real problem would have been falling in the water, for obvious reasons :) 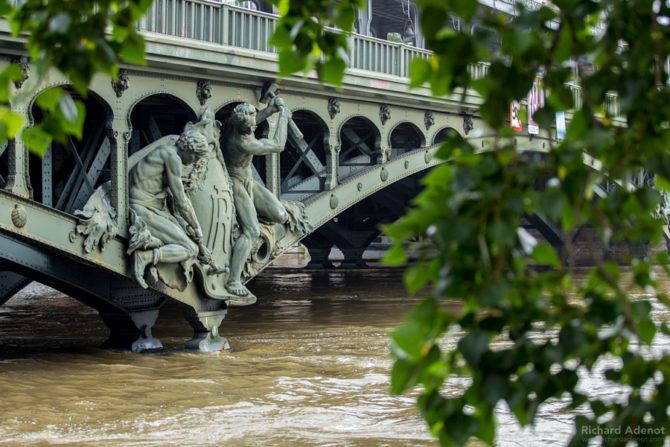 It almost felt as the statues were desperately trying to hammer the water down, with little success. See the brick wall in the back? You can under normal circumstances walk there freely.

Finally, you hear this often but usually forget, bring water and snacks! I walked 30 kilometers over the weekend for these shots, and 20 of them were on the same day. The last thing you want is dehydration and hypoglycemia. If the disaster takes place in a city, you could always stop somewhere, but it’s less precious time behind the camera. 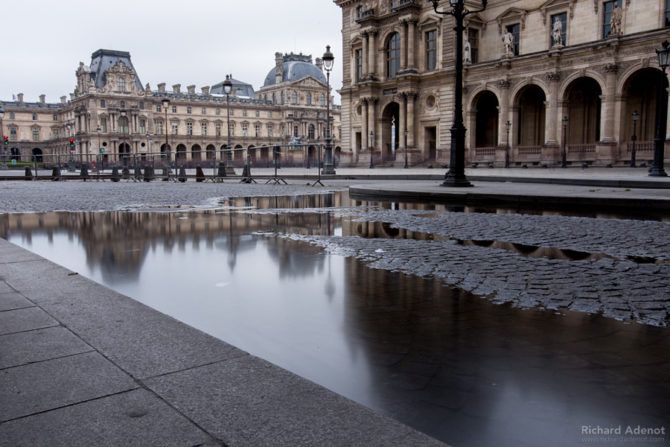 The Louvre had closed their doors over the weekend and moved more than 150,000 valuable items to an upper level as the water could come from the ground and walls that would be at the same level as the Seine.

I really hope this guide has been helpful. If you ever are in a situation where nature goes nuts keep in mind though, that it is mother nature we are talking about, avoid putting yourself in unnecessary danger in unpredictable environments- that picture may not be worth it.

if you want to see the full album, you can find it here: bit.ly/1PcJ0xP

By the way, some of you might have read my previous article “Available Vs ‘Available’ Light: Understanding Off-Camera Flash”. Unfortunately my grandfather seen in the pictures passed earlier this year. I am happy to have taken and shared a photograph that, unlike him, stayed behind. Photography is hard work, but make sure to give back when you can. 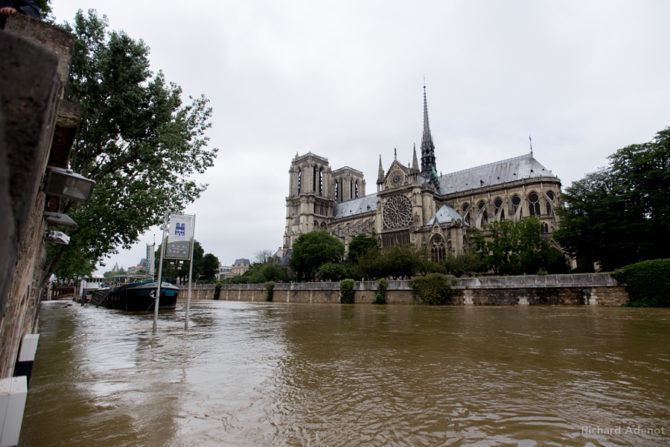 Even Notre Dame had closed it doors as water had found its way into a room containing a power transformer.

Richard Adenot is a Character Effects Supervisor at Illumination MacGuff, the company behind the “Despicable Me” franchise, “The Minions Movie” and the soon-to-be-released “The Secret Life of Pets”.

He also owns a photography business in Paris and is available for both indoor and outdoor portraits, holiday photography, or photojournalism of bigger events, such as weddings or other corporate events.

BTS: Lost In The Flood By Tomer Jacobson