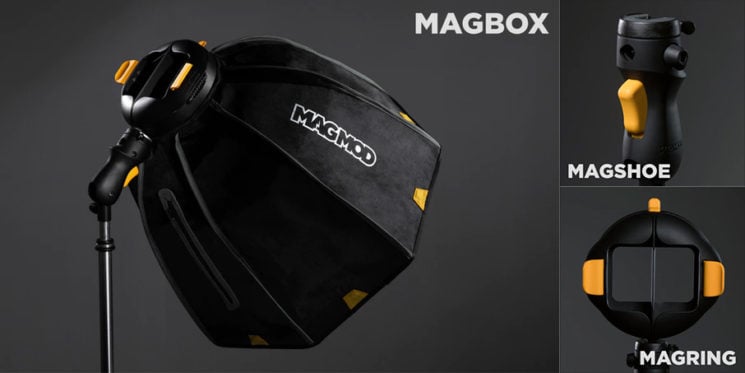 Just when we thought softboxes had been designed and redesigned to death, MagMod comes along to set the record straight. Today the company has introduced the world to their new “revolutionary” MagBox magnetic softbox. Designed primarily for speedlights, it actually looks pretty cool – and quite different to softboxes we’ve seen before.

The product is being funded through Kickstarter where they’ve already annihilated their $100,000 goal in just a couple of hours. It currently sits at $187K, with almost 2 months left to go. I think it’s safe to say there’s a lot of excited MagMod customers out there.-

Along with the MagBox, they’re also announcing the new MagShoe and MagRing. The MagShoe replaces all those clunky umbrella brackets with an easy to use grip-release system. The MagRing, designed to work with the MagBox, allows you to mount a pair of speedlights side-by-side, doubling your light output for an extra stop of power.

Now, they say in the Kickstarter video that this allows you to get “almost the same power as a studio strobe”. Well, yeah, perhaps a fairly weak studio strobe. I’d be surprised if a pair of speedlights in one of these could match even a single Godox AD200 bare bulb head in a regular softbox, and it certainly wouldn’t be able to keep up with something like an AD600 Pro.

A few folks on Facebook have also commented on a couple of other potential issues they see with the new MagBox system, though. While being able to add an extra speedlight is certainly handy, strobe comparison aside, there is the issue of not being able to mount a diffusion dome in there (which, yes, would suck even more power).

Typically, to fill a softbox with a speedlight, especially one that doesn’t have an inner diffuser (yes, that was another complaint) as evenly as possible, you need to pop the little white diffusion dome on it. This way, the light comes out at all angles, more like a bare bulb strobe, filling the softbox and bouncing all the light forward fairly evenly.

So, while diffusion domes do eat up a stop or so of power, they allow for a more even spread of light on the front diffusion material of the box and a more pleasing overall look. Without them, the Fresnel head of a speedlight means that the light is basically projected straight forward. And, again, there’s no inner diffusion panel, so I’m curious to see how well it will prevent hotspots gathering at the centre of the diffusion material in the real world.

But despite those misgivings, I do still think it’s a very cool idea. So, let’s keep looking.

Once you mount the MagBox to the MagRing, there’s a place inside to insert gels. The gel covers both speedlights, so there’s no risk of pure white light leaking through or seeing weird colour shifts. You should get the exact colour you expect.

The MagBox itself attaches to the MagRing with magnets. With a softbox of this size (a 24″ octabox), the number of magnets used here should do fairly well to deal with the weight, even in a bit of a breeze. As well as the new MagRing, there’s a regular speed ring available, allowing you to use the MagBox with regular studio strobes (negating the whole diffusion dome issue mentioned above). The regular speedring is available in Bowens, Elinchrom, PCB or Profoto flavours.

I do wonder, though, how large they may be able to go with this magnetic box design in the future. A 24″ octa isn’t exactly large, and the last thing you want is to have a big box mounted on a strobe when the magnets give way to see the box shear your flash tube clean off.

I’m looking forward to seeing what people make of it in the real world once it’s released. I won’t be getting one myself, but that’s mostly down to the fact that I basically gave up on speedlights years ago. For me, the portability and power of the Godox AD360II beats speedlights on location hands down. I still own a couple of Nikon SB-900s and a handful of Godox TT600 and Yongnuo YN560III speedlights, but they rarely see any use anymore. I should probably sell them.

If you’re a speedlight fanatic, though, the MagBox looks like it could be an excellent way to go.

For the prices of everything, you’ll want to head on over to the Kickstarter page and see what’s left. But right now, the basic MagShoe costs $49 for one or $90 for two with the MagBox kit starting at $199 without the MagShoe or $249 with.

Side note: MagMod seem to have picked the clumsiest people ever for their Kickstarter video. Reminds me of this…

Is there an agency to find such actors?

27th June, 2018 Update: MagMod got in touch with us to point out a GIF on the Kickstarter campaign that had apparently failed to load the first time I went to view it. It looks like the speedlight diffusion domes mentioned above aren’t going to be an issue. In short, MagMod told DIYP that the way the MagBox has been designed presents a nice even spread of light from a pair of speedlights onto the front diffusion panel without needing either diffusion domes or a second inner baffle.

It does indeed appear to be pretty even illumination when compared to the alternatives. But without the requirement for a diffusion dome or inner baffle, you should see more light come out the front vs the competition. Sounds like a win for the MagBox.