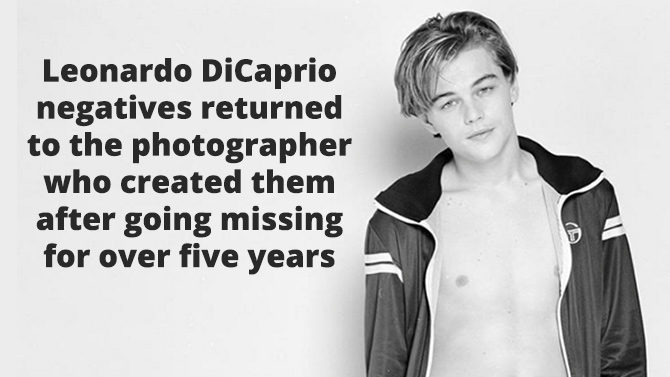 Stalking garage sales, flea markets and estate auctions looking for long forgotten rolls of film seems to have become a very popular hobby in the past few years.  It brought us the work of Vivian Maier, led to the discovery of previously unknown Ansel Adams glass plates, and showed us some amazing photographs shot during World War II.

Most recently, thanks to photographers Matthew Salacuse, Henry Leutwyler and Stephane Sednaoui, lost negatives from a shoot with a young Leonardo DiCaprio were returned to very grateful filmmaker Alexi Tan after going missing for over five years.

How Tan lost his archive negatives is a sad tale which would haunt many a photographer, and would act a constant reminder for us to stay on top of things, especially when it comes to matters of a financial nature.

A number of years ago, while Tan was out of the country directing a film, a credit card with which he paid for a storage facility in Manhattan expired.  When the payments lapsed, the company who maintained the storage facility auctioned off the contents of Tan’s storage unit, sending his archive of negatives to the highest bidder.

Faced with a similar situation, many of us would think that our images would be gone forever.  Accidentally destroyed through improper storage by somebody who doesn’t understand their value or worse, simply discarded in the trash.

At about the same time, Henry Leutwyler also happened to stumble across some of Tan’s work at the same flea market.  After having purchased what he found he returned them to Tan via his friend Stephane Sednaoui.  While Leutwyler had recovered prints from this shoot, the negatives were missing.

In celebration, Salacuse posts one of the DiCaprio images to the Negative Collection Instagram feed, from which he sells limited edition prints from found negatives, where Leutwyler recognised it.

These were the negatives from the prints Leutwyler had picked up.  They, along with another shoot of hip-hop group Wu-Tang Clan, were then passed along to Leutwyler, passing them in turn to Tan, their original creator.

These are the moments that are special to Salacuse.  Having started Negative Collection about 10 years ago after recognising that others might share his interest in film photography and images that had been lost or thrown out, it’s always been his hope that he is able to reunite some of the works with the photographers who created them.

While many of us are unlikely to make discoveries such as these, or be reunited with films we lost long ago, the journey that one’s work can occasionally take is an interesting one.

It’s also interesting to see that the modern digital world in which we live is able to extend its services to film shooters every now and then.

You can find out more about Salacuse’s project on the Negative Collection website.