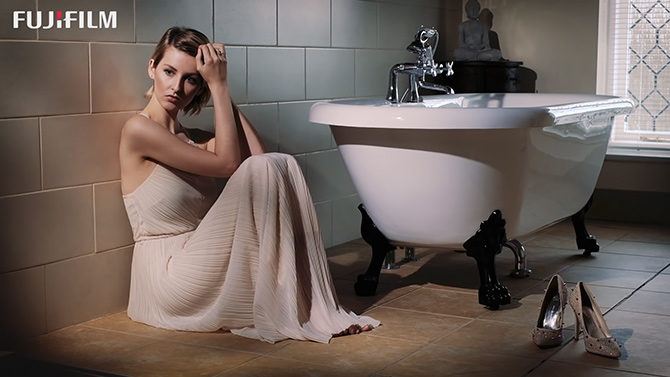 A bathroom might seem an odd place to make a portrait, but then most of our bathrooms aren’t as appealing as this one.

In this video from Fuji X-Photographer Damien Lovegrove, we see how we can light such a scene using continuous LED lights, and cookies to help break up and scatter the light for a more natural appearance.

Despite the advances that have been made with LED lights, many still see them as underpowered when compared to flash, but the video highlights one huge benefit to using a continuous light.

After adding a cookie (or “cocoluris”), rotating the light just a few degrees gives a very different pattern of light heading in the model’s direction.

The ability to see exactly how your light is going to fall on the scene before you take the shot can be absolutely invaluable for a shot like this.  It saves a lot of time that you don’t have to waste making test shots trying to figure out exactly what a flash is going to do.

The comparison also shows the nice interplay between the LED and the ambient light in the room coming in through the window.

Mixing light sources in this way, as long as the colour temperature matches, is a great way to augment and enhance the existing light while still giving a natural look.

You don’t always have to completely overpower and obliterate the ambient light with flash.

Do you use LED lights in your shoots?  What other tips do you have for mixing LEDs with ambient light?  Let us know in the comments.

Turn your bathroom into a natural light softbox for amazing portraits

Follow these four tips when mixing natural light with strobes