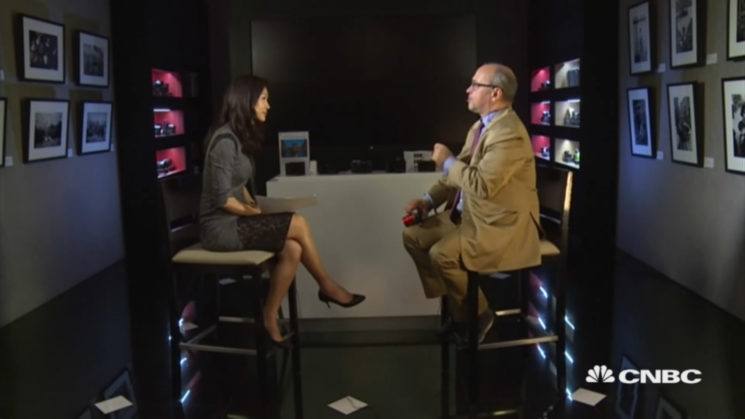 Last year’s collaboration with Huawei to produce the dual-lens camera Huawei P9 Smartphone was met with mixed responses. Some said it was just a gimmick, while others thought it was the best thing to happen to mobile photography. Although its release was not without a little controversy. And then a little more. But I know a number of people who own a P9 and absolutely love it.

It seems Leica, or at least Leica Chairman, Andreas Kaufmann, isn’t quite as pleased with it. In an interview with CBNC, Kaufmann said that it was a “personal dream” to reinvent the smartphone. He wants a “true Leica phone”. He isn’t quite sure if it’s a reality for the company, but it is his personal dream.

The whole 14 minute interview is an interesting, amusing and insightful discussion. Kaufmann talks about his first introduction to Leica, thanks to a former fiancée. When you hear his response to her, you may understand why “former”. But he did eventually come around.

When Kaufmann and his two brothers bought into the Leica in 2004, they were a dying company. It’s thanks to him that Leica developed a digital version of their M camera. This completely turned the company around, and in 2009 the company became profitable again. Ultimately leading to Kaufmann being awarded World Entrepreneur of the Year in 2014.

He says that the transition wasn’t too difficult. The ideas were already in the company. That Leica had already produced their first digital cameras in 1996. Although they held off a release while waiting for sensor technology to meet their standards. This was the first digital revolution.

Kaufmann believes that smartphones are the second digital revolution. He spoke a little on Leica’s collaboration with Huawei for the P9, and where it may go in the future, although he didn’t let out too much.

Now it gets a little bit confidential, but you could think of this… Are two camera systems enough for a smartphone? And that could give you a hint into the future.

This does suggest that Leica may be looking into something along the lines of the Light L16, which is now finally shipping. For his personal thoughts, though, he had this to say.

I have a few dreams. I’m not sure whether the company can do that. One dream would be, my personal dream, a true Leica phone.

The idea of a phone fully developed by a camera manufacturer, especially one with Leica’s heritage, is an intriguing idea. But it would be an incredible challenge.

The phone nowadays is not really fit really for photography… It’s used as a camera, it’s used as a video camera, but it’s not built that way and I think there’s still a long way to go.

Phones don’t have the ergonomics required to be easily used as a camera. I’ve no doubt that Leica would be able to design a phone more suited to photography, but then how would its ergonomics suit as an actual phone?

It will be interesting to see if this ever does happen.