The entire negative archives of Jacques Lowe – JFK presidential photographer – were stored in a fireproof vault in a bank in the World Trade Center. Lowe’s photos span from Kennedy’s 1958 U.S. Senate re-election campaign through his early years in the White House

Those negatives were lost on 9/11. It was a trove of about 40,000 individual negatives. 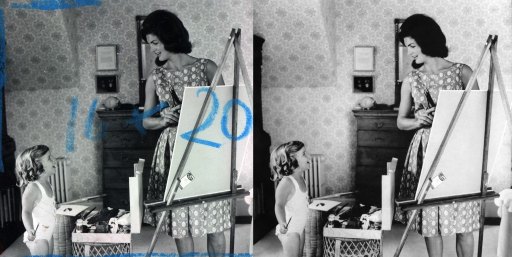 Luckily, Lowe stored about 1,500 contact sheets and prints in his NYC studio and D.C’s Newseum was able to restore about 70 of the photos.

Over 200 photographs were restored from the contact sheets and prints and 70 of them are now displays at the Newseum in the Creating Camelot: The Kennedy Photography of Jacques Lowe exhibit.

This is quite remarkable as each image in the contact sheet is about 1″x1″ so each speck of dust or small scratch becomes huge when enlarged. Also the color range on a printed film is significantly smaller than the range in the negatives.

“The Newseum started the editorial review of the contact sheets back in May 2012 and arranged for the loan of 1500 contact sheets and 100+ prints in August of 2012. A team of seven imaging specialists spent more than 600 hours to digitally capture and restore every single contact sheet and print. The contact sheets were scanned at 400 dpi 200%, producing 150MB TIFF files. #

Interestingly, the harder part in the restoration process was removing the “chalk marks” made by Lowe to indicate images selected for publication or enlargement or had editorial insights.

Creating Camelot: The Kennedy Photography of Jacques Lowe opened in April, 2013 and will close in January of 2014 at the Washington DC’s Newseum.

[Bringing History Back to Life with the Newseum’s Creating Camelot | adobe.com]

Lost Leonardo DiCaprio negatives reunited with the photographer who created them

« Considering A Group Buying Deal? You Might As Well Be Working For Free
Quick Tip: Using 35mm Film With Lomography’s Belair X 6-12 »