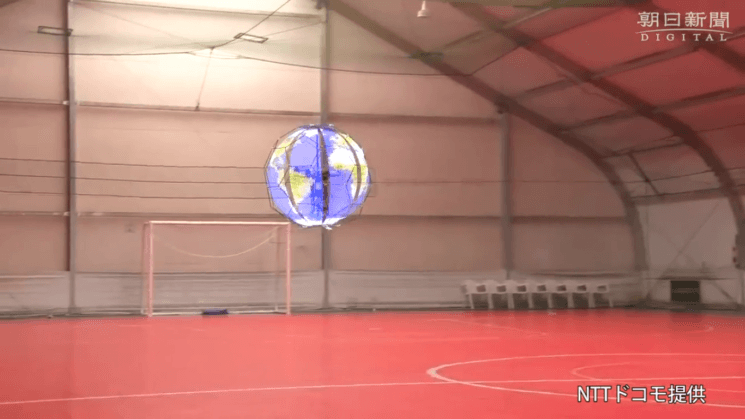 Japanese mobile phone carrier NTT Docomo Inc. has developed a drone that displays spherical images during flight, the first of this kind in the world. In the experimental flight, it displayed spherical images of the Earth or the company’s logo.

The drone has a frame with eight LED-embedded supports. They revolve around the frame’s axis three times per second and create the illusion of an illuminated sphere of images that floats in the air.

The drone weighs around 3.5 kg and projects the images about 75cm in diameter. When the drone takes off, the frame revolves and creates a spherical image that appears to be floating above the ground. From what I can see in the video, it seems very interesting.

The drone is still a prototype, so it can only fly for a few minutes. But the Docomo says it will be possible to extend the flight time in future. They see several possible applications, both for individual flights and as a part of the formation.

According to the company, these drones could be used as a part of a performance at different kinds of shows.  Since they can display videos and letters in addition to images, they also have the potential for advertising. They could make the advertising messages more interesting and appealing to the audience.

Frankly, I hope these will be used for something more than advertising. I find ads annoying in any form, and they would probably be the most annoying if they would fly around me. I can totally picture these drones in concerts or sports events, as a part of the spectacle. What about you? What do you think about these drones, and how do you think they can be used?

« A review of the new Cactus X-TTL cross platform flash trigger firmware with HSS and TTL
This DIY 90mm f/2.8 Petzval lens looks like it came straight off the production line »