The year is 2004, and Nikon has just announced their latest flagship 35mm SLR, the Nikon F6. Matt Granger, who I’m surprised wasn’t wearing a “That Nikon Guy” t-shirt for this, has managed to get his hands on one. So, he’s posted up a review. Strangely, despite the fact that he says it’s 2004, he’s managed to shoot the review in 4K.

Of course, it’s not really 2004. Film isn’t quite dead yet (it does smell a bit funny, though) and the F6 did not go on to destroy the impending oncoming digital storm. But it’s an interesting look at how the F6 was perceived when it was released in 2004, alongside the flagship 4.1MP Nikon D2h DSLR (which wasn’t full frame, it was a DX crop). Although the Nikon F6 is still listed as a current model on the Nikon website and is still available to buy. 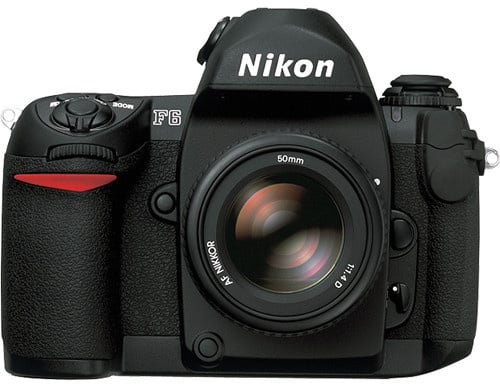 The F6 is also the only 35mm film SLR that supports iTTL and Nikon’s AWL/CLS flash system. This means you can get high speed sync & TTL with Nikon’s modern flashes, same as you can with their AWL/CLS compatible DSLRs (basically, everything except their first generation D-TTL DSLRs). You should even be able to get HSS & TTL with other compatible systems like Godox – I’ve always wanted to try HSS with film.

Back then, the argument for 35mm SLR vs DSLR was as real as DSLR vs Mirrorless is today – that is to say, it existed, but it was a stupid argument. So, while Matt may be 14 years too late with this review, it’s almost like we’ve come full circle. Many of the arguments and conversations I see online today about the dominance of Sony, Fuji and Panasonic mirrorless, how DSLRs are dead, etc. I’ve heard them all before. Film vs digital was no different 14+ years ago.

The only thing that’s really changed is the release cycle. It used to be that Nikon flagships were updated about once every 8 years. Canon went with a slightly more aggressive 5-year cycle to try to push new features sooner. And there used to only be one flagship model at any given time. Looking at what Nikon has called its flagship bodies since the D2h’s release, we can see that release cycle has really shortened down.

The only real anomalies in the above list are the D2x and D3x. These were ultra high resolution (for their time) bodies for very specific tasks. Landscape, portraits, fashion, or anywhere else one might need resolution over speed. But after the 3rd generation, sensors had pretty much all become decent enough resolution for those tasks. Even entry-level Nikons these days, like the D3400 and D5600, are 24mp (the same resolution as the D3x).

It’s interesting how much of the narrative in Matt’s video mirrors (no pun intended) today’s mirrorless debate. And I remember seeing all these arguments first hand back then. I was shooting a Nikon N90s (F90x) and a pair of D100 bodies, lusting after both the F6 and the D2h. My gear lust has settled down a little since then and I’ve settled on an F100 and D800 – for now.

Also interesting are some of the pop culture references from back then, too. The level of other tech in the day, with his fancy new Mabcook G4 with its 933Mhz CPU and insane 256MB of RAM that “only” weights 8lbs. Although, 56K dialup? in 2004? Didn’t everybody have @Home back then?

It’s an amusing watch, especially when you look at what’s happening in the world of cameras today.