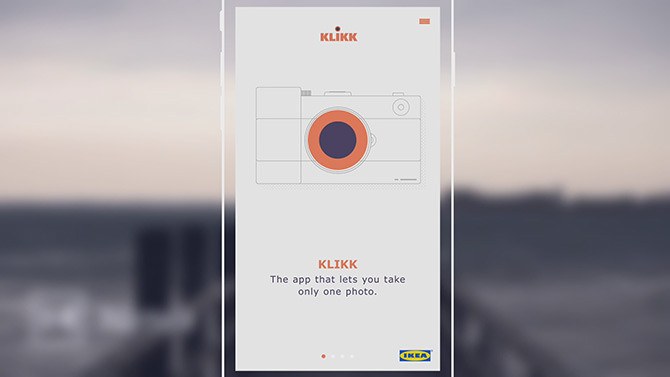 Known around the world for their self-assembly furniture and a range of products you can repurpose for photography, Ikea wants to help you with your photography, by slowing you down and helping you to get the one shot that matters.

Literally, one shot, that’s it.  Titled “Klikk”, the Ikea Belgium app aims to force photographers to think more carefully on the composition, light, and timing of their photographs, rather than firing off a few dozen, picking the best and running it through some crazy filter.

The app, designed by DDB Brussels, was built to promote Ikea’s 2016 Art Collection, a limited run of 11 posters featuring works by such photographers as Rankin, Jill Greenberg, Mandy Barker, Chad Moore, and others.

Each image created with the application, available for both iOS and Android, is submitted into a competition, and one winner will be chosen to become the 12th image in this series, and about a thousand Ikea clients will be able to order the poster for free.

It’s an interesting idea, although DDB has confirmed that the winner won’t be paid for the use of his or her image, which makes us once again question the value of “exposure” (which is usually not very high).

None-the-less, the concept is definitely one that forces us to put more thought into our work.  To slow down, and only hit the shutter when we’re absolutely sure we’re creating the image we want.

The digital revolution certainly offers the option of allowing us to shoot a couple of hundred images in order to create one, but does that make us become better photographers?  Or just turn “lucky” into “inevitable” given enough hits of the button?

Not to mention the fact that with the likes of Photoshop and Affinity Photo, we have pretty much unlimited options with what we can do to our images after they’ve been created by the camera.

If you want to test the principle with something slightly less extreme, why not pick up an old film camera, and just fire off 36 exposures?  Or you could buy a small capacity (and by “small” I’m talking numbers ending in MB, not GB) memory card for your camera, and limit yourself to only what you can fit on that card.

It sounds easy to create 36 shots on a roll of film, given many of today’s digital workflows, but it’s often a lot harder than you think.

Limiting yourself this way is a great method of improving your abilities, and pushing yourself as a photographer, but it can become frustrating.  The only question is whether it’s more or less frustrating than trying to build Ikea furniture.