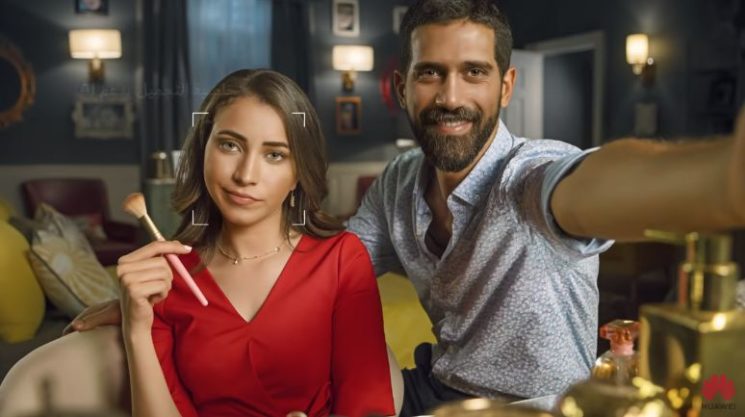 It looks like Huawei didn’t learn anything from their previous mistakes when it comes to deceptive marketing. In the latest advertisement for Nova 3 smartphone, the company has once again passed off a DSLR photo as a photo taken by a smartphone camera. And once again, they got busted.

The ad was published by Huawei Mobile Egypt and it shows a couple taking selfies on several occasions. At one point, the man wants to take a selfie with the woman, and she doesn’t seem up for it as she hasn’t finished putting the makeup on (notice the annoying stereotype here). The man snaps a selfie after all, and Huawei Nova 3’s awesome AI makes the woman look as if she’s wearing perfect makeup.

Unfortunately or Huawei, the actress from the ad Sarah Elshamy posted a few BTS shots from the set. In one of the photos, you can see a photographer shooting the scene with a DSLR on a tripod. And the actor who is “taking the selfie” has his arm outstretched holding… well, thin air. The photo has been removed since then, but of course, someone took screenshots and you can still see the photo circulating on Twitter.

As I mentioned, this isn’t the first time that Huawei messed up with dishonest marketing. Back in 2016, they did pretty much the same thing. They shot a photo on a $4,500 Canon DSLR kit and passed it off as a P9 shot – but they forgot to remove the EXIF data. Whoops! At that time, the company apologized and stated that the photo was shared merely “to inspire their community.”

Samsung was also recently busted for tweeting stock photos to promote the Galaxy A8 front camera. When someone busted them on Twitter, the company admitted that they screwed up and stated that some of the images “express the attitude of their target audience.”

After getting caught faking a smartphone photo in an ad once again, I wonder what Huawei’s explanation will be this time. We have contacted the company for details and clarification, and we will update you if we hear back.

« Here’s how to turn any DSLR into a mirrorless camera
Don’t want to be in this festival’s photographs? Then put a red dot on your head »