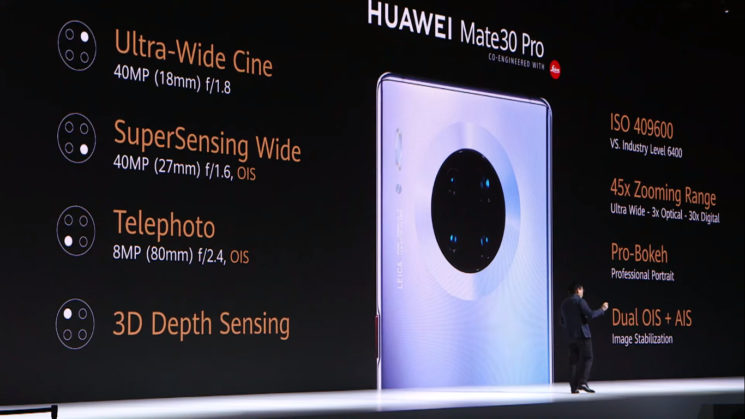 Only days after Apple’s launch of iPhone 11, Huawei has also announced its latest flagship phone. Huawei Mate 30 Pro is now officially out, and its main focus is definitely on the camera capabilities. It’s aimed at smartphone photographers and filmmakers, and other than the quadruple camera, it offers a range of options which help you make the best of your mages.

The Huawei Mate 30 Pro was unveiled today at a launch event in Munich, Germany, along with its budget-friendly version Mate 30. Here’s the full video below if you’re interested:

The new Huawei phone features a 6.53-inch curved OLED ‘Horizon’ screen with a resolution of 2,400 x 1,176 pixels. Just like before, Huawei has teamed up with Leica to make the cameras. There are four rear cameras and a dual front camera, and these are the specs:

The front camera is compatible with a wide range of AR photo and video features, including new gesture-control functionality. We don’t know if it will allow slow-motion selfies, but we do know that Huawei won’t be able to name them “slofies.”

As for the video capabilities, the Mate 30Pro shoots 4K at up to 60 fps, as well a slo-mo 1080p at up to 960 fps and 720p video at up to 7,680 fps. The additional video capabilities include 4K HDR+ timelapse with up to 12-hours of recording, and a real-time “cinematic bokeh” to give your videos a more professional look.

The Mate 30 Pro will be available four colors, plus two vegan leather options: silver, green, purple, and black; plus green and orange.