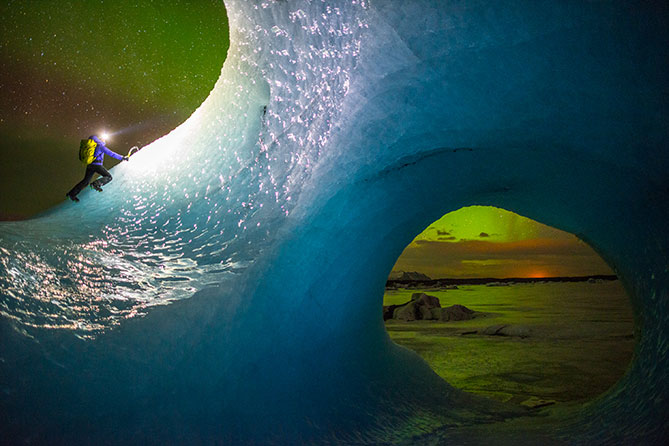 As a professional photographer, Tim Kemple believes it’s his job to capture situations and perspectives that few people would ever see, let alone be able to capture themselves. “In my mind, the best photographs happen in environments and locations where other people would normally want to be inside by a fireplace, or in a warm bed,” says Tim, who recently traveled with SmugMug to Iceland to explore the ice-climbing opportunities on, and inside, Europe’s biggest glacier. “Shooting outside in the cold is a perfect opportunity to capture a time and place that a lot of people aren’t comfortable in.”

If the pursuit of discomfort drives much of Tim’s creativity behind the lens, this adventure photographer has learned a thing or two about shooting in compromising environments.

This photograph of Rahel Schelb, a full-time teacher in Switzerland and part-time professional climber, ascending an iceberg in Iceland with the northern lights flaring in the background, was one of the highlights for Tim. “In a lot of ways, the photography is easy,” he says. “You get out to these beautiful places with talented athletes and you could drop the camera and take a cover-worthy photo. The real trick is to find new ways to capture things that people have never before seen.”

Here’s how Tim took this shot, as well as other tips for surviving an Arctic photo shoot.

“As photographers, our job is to transport people to these other incredible places and show them things that they can’t normally see through their normal human eye, standing on the ground,” says Tim. He accomplishes this goal by thinking about ways to adjust three crucial variables: perspective, time, and lighting.

“The human eye sees at a shutter speed approximately equivalent to 1/24th or 1/30th of a second,” says Tim. “But with a camera you can capture stills that show much longer exposures.” In this photo, Tim dabbles with all three. First, he achieved a perspective from inside the iceberg that most people, without the technical climbing skills, wouldn’t be able to access. He used off-camera lighting to highlight the natural beauty of the ice walls in the foreground. And he used a 3-second shutter speed to balance the natural background light created by the starry sky and glowing northern lights with the climber’s headlamp and lit glacier.

To get a different photo, start by thinking about how you can play with perspective, time, and lighting.

Tim brought several Black Diamond headlamps with variable lighting settings. For this photo, he set the headlamps to the the dimmest setting possible.

“Most people think you need strobes or really bright headlamps for off-camera lighting,” he says. “I use strobes during the day, but at night, I use headlamps on their lowest setting. It makes it much easier to achieve a balanced exposure.”

Start with the End in Mind

Tim had two goals he wanted to achieve with this picture: He wanted to be able to blow it up for large-format prints without significant noise, and get corner-to-corner sharpness. These are tough standards for shooting at night in the Arctic, but it gave Tim a starting point for the technical settings on his camera.

“I started by setting my camera at 1600 ISO because I wanted low noise when printed large,” Tim says. (He concedes that, had he been shooting this image just for digital, he would have felt comfortable pushing the ISO to 3200 or higher—again, start with the end in mind.)

Tim also prefers fixed-focal-length lenses—he shot this picture with a 24mm f/1.4 prime—as they tend to be sharper and faster. However, because Tim wanted to acheive corner-to-corner sharpness, he stopped the aperture down to f/1.8. “Any lens shot wide open is going to start to fall apart a little bit in the corners,” he says. “So when I’m taking the photograph where edge-to-edge sharpness is important, I’m using an aperture that isn’t totally wide open.”

From there, it’s a matter of “trial and error,” says Tim, “to get the shutter speed correct so the image is perfectly exposed. For this photo, it was a 3-second shutter speed.

Discomfort Doesn’t Have to Be Misery

“First of all, just because you’re uncomfortable, doesn’t mean you have to be miserable,” Tim says. “Obviously, wear warm clothing, and bring enough to be prepared for any situation: rain, wind, and snow.” Embracing the situation helps, as does good music and podcasts. Even enjoying the silence of the setting can make a frigid nighttime time-lapse much more enjoyable.

Tim notes that there is no shortage of fantastic liner gloves out there to keep your hands warm while operating your camera. Just make sure you get a pair of gloves with digital fingertips, which will allow you to continue to use your phone’s touch screen or the back screen on your camera.

Charge All Batteries Before

Always charge all your batteries the night before your shoot, and keep them warm in your pockets the day of.

Transitioning between two different environments can wreak havoc on your camera lenses by causing them to fog up. “If I’m shooting outside in the cold,” says Tim,” and I’m coming inside to a warm environment, whether that’s indoors, or inside a car, or even inside a tent, I keep my camera equipment outside in the cold if I know I’ll be going back outside.”

Also, if you know that you’ll have to be making a transition from warm to cold or vice versa, make sure you plan ahead to give your camera equipment enough time to adjust.

If you’re spending the night outside, boil a liter of water, put it in a Nalgene bottle, and then put the bottle inside your sleeping bag with you. “It makes sleeping out under the stars so much more comfortable,” says Tim. “You’ll be warm all night long. It’s awesome.”

SmugMug is a paid photo-sharing website and image hosting service which allows users to upload both HD photos and videos to their SmugMug sites. Launched in 2002,the company offers a toolset which facilitates the selling of digital and print media for amateur and professional photographers. The movie above is a part of  SmugMug Films – Behind-the-lens of SmugMug’s inspiring photographers. This article was also published here and shared with permission.

Watch an adorable wild arctic fox making friends with a photographer
« Cheap LED Lights: What is CRI and does it matter
Gura Gear is Gone; Say Hello To Tamrac G-Elite »