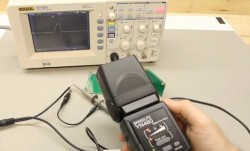 When talking about strobes we usually go for power, one of the first things we ask is what is the GN on the little guy, or how many WS on the big bro. That is usually the questions when you want to light more.

The lower the power is, the faster the pop should be.

While Nikon strobes have this (partial) info on their specs, Canon strobes specs (at least the ones I found) lack this info all together. Wouldn’t it be interesting to see how strobes measure up to those numbers in real life?

That is exactly what Maurice Ribble (from tech photo blog and cameraaxe) thought. So he made a video explaining how to measure that duration with an oscilloscope (warning, geeky equipment required) and tested a Yongnuo 460 against a Canon 580EX II and surprisingly the YN was faster. (there are some doubts raised in an interesting Strobist thread if you are engineering inclined). Video after the jump.

How to quickly match colours for fast composites in Photoshop