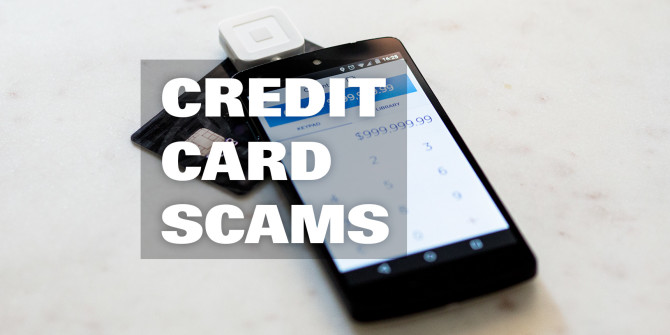 It appears that there’s a credit card scam targeting wedding photographers making its way round the Internet. Over the past several months, I’ve been contacted by a number of unimaginably eager clients-to-be requesting to reserve my wedding photography services. These messages share several common elements:

These elements have been the common denominator in almost every single scam attempt I’ve encountered. With that said, it’s important to understand that without an actual confirmation, you can’t be certain that you are not engaging with a possible client, so it’s best to maintain a level of professionalism while disengaging from the conversation. 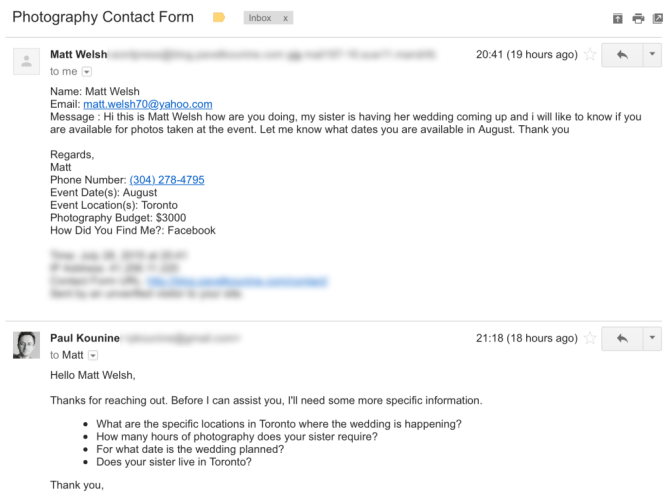 The initial email has some immediate problems that should raise eyebrows: 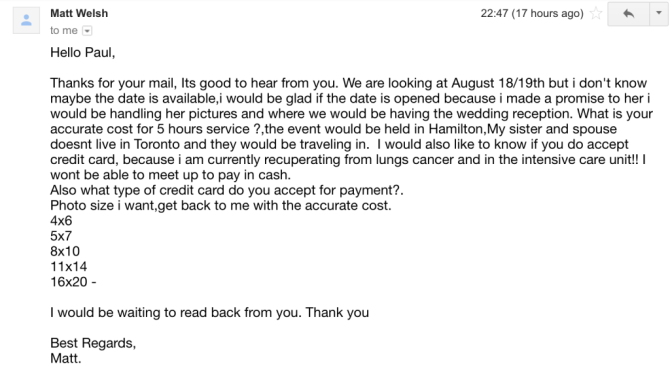 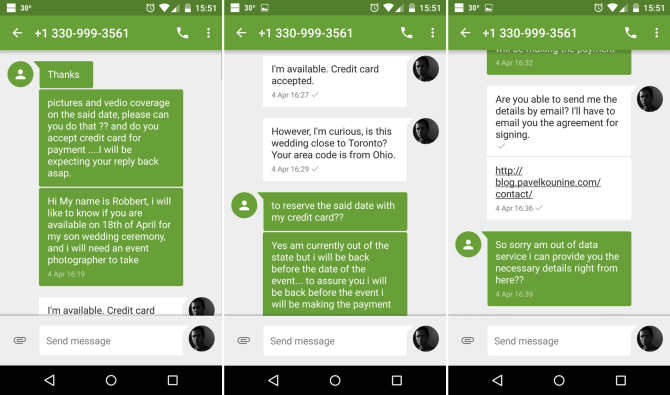 The first three messages are in reverse order. Read from top to bottom. Notice how he introduces himself as “Robbert”, but his email address is brianrobertts@outlook.com. The grammar and punctuations are getting out of hand: is he asking questions or making statements? He’s also out of province, not out of state. Lastly, text messages aren’t the ideal medium for conducting multi-thousand dollar transactions. 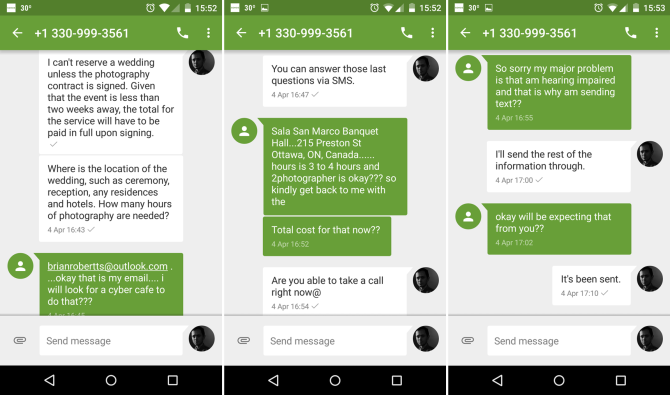 Robertts, that must be the traditional spelling. And will he look for a cyber cafe? Do those still exist in Ohio? He’s asking a Toronto wedding photographer to take a four hour trip to Ottawa to provide 3 to 4 hours of service

Notice how there’s always an excuse for not being able to have a verbal conversation, either because they can’t speak, as implied by the lung cancer, or that they can’t hear, as explicitly stated above. I suspect it’s because the scammers’ spoken English is considerably worse than their written English. In all honesty, if one of these scammers spoke to me with a flawless British, Australian, Kiwi, or North American accent, I would be tempted to overlook the other problems.

Where are the credit card scammers located?

I’m not certain where most of the scammers that contacted me are located. However, one of them was emailing me from Nigeria. I know this thanks to Yesware, which is an email tracker I use to determine whether clients open my messages. The system relies upon the recipient enabling image loading to work. That particular person must have forgotten to disable that feature. Tracking the other exchanges has been fruitless.

But they want to pay you! How is this a credit card scam targeting wedding photographers?

This puzzled me initially. In a fit of frustration during one text message exchange, I broke the rule about remaining professional and brazenly asked how their scam worked and what they were hoping to accomplish. I was genuinely curious! How can receiving payment in exchange for no work at all possibly be risky? Unfortunately, the scammers were of no assistance, since in response to my queries I received several repetitions of the very first message they had sent me. After being blown off, I conducted some research and found three possible theories for how their credit card scam operates.

Theory 1: pay another vendor on their behalf

The scammers want to hire you for their wedding photography using stolen credit card information, but request that you pay another vendor (DJ, florist, etc.) on their behalf because they don’t accept credit cards. The other vendor is guaranteed to be impossible to contact or meet in person, so payment is requested by way of money transfer services like Western Union or MoneyGram. (Something tells me that the DJ or florist happen to live in the same distant city where the scammer’s wedding is being held. It all makes sense now! Heading to a Western Union is definitely easier than driving to Hamilton – or Ottawa – to deliver cash or cheque to a person that doesn’t exist.) Time is of the essence, so the scammer will create some urgency about paying the other vendor immediately after you’ve processed the credit card payment. Shortly after sending the vendor their portion of the payment (i.e., your real money) the rightful credit card holder will dispute the transaction and receive a chargeback for the full amount. Meanwhile, you are now out the full amount you sent the vendor because Western Union doesn’t have a dispute process.

Theory 2: request for refunds and overpayment

This is less likely than the first theory but still very plausible. The scammers intend to pay me with stolen credit card information. Shortly after payment is received, they express regret at the transaction and request a refund using a different payment method such as Western Union. Alternatively, the scammers overpay me and request a refund for the difference, using a different payment method, of course. When the card holder discovers the fraudulent activity and disputes the charges, the initial credit card payment made to me is reversed. Since this happens after sending the scammers their “refund”, I’m out the full price of my service and have no recourse. The major flaw with this theory is the assumption that getting a refund on a wedding photography retainer is as simple as asking (it’s not) and that wedding photographers would be foolish enough to return the money using a different payment method. Another flaw is that I would foolishly accept an overpayment. Perhaps the scammers will initially pay for eight hours of service but then backtrack and say they only need six. In any case, the world isn’t short of fools, so I can foresee how this strategy can work given enough tries. Depending on where the scammers are operating from, two months of attempts to scam wedding photographers could yield the one that falls for the scam and results in a very handsome payout when compared to the average local income. As with most scams, it’s all about a high number of attempts at luring people.

Theory 3: you’re not the target

This is slightly different than the previous theories, because the wedding photographers are not the intended targets of the scam. The scammers contact wedding photographers trying to determine if the credit card information in their possession is good for high value one-off transactions. For instance, shortly after paying me $2,500 for xx-hours of service, the scammers will use the same credit card information to make a large purchase of goods that the supplier is capable of sending immediately (before the fraud is discovered) and willing to ship to an anonymous location (where the shipment can’t be tracked) in the developing country the scammers are operating from. Once the fraud is discovered, the card holder receives a chargeback and the supplier receives bubkis. Meanwhile, the goods are being relayed from one courier to the next on their way to Timbuktu where the scammers plan to receive and sell them for a healthy profit.

Protect yourself from credit card scams

We work in a business that’s hard enough as it is, so be proactive in protecting yourself by not falling for a credit card scam targeting wedding photographers. While there’s no such thing as a risk-free business, when it comes to credit card scams, there are steps you can take to minimize your exposure:

Paul Kounineis a documentary wedding photographer based in Toronto. You can see more of his work on his site, visit his blog and interact with him on Facebook, Twitter and Instagram. This article was also published here and shared with permission.