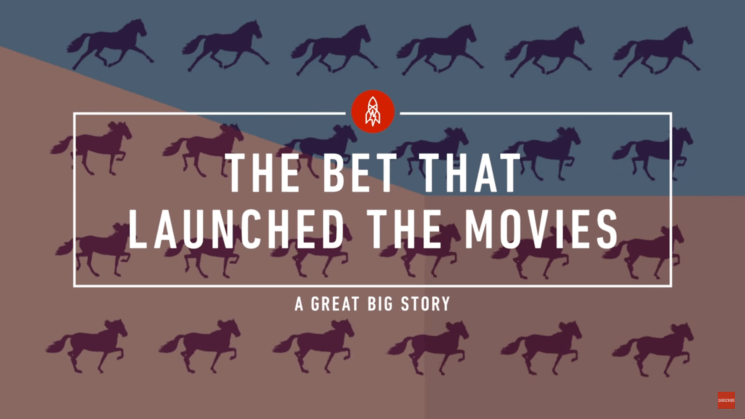 Do you remember the first stop-motion movie, with a galloping horse? Eadweard Muybridge made it in 1872, and the funny thing is – the first stop-motion movie was made because of a bet. The question was: do all four of the horse’s hooves leave the ground at the same time at any point of the gallop? And Leland Stanford, the founder of the Stanford University, hired Muybridge to help him settle the bet.

Stanford claimed that, at some point of the gallop, all four of the horse’s hooves are in the air. Some of his colleagues took a common stand that one foot is always on the ground. It was a popularly debated question of the time, and it was Muybridge’s task to provide the answer using his photographic knowledge.

Now, you can imagine that cameras in 1872 couldn’t really capture the things moving quickly. Movie cameras still didn’t exist, so it was out of the question. So, Muybridge had to get creative. He experimented with an array of 12 cameras. He used them to photograph a galloping horse in a sequence of shots. His initial efforts seemed to prove that Stanford was right, but he still didn’t have the process perfected.

In 1878, Muybridge raised his creativity and skill on a new level. He set twelve wired triggers connected to shutters for cameras. He spaces them evenly along the race track to capture the galloping horse. As the horse galloped the race track, it set off the triggers and made every camera take a photo with less than half a second difference.

The photos showed that Leland Stanford was right, and obviously, he won the bet. But this invention was a winning situation for all of us. Muybridge later invented a zoopraxiscope, which is considered an early device for displaying motion pictures. Thanks to photography and his invention, the cinematography was born.

[How One Horse Inspired the Invention of Movies | Great Big Story]