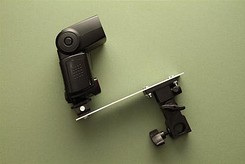 The Westcott Apollo is one of my favorite light modifiers. You’ve seen it featured a ton of times on DIYP. It’s one of the more bought items on the Gear Guide, and we like it so much that we even gave one away a while back.

If you wanna see it in action, check out how Benjamin Von Wong pushed it to the edge with fireworks (or a more traditional shoot by Zack Arias).

Anyhow, the unique softbox-like light with the umbrella ease and strobe-friendliness makes it a great tool to have in your on location lighting box (or bass case).

There is only one small thing which is not perfect about the Apollos, they don’t tilt. Really. If you are shooting with an Apollo on a light stand, you are pretty much limited to having the box point forward or sideways. It is not trivial to have it look 45 degrees down.

Basically, the Apollo gives you two options: Great light, with the strobe very close to the back screen, and almost no tilt. OR, you move the strobe closer to the shaft base (the zipper on the bottom of the Apollo allows this) to tilt, but then you risk hot spots.

There are three ways to solve this: ask a VAL (voice activated lightstand) to hold the light stand diagonally for you, use DIYP’s double flash bracket and mount one or two strobes horizontally, or use a boom stand.

Flickr user Snappuppy can with a DIY that fixes that. Basically, it is an extension that lets you push a light stand at the center of the Apollo (tilt, checked!), while having the strobe pushed all the way to the back (good light, checked!). Very simple, yet very smart. 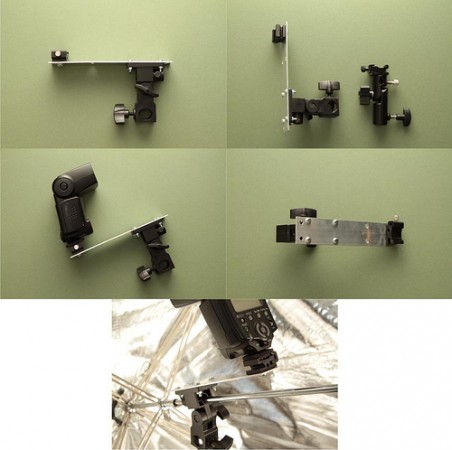 If anybody at Westcott is reading this, it would be great to have a part like come bundled with the Apollo – it would make the Apollo even perfect’er.