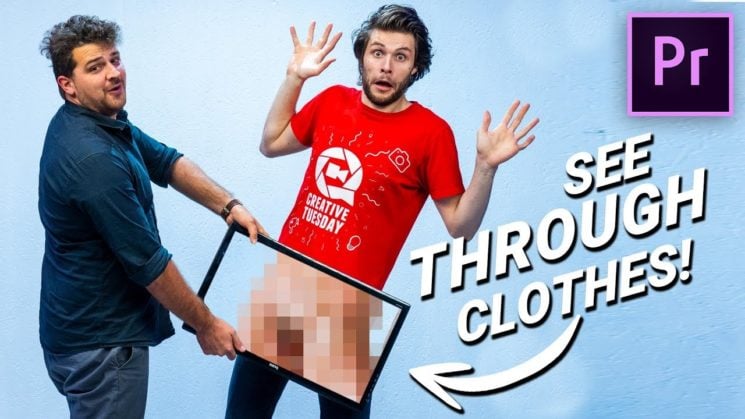 Green screen is a popular and useful tool for creating all kinds of visual effects. You can DIY it, you can even paint it, but there are some awesome green screen tricks which don’t even require it! In this video, Jordy and Yannick of Cinecom.net demonstrate four of these tricks you can pull off without using an actual green screen, but by chroma keying smaller objects.

For the first trick, you’ll need a phone or a tablet with an all-green image set to full screen. Make sure to film from a tripod because you’ll be combining two shots in Premiere Pro.

For the first shot, film yourself in a specific pose and have another person move the phone or tablet in front of you. For the second shot, strike the same pose but this time remove your clothes. Or wear something different, or put a skeleton or a mannequin in your place, or… Just some ideas. When you combine the shots, you can create see-through-clothes or an X-ray device.

2. Moving objects with your mind

This time, you’ll need a simple green straw. Stick it to the back of your desired object. In Jordy’s example, the object’s a banknote. Again, shoot from a tripod.

For the first shot, have someone move the object attached to the straw. For the second shot, just film the empty room. Combine the shots in Premiere Pro and create a weird mind-control trick!

3. Stealing drink from a video chat

For this one, you’ll need a piece of green paper. First, film a monitor from a tripod. Then remove it and change the background behind you. Place the green paper at the same height as your monitor was and put a beverage of your choice onto it. Then, sit behind and drink with a straw. When you combine the shots, you’ll create a crazy illusion of drinking a beverage from the “real world” while your face is on the screen. It looks like this:

This trick was inspired by the iPhone XS ad:

First, film yourself at the eye level. For the second shot, place your cat on a blue t-shirt or cloth (good luck with having the kitty stay where you want). Make sure to film at the eye level so that the perspectives match when you combine the shots. A problem you may encounter is the shadow, so pay attention to it and make it look natural in Premiere Pro.

Do you have any cool green screen tricks you’d like to share? And have you tried any of these so far?