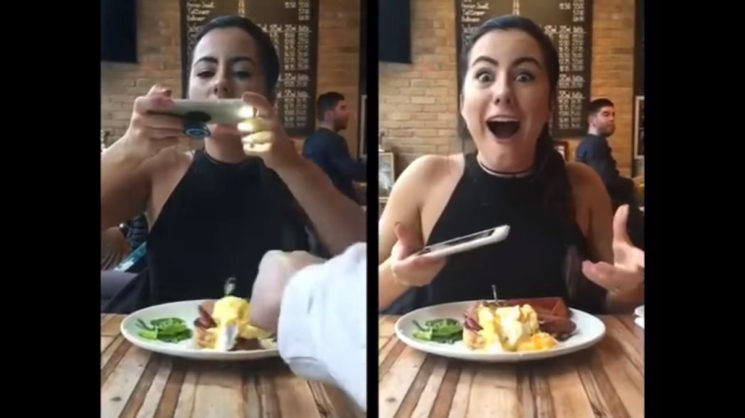 Taking photos of food before the meal has gone so far there’s even a restaurant giving you a kit for taking better photos. But if you just don’t understand this trend, a recent video from Kevin Freshwater will make you happy.

Kevin destroys the Instagram food photos for his friends a split second before they take the snap. I couldn’t stop laughing at their reactions, and I must admit – this is something I’d gladly do sometimes.

Before you play the video, have in mind there’s some strong language. Some people are really sensitive to their Instagram food snapshots.

Although it may not be nice to his friends, Kevin messes with their nicely arranged food just before they take the shot. It’s childish, I know – but I think it’s pretty funny and harms no one. The food doesn’t look that pretty anymore, but it’s still delicious. And no one cares about Instagram snaps of food anyway.

While the friend’s reactions are hilarious (and Kevin’s laughter is contagious), I must admit he really was unfair to the last guy. Half of his cookie ended up on the ground, I’d probably be pissed, too. But I hope he bought his friend a new dessert. :)

I found this video extremely funny, but I can imagine other people finding it extremely annoying. Which group do you belong to? Would you do something like this? Or would you be furious if a friend did it to you?

« Outex launches clear, lightweight and modular underwater housing that fits in any camera bag
How to find inspiration and get those creative juices flowing »