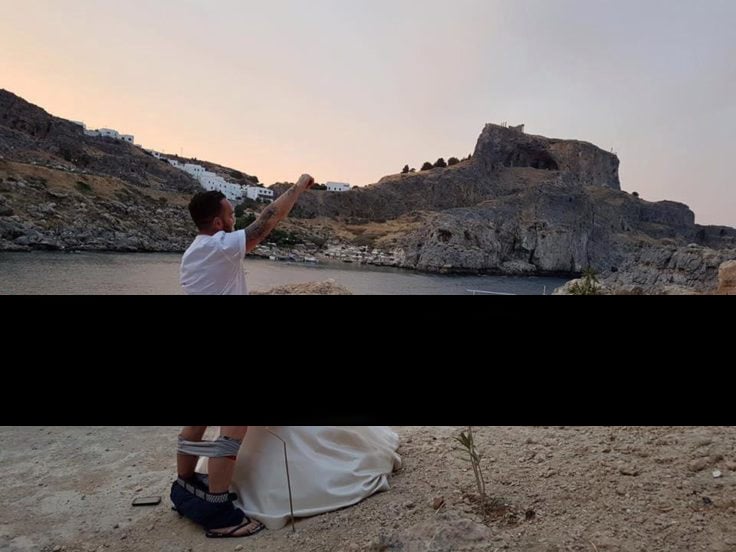 I guess all couples want to have interesting and memorable wedding photos. But after a British couple made their photo on the Greek island of Rhodes, they caused quite an outrage from the island’s top bishop.

Matthew and Carly got married in Rhodes. In front of the monastery of St Paul, still in the wedding attire, they simulated oral sex for the photo. The Of course, it was a joke, in accordance with their sense of humor. But the bishop didn’t find it funny, and as a result – all foreign weddings are now banned at this holy place.

Before you proceed, I must warn you that the photo is pretty NSFW, so be careful who’s standing behind you. 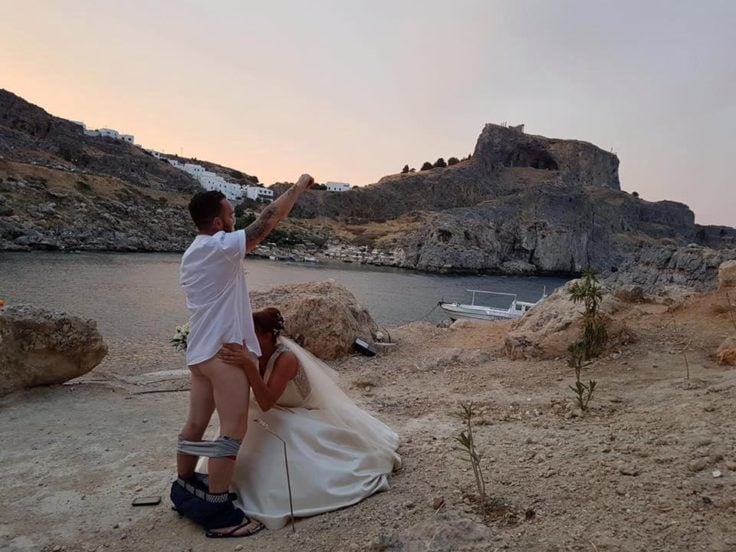 Giorgos Eleftheriou is president of the Lindos community on the island. As he told The Times, the Greek cherish the traditions and the sanctity of their religious sites. According to him, this behavior is disgusting and he just didn’t want to allow it to prevail.

The fierce reaction from the bishop spilled over to hundreds of other couples. Eleftheriou says that “hundreds of soon-to-be brides from Britain and all over the world [are] calling [him] today in tears because of this decision.” The “wedding ban” resulted in hundreds of weddings to be canceled – all because of one (tacky) photo.

According to Carly, the bride in the photo, this was all just a joke. She says they’d always been planning to post the photo, but they couldn’t have thought it would become this popular. As she tells Daily Mail, “the whole thing went mad.”

It’s not clear whether the “wedding ban” is a permanent decision or just temporary. But I think it opens up quite a lot of questions. First of all, there’s the question of respecting other cultures and their holy places. I will remind you, a photographer and his model got arrested in Egypt because of a nude photo shoot inside an ancient temple. Another nude shot made Maori community angry, as it took place on their holy mountain. These are nude shots, and the photo that took place in Rhodes is a bit more… hardcore, even though it’s just a simulation. I’m not religious at all, but I think simulating oral sex in front of a monastery or any other holy place is a bit too much.

But as for the photo itself – call me childish, but I think it’s funny. It’s tacky, but that totally suits my sense of humor. However, if it took place elsewhere, it would have saved them from a lot of fuss. And not just them – but also hundreds of other couples who now have to postpone their big days.

While we’re at the other couples – we get to the “wedding ban” decision. I must say that I love Greek people and respect their culture. But to me, this seems a bit like a too radical decision. If it’s temporary, then it can be sort of a warning. But if it turns out to be permanent, maybe it’s a bit too much. Not all couples would take a photo like this or disrespect the holy place in any other way. Also, I don’t think Matthew and Carly did it on purpose. It was just a joke that, eventually, went really wrong.