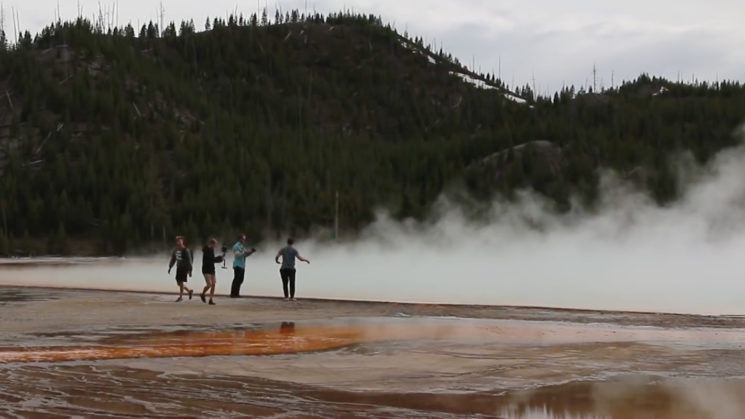 Some of you will remember the story of four filmmakers caught on camera trampling the Grand Prismatic Spring in Yellowstone a few months ago. For those that missed it, the video is linked below. Needless to say, it sparked quite the outrage. Not just from the photographic community, either, but from the  public at large.

When the video surfaced, the Internet was quick to identify the foursome as Canadian filmmakers shooting for “High On Life SundayFundayz“. Federal arrest warrants were then issued. These were later quashed at the request of their attorney, Thomas Fleener so that the men could re-enter the US without immediately being arrested. Fast forward to now, and the case is being heard.

One of the men, Hamish McNab Campbell Cross has pleaded guilty to foot travel in a thermal area and disorderly conduct. He was sentenced to five years of unsupervised probation and has $8,000 to pay in fines. Cross has also been banned from all federal lands administered by the Bureau of Land Management, Interior Department and the Army Corps of Engineers.

The other three defendants – Jurtis Cooper Price-Brown, Alexey Andriyovych Lyakh and Charles Ryker Gamble – also appeared in court, pleading not guilty. Attorney, Fleener, advised that they would have to plead not guilty and have new counsel appointed. Fleener had represented all the men since the charges were first filed. Last week, he withdrew from the case citing “conflict of interest”.

The new lawyers and the court will sit down on Dec. 7 and figure out what to do next.

A jury trial is completely off the table because the crimes aren’t serious enough.

This means the three men will either agree to a plea deal or face a bench trial where a judge will decide their fate. Fleener said that “The United States Attorney is contemplating jail time for the remaining three”. If convicted, they will likely serve sentences at the Big Horn County Detention Center, reports JH News and Guide.

Despite no longer being their representation, Fleener still publicly defends the group, saying that “they’re completely misunderstood” and “The United States has made them out to be the worst of the worst”.

Well, I’m not really inclined to agree with Mr Fleener. I think they deserve whatever happens to them. We’ve all done stupid stuff when we were younger, and we all face the consequences eventually. They’re no different to anybody else. Hopefully this will serve as a clear warning to others.

Is an $8K fine and unsupervised probation too severe a punishment? Not severe enough? Should the punishments be harsher to help deter others in the future? Tell us what you think in the comments.

[via JH News and Guide]