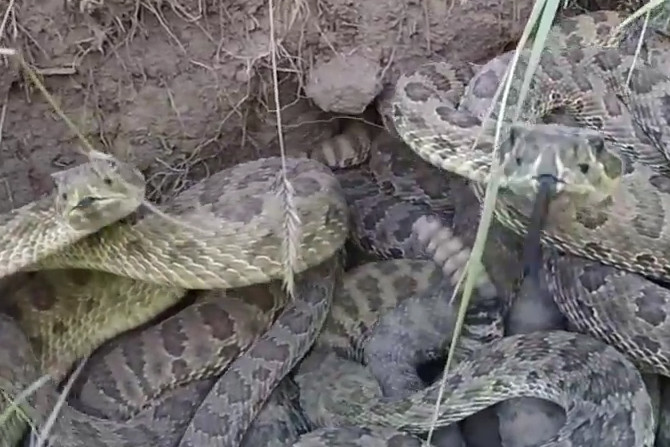 Among the thousands of boring GoPro videos uploaded to the internet each day, there are a select few that still offer what made these cameras so exciting in the first place – point-of-view angles and the ability to film where no camera could go before (at least not as easily, cheaply or safely).

One of these videos, uploaded by Michael Delaney and currently making its rounds online, is that of a GoPro that gets right up close to a pile of rattlesnakes – and then falls right into the pile after a snake strikes at it.

I guess there are two lessons to be learned from this video:

This is without a doubt the kind of footage you could not before the GoPro era, unless you worked for the BBC or National Geographic.

However, the ability to get so close to the fascinating snakes, and the additional motivation to do so since it can be recorded, does have a downside.

As can be seen in the video, the camera dropped to the ground only after a third snake struck it. Other than the fact that striking the hard plastic housing of the GoPro can’t be good for the snakes, the animals were obviously distressed.

When viewing wildlife, and especially when documenting it, I am a firm believer that people should observe with as little harassment as possible. In my opinion, Delaney should have backed off as soon as the first snake felt threatened enough to strike at the camera (if not sooner).

Judging by previous videos posted by Delaney, I assume this video was also recorded in Montana and was definitely not his first encounter with rattlesnakes. His YouTube account contains at least six videos of rattlesnakes, including one time lapse:

Either way, hopefully this video will be used to educate the public about rattlesnakes rather than promote more hate and ignorance towards them.

I was lucky enough to encounter 50+ rattlesnakes in the wild several years ago and must say it’s a thrilling experience. These are magnificent animals and I’m happy Delaney decided to share this amazing phenomenon.

I’m even happier than he didn’t try and take a selfie with a rattlesnake.