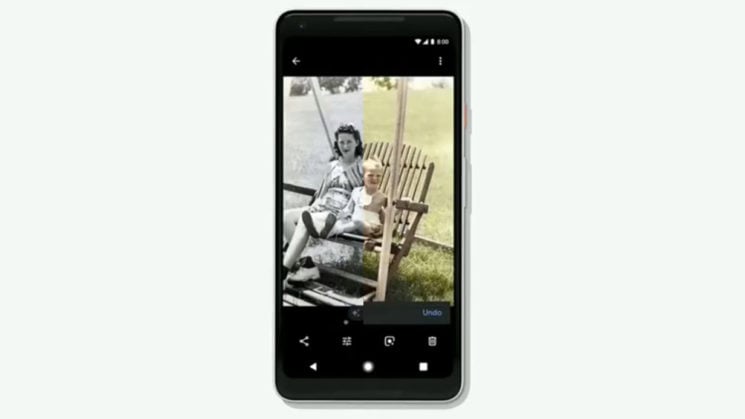 At yesterday’s 2018 I/O keynote, Google has introduced some interesting improvements to Google Photos. One of the features I found the most interesting is that Google Photos will soon be able to colorize your old black and white photos with a single click. Other than that, there are a few other new features that let you improve or share photos in a second.

In the video above, you can see the preview of the upcoming features of Google Photos united under the Suggested Actions. All these features will use AI to automatically suggest various small actions that can make your life easier or your photos better. The AI will recognize the people in your photos and suggest that you automatically share the photos with them. If you take a photo of the document, Google Photos will automatically convert it to PDF and make it much easier to read.

As for the image enhancements, you’ll get exposure adjustment suggestions and be able to enhance the photo in a single click. Google’s AI will also be able separate the subject, suggest that you convert the background to black and white and leave the subject in color. In the demonstration, it does a pretty good job. Now the question is if selective coloring is your cup of tea or not.

As for the colorization, I think it’s the most interesting feature. In the demo, it looks like Google’s AI does a decent job colorizing an old image, even though it’s fully automatic.

So far, there have been several solutions for colorizing black and white images. One of them is, certainly, doing it yourself in Photoshop. The others do it automatically: more or less accurately. Adobe is also developing their own colorization software that doesn’t only colorize the photo, but also adds shades and textures as well. So I’m a bit surprised it took Google so long to develop this feature and include it in Google Photos. Nevertheless, this and the other features are coming soon for Android and iOS users. Google doesn’t specify exactly when, but it will likely be in the following couple of weeks.

« If you’re a beginner photographer, here are 12 critical mistakes you need to avoid
People are sharing hilariously bad stock photos of their jobs and they will make your day »